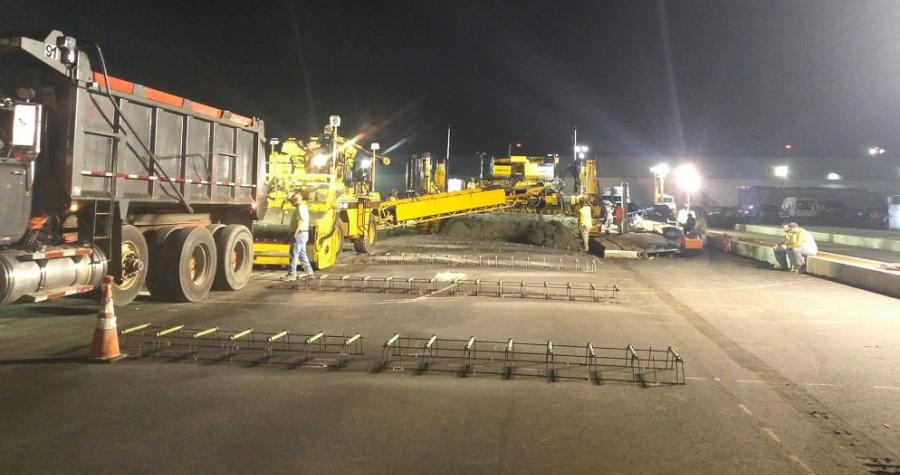 Because most of the airport traffic and work happens during daytime, night paving operations further minimized interruptions at the airport.

Several million bottles were destined for a landfill when they hit a stop sign. The new destination was a manufacturing site where the bottles were transformed into a unique aggregate for a paving project at Philadelphia International Airport (PHL). 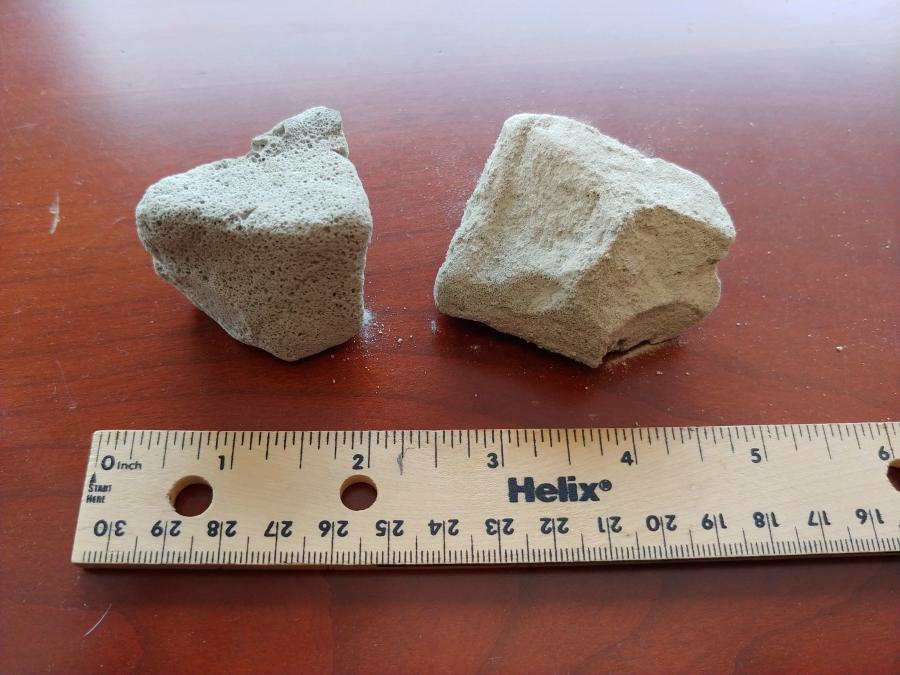 The material called ultra-lightweight foam glass aggregate (UL-FGA) was grayish in color and looked like pumice stone. The substance had been used before on projects at PHL.

The paving project was for the construction of a remain overnight (RON) parking apron on the airport's west side. The year-long project is expected to be completed in June 2022 at an approximate construction cost of $32 million. The project was aided by a $2 million grant from the Pennsylvania Redevelopment Assistance Capital Program.

The RON will serve as a convenient place to park airplanes and keep the terminal gates clear of itinerant aircraft, allowing easier on-time departures and arrivals for airlines. In addition, this area will serve as the initial expansion of cargo facilities for the airport in the future.

"I see the west-side of our airport as a natural site for expanding our cargo operations," said Api Appulingam, deputy director of aviation, capital development for the airport. "We want to become one of the premier cargo locations for the East Coast. This new RON area is a first step in that. It will provide easy access to cargo operations and runways."

The airport announced that it will expand its air cargo facility footprint by 136 acres and almost triple its cargo building square footage from 600,000 to 1.4 million as part of the Cargo Expansion Strategy.

RON Project Manager Larry Allen faced several challenges during the construction. The soil was soft, and the water table was high. In addition, the airport lies adjacent to the Delaware River, so environmental concerns needed to be considered.

"Because of the soft soil, the existing subgrade would need to be surcharged and left to settle for a minimum of six months before paving could begin," he said. "By using the UL-FGA, which was much lighter, settlement from the proposed pavement section was mitigated, and we could begin paving much sooner." 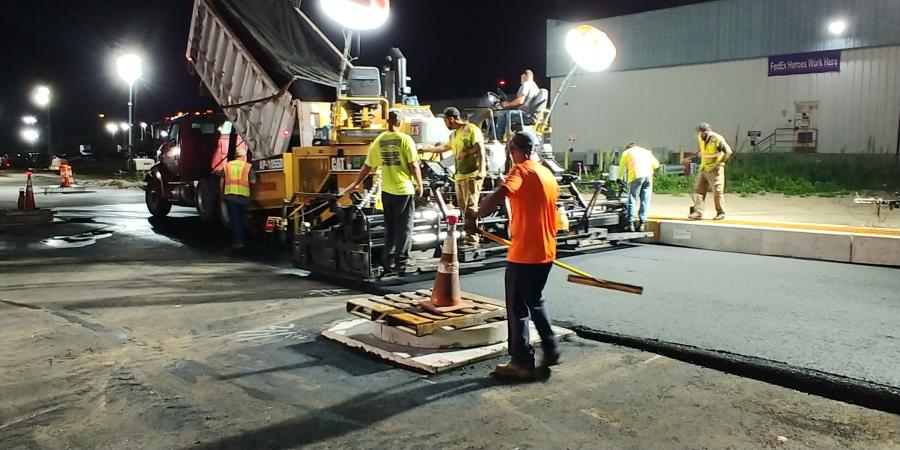 The undertaking required some 14,300 tons of asphalt pavement and 25,500 cu. yds. of concrete pavement and retaining walls. In addition, concrete precast structures for drainage and electrical infrastructure were incorporated into the project. The job also included 82,000 cu. yds. of the UL-FGA, which is one of the largest known usage of the material in any single project in the United States.

Many airport paving projects require severe deadlines because runways and taxiways can be out of commission for only a short time. At PHL, airfield operations are not directly affected due to the intricate construction phasing of the RON project, where most of the construction area was delineated outside of the airport fence line. Also, COVID-19 caused a sharp decrease in passengers and flights required. Still, work crews needed to work at night to get the project ready for when airlines would be back at a normal pace.

Workers placed the foam glass aggregate before asphalt was placed for the base layer using a paver and roller to achieve compaction. This project utilized a P-403 FAA Specification for asphalt base. The aircraft apron surface consisted of a 17-in. thick concrete pavement (FAA P-501 Spec).

Although the unusual aggregate solved one problem, enabling the job to begin quickly, another issue surfaced.

The groundwater level continued to be a problem for completion of the project.

"The contractor is expected to use dewatering wells to lower the groundwater elevation in order to complete the excavation," said Allen.

The dewatering operation will also make it possible for the contractor to install a managed release basin for stormwater control and drainage.

James J Anderson is the general contractor for the project and SJA Construction handled the paving. 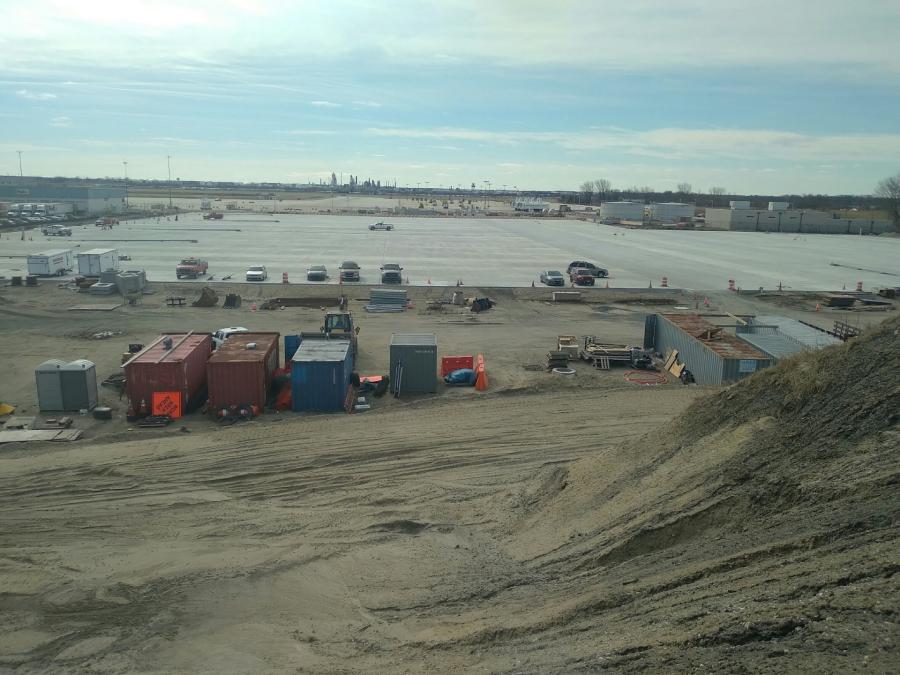 Using the UL-FGA to construct the lower layers of the RON would have given most project managers heartburn. But Allen and the design team led by ADCI checked it out and found that the glass aggregate had been used for more than two decades in Europe with good performance results. The added benefit of having a dependable supplier located nearby made the decision even easier. Not only had the unusual aggregate been used at the airport before but it also was used for construction projects on I-95 north of Philadelphia.

As with any airport construction project, safety must be planned and executed. Petroleum pipelines bordered the west side of the airport where the RON construction took place. The operators of the lines were consulted during preconstruction and were on site while work was conducted near the pipelines.

Once on the airport property, trucks delivering the UL-FGA, ballast stone, asphalt and other materials were carefully controlled and made a minimal impact on normal airport and roadway traffic in the vicinity of the project site. Since most of the airport traffic and work happens during the daytime, night paving operations further minimized interruptions at the airport.

Allen believes that future paving operations at the airport will look at a geotechnical analysis of the water table. Test wells will probably be required. Of course, the water level will vary at different locations and sometimes will require unusual solutions. If it does, the project teams leading future projects will be ready.

Airport officials estimate that the cargo expansion program could create up to 22,000 "job-years" during construction (a job year is a full-time construction worker for a year). Up to 6,000 permanent jobs will be created when West Cargo is developed. More than 28,000 jobs will drive billions of dollars in direct economic impact to the region in coming years.

"The airport project will improve the efficiency of operations at the terminals and set the stage for an expansion of cargo activities," said Tim Kearney, Pa. state senator for the 26th senatorial district, which includes Chester and Delaware counties. "Not only will the RON create great jobs for our construction and building trades, but the ensuing cargo activities will create permanent good jobs for people in this area." CEG