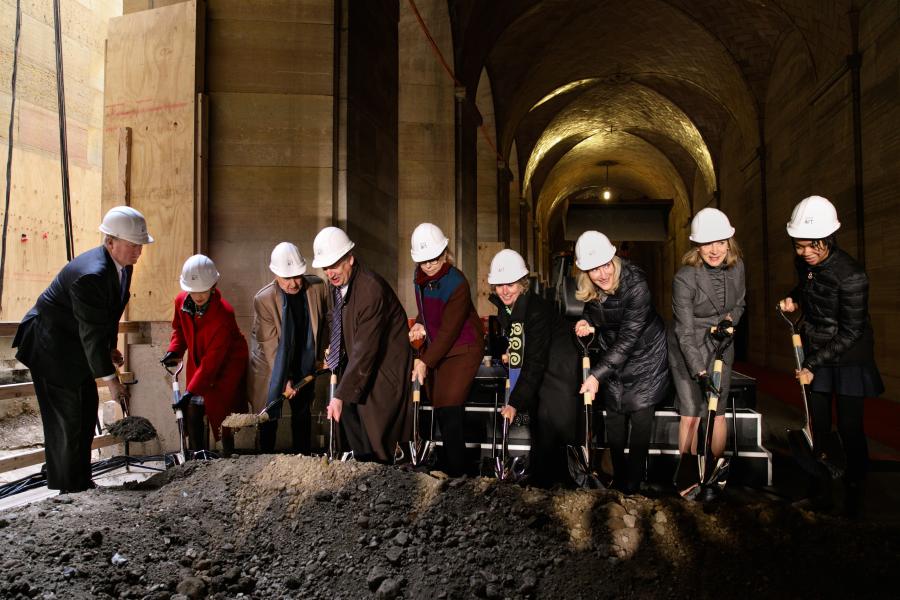 The Philadelphia Museum of Art begins a new phase of transformation and renewal, supported by a $525 million campaign. A key part of this campaign, the Core Project will create a significant amount of new public space within the footprint of the landmark building and add 23,000 sq. ft. (2,137 sq m) of new gallery space for the display of the collection. The Philadelphia Museum of Art has officially begun the Core Project, a physical transformation and renovation of its main building led by visionary architect Frank Gehry. As the next phase in the implementation of the Museum's Facilities Master Plan, the Core Project will add 67,000 sq. ft. (6,225 sq m) of new public space, an additional 11,500 sq. ft. (1,068 sq m) for the display of the Museum's rich holdings of American art, and an equal amount of gallery space for the presentation of contemporary art.

Combining much-needed infrastructure improvements with a reorganization of circulation at the heart of the building, the Core Project will greatly improve the experience of the Museum for its visitors, dramatically enhance access for the community, and provide more room for the display of its renowned collection. The Museum will remain open to the public and fully operational throughout the construction period, which will be completed in approximately three years.

Budgeted at $196 million, the Core Project is part of a larger fundraising effort — It Starts Here: Campaign for the Philadelphia Museum of Art — that will enable the Museum to achieve ambitious goals in education and public programming, improved access and community outreach, and the innovative use of new technologies to fulfill its mission and more effectively engage the next generation of audiences, locally as well as internationally.

This $525 million comprehensive campaign will renew and improve the Museum's landmark main building, strengthen its endowment, and support new initiatives that will ensure that it remains one of the city's most dynamic public institutions and a leader among its peers. The largest cultural fundraising campaign in Philadelphia's history, It Starts Here has already raised more than $326 million, just more than 62 percent of its total goal. Three Trustees are spearheading this effort as Campaign Co-chairs: Barbara B. Aronson, David Haas, and Katherine Sachs. Trustee Bruce E. Toll serves as the Campaign's vice chair.

To date, the Philadelphia Museum of Art has received generous lead contributions for It Starts Here from Marguerite and Gerry Lenfest, the late Robert L. McNeil, Jr., and Constance and Sankey Williams. Additional leadership gifts have come from the late Daniel W. Dietrich II, David Haas, Keith L. and Katherine Sachs, the Commonwealth of Pennsylvania, and the city of Philadelphia. With such early and strong support in hand as it breaks ground, the Museum is assured of achieving the campaign goals and completing the Core Project.

Tom Wolf, Governor of Pennsylvania, stated, "Great cities have great art museums. This was the principle that drove the civic leaders of the early 20th century to construct a magnificent building in the middle of Fairmount Park that we now know as the Philadelphia Museum of Art main building. In the almost 90 years since it opened to the public, the Museum has proved to be a vital educational resource and economic contributor. As the city of Philadelphia experiences a renaissance, the Museum continues to play a critical role in the vibrancy of this great city. That is why as Governor of Pennsylvania I am thrilled to support the Philadelphia Museum of Art's transformation through the Core Project."

Jim Kenney, Mayor of Philadelphia, stated: "One hundred years ago, civic and political leaders set out to achieve a bold vision, to construct a new art museum building that would increase the visibility of the city and secure its place in the world. And when this new building was completed in 1928, our city received both a cultural heart and a source of civic pride. Now, a new generation of Philadelphians will be able to enjoy this architectural treasure. This museum welcomes hundreds of thousands of visitors from across the region, country, and world. In a given five-year period, this level of activity has an economic impact on the local economy of more than $1 billion and generates over $80 million in tax revenue. The completion of this project is likely to make those numbers grow. This project is not just vital to the institution, but also to Philadelphia. I frequently speak about the impact public-private partnerships have on Philadelphia and its residents. This Museum's formation is a shining example of that. And that continues today; I am proud to announce that my Administration has committed $32.5 million of capital support over the next six years to help fund the Core Project."

The Core Project is part of a long-term facilities master plan developed by renowned architect Frank Gehry. Designed to be implemented in several phases, as time and resources permit, this plan addresses several important goals: the renewal or replacement of antiquated building systems; the reorganization of the interior to improve wayfinding and the addition of new amenities to enhance the visitor experience; and the addition of new gallery space to accommodate a growing collection.

Frank Gehry recalls his first impression of the main building and how he approached this project at the outset: "I walked through the building and I saw that all you had to do was follow the yellow brick road, so to speak. It was all there, and it showed you what you could do."

As its title suggests, the Core Project — the second phase of the Facilities Master Plan — focuses on the heart of the building. The West Terrace will be entirely rebuilt, with integrated ramps to provide greater accessibility. Lenfest Hall will be renovated, and the auditorium will give way to create a grand new public space, the Forum, which will open up circulation to provide visual connections and access to several spaces, such as the Vaulted Walkway. The historic North Entrance off Kelly Drive will reopen. Also included will be a newly designed restaurant, café, meeting rooms, and most importantly, additional galleries for American art and contemporary art. Mr. Gehry and his design team respected the building's original architectural language and materials and applied them to the sections that are being altered or renovated, resulting in a seamless blending of old and new.

Timothy Rub, The George D. Widener director and chief executive officer of the Philadelphia Museum of Art, stated, "The promise of the Museum — what it has come to symbolize to Philadelphia over the last century — is matched, indeed exceeded, by the promise it represents in the 21st century. Today, we are thrilled to officially break ground on the latest phase of our Facilities Master Plan. When it is completed in 2020, visitors will see how Frank Gehry's simple, yet brilliant, design improves the experience and enhances our ability to display more of the collection. This project is complex and touches many parts of the Museum, but we are committed to remaining open to the public throughout. This renewal of our 90-year-old building through the Core Project will enable us to make progress in achieving the four goals laid out in our 2012 strategic plan: to attract new audiences, enhance the Museum experience, activate the collection, and strengthen our commitment to community. As Philadelphians, we are fiscally prudent, and have elected to proceed, with nearly two-thirds of our campaign funding now in hand, and the confidence that we can achieve our fundraising objective within the next three years."

Gail Harrity, president and COO of the Philadelphia Museum of Art, states, "The changes we are now embarking upon require sensitivity to the unique and defining character of the Museum. There are spaces that will receive a light touch and others that will be bold and transformational in character. Windows that have been long enclosed will now offer exceptional views of the Philadelphia skyline. Visitors will experience a soaring new public space at the heart of the building and be able to access it from an entrance that will be open to the public once again after nearly half a century. They also will enjoy a new restaurant and café that bear Frank Gehry's unmistakable touch and that open out to the East Terrace. This is about restoring, preserving, and at the same time reimagining the building for Philadelphia's future."

The Museum opened a new installation of Frank Gehry's renderings and architectural model in gallery 154 on the first floor. This will remain on view through late 2018. More information, including a short video about the Core Project, can be found at www.philamuseum.org/ourfuture.

The Museum will continue to assess to the timing to undertake the implementation of the final phases of the Facilities Master Plan, which include a new auditorium, additional galleries under the East Terrace that will be accessible from the Vaulted Walkway and Forum, and further expanded educational facilities.