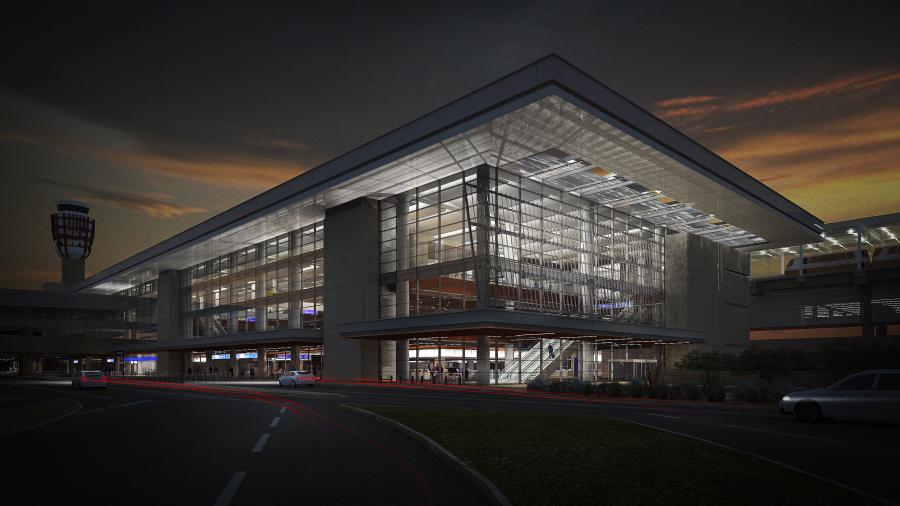 Sky Harbor serves nearly 40 million passengers every year. To keep pace with growth in the area, the airport will reportedly need more terminal space and parking, better roads, airfield improvements and options for moving people and airplanes around the airport more quickly.

Upcoming improvements to Sky Harbor are often referred to as the Airport Development Plan.

As part of this plan, the Terminal 3 Modernization Program will enhance the customer experience for travelers by providing a more efficient way of getting through the terminal. It is planned as three distinct components to maximize flexibility and minimize impact to travelers.

According to Heather Lissner, acting public information manager of the City of Phoenix — Aviation Department:

• Phase 1, the Terminal Processor phase, will create a larger security checkpoint to help travelers get to their gates faster and a modernized, expanded airline ticket counter space to make check-in more convenient. The terminal will receive overhauled HVAC systems, vertical circulation systems, and new finishes in the interior and exterior.

• Phase 2, the South Concourse component, will create a new south concourse with 15 gates for passenger travel after the current concourse is razed. Additional gates built at this concourse will enable the closure of Terminal Two to airline operations. Major improvements in this area will include new food and retail concessions, large airline hold rooms and new customer amenities.

• Phase 3 will involve terminal passenger flow reconfiguration and concessions enhancement. It will provide an upgraded customer experience for passengers using the north concourse, including food and beverage opportunities and enhanced customer amenities with new interior and exterior finishes.

The entire program represents an approximate cost of $590 million, which will reportedly be financed through airport revenues such as parking, concessions and tenant fees. No local tax dollars will be used.

“Every airport construction project carries challenges unique unto themselves,” said TG Mason, project director of HuntAustin Joint Venture. “Airport renovations such as Sky Harbor's Terminal 3 improvement require extensive planning and ongoing coordination. The project will be completed in phases to ensure the least amount of disruptions to customers. Additionally, a team with various experience in airport construction is crucial to the success of these types of projects.”

Mason explained that Terminal 3 is a design-build project.

“Although design-build is surging in popularity, it differs from the traditional design-bid-build delivery method,” he said. “In the design-build process, work flow becomes integrated between designers and contractors serving the client from initial conception to completion. The project team is working on a new open floor plan with glass enclosed walls and skylights that show amazing views of our beautiful vistas.”

According to Mason, mechanical and electrical equipment is a large part of the project. A new central plant is being built to supply air conditioning. New passenger boarding bridges and related support equipment will be provided. The program entails updating/expanding systems such as fire protection, security systems, fueling systems and finishes.

“Every subcontractor working at Terminal 3 plays an important role in the overall success of the project,” Mason said.

“There is still a lot of bidding and procurement to take place,” Mason said. “These contractors are only involved with the processor component thus far. HuntAustin Joint Venture will still put out future bid packages for the North and South Concourses.”

The city of Phoenix owns and operates the Phoenix Airport System, which consists of Sky Harbor International Airport, Deer Valley and Goodyear airports.

Phoenix Sky Harbor International Airport is known as “America's Friendliest Airport.” It is one of the 10 busiest in the nation for passenger traffic, with a $79 million daily economic impact. It covers 3,000 acres.

A typical day includes more than 1,200 aircraft arriving and departing, with more than 100,000 passengers.

Terminal 1 was the first “modern” terminal built. It was completed in October 1952 and cost $853,000. Terminal 1 was demolished in 1990, but the other terminals were never renumbered.