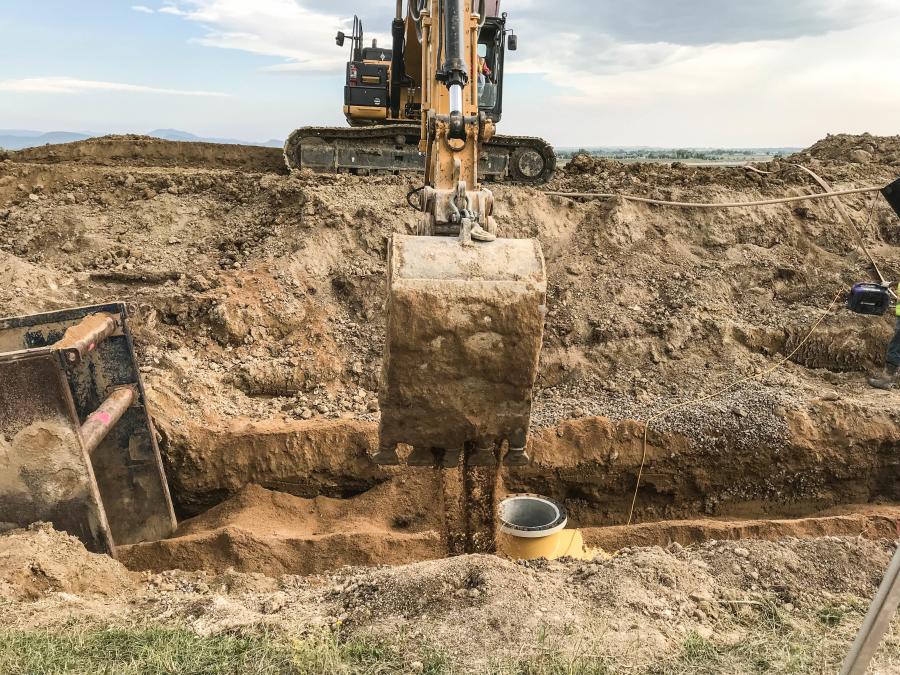 At a cost of $45 million, construction crews in northern Colorado are working on a pipeline project that will provide a secure, year-round water supply in Boulder and Larimer counties. Upon completion, the Southern Water Supply Project II (SWSP) pipeline will bring additional Colorado-Big Thompson Project and Windy Gap Project water to the city of Boulder, town of Berthoud, Left Hand Water District and the Longs Peak Water District.

"The project will increase the reliability and delivery capacity for four water providers in northern Colorado," said Stephanie Cecil, P.E., water resources project engineer at Northern Water. "The participants have been pursuing the project since 2008, and the project is now proceeding because all appropriate permits and easements have been acquired." 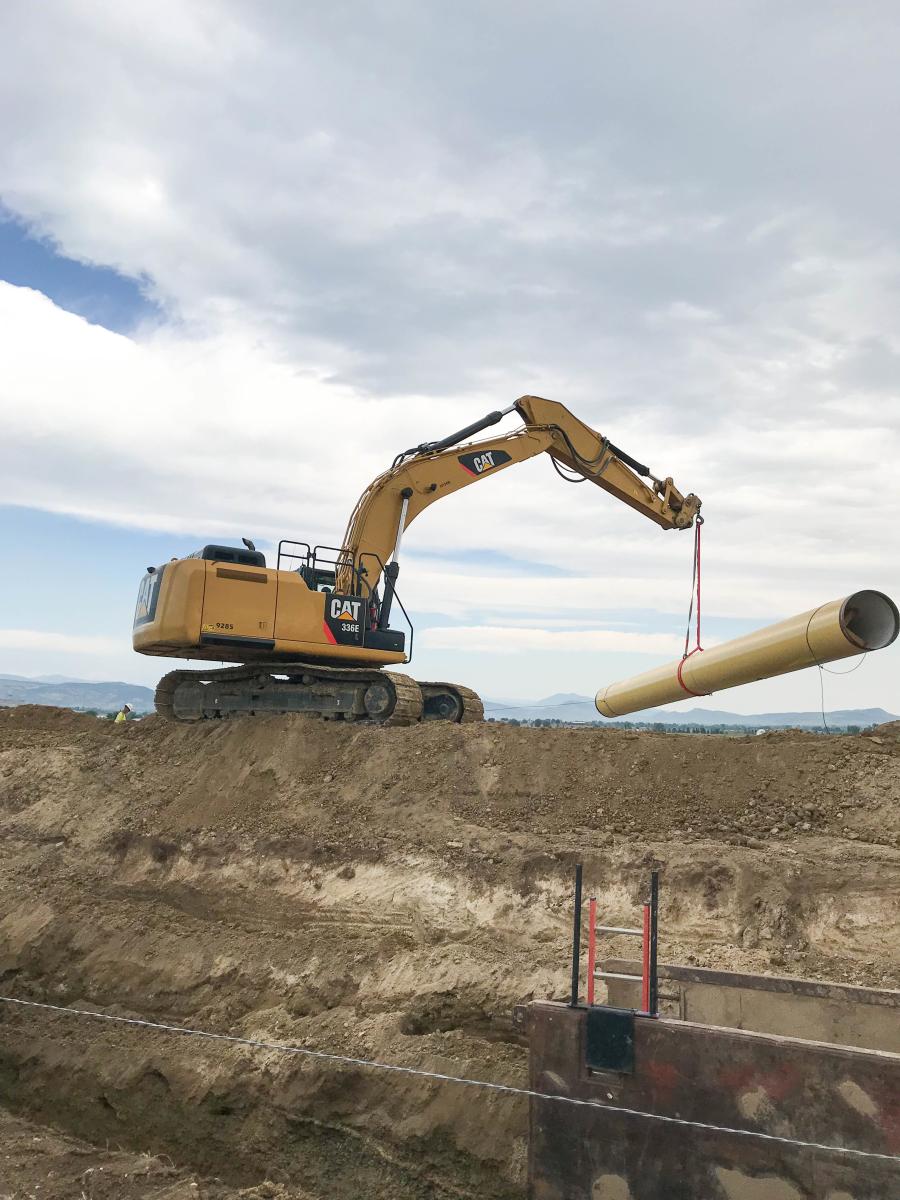 Work on the project began in 2018, with all costs to be covered by the project participants. There have been very few delays caused by the construction, because most of the pipe is going into private easements. Cecil said, overall, the response from homeowners and the community has been positive.

"We have kept in close communication with property owners and local governments. We use an interactive website to allow affected residents to see when construction may be occurring near them."

According to Cecil, sending water through a pipeline instead of an open canal improves water quality.

"Protecting water from variability of environmental factors means it retains its high quality when it arrives at municipal treatment plants, and the water can also be delivered year-round. Many open canals do not operate through the winter in Colorado.

"Our mission at Northern Water is to provide water resources management, project operations and conservation services for project beneficiaries. This project meets that mission well."

One of the biggest challenges during construction involves the project surroundings.

"Our commitment to protecting sensitive species has meant we have had to be very deliberate in our scheduling. That means we have to be nimble enough to deploy construction teams to ensure the protection of raptors and endangered species, while robust enough to get work completed on time. Through our work with partner agencies in the corridor, we have been able to accomplish those goals."

The project calls for more than 20 mi. of steel pipe.

"We have a working area about 80 to 100-feet wide throughout the corridor," said Cecil. "Most of the construction is open-trench, with significant reclamation work being performed after the pipe is installed. For most of the project, it's a 36-inch pressure pipe, with a 32-inch pipe in the final couple of miles.

"We've just completed a pair of river crossings, at St. Vrain Creek and the Little Thompson River. That meant diverting stream flows around the construction area and creating concrete encasements to protect the pipe and the banks of the rivers." 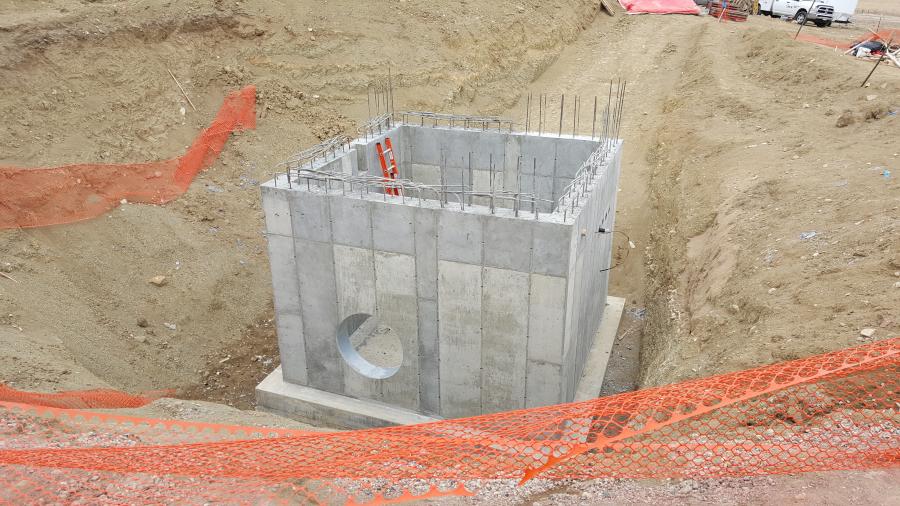 In early 2019, subcontractor Precision Boring Technology completed all the trenchless crossing installations. Finishing the task was considered a project milestone.

"Trenchless crossings occurred at roadways and railway crossings," said Cecil. "There were 13 of them, ranging from about 50 feet to 200 feet. By going trenchless, we were able to minimize the impacts on neighbors and travelers. With those delicate crossings out of the way, crews can now be more efficient in installing pipe for the rest of the project."

Cecil noted that hand-tunneling was used to install the casing pipe, without interrupting traffic or closing down roadways.

"Hand-tunneling is more labor-intensive, but it makes it easier to adjust to and avoid existing utility lines. With a traditional method, conflict with those existing lines could have created problems. In addition, hand-tunneling allowed the contractor to address fluctuating groundwater levels in the area."

As for other work completed or in progress since construction began, said Cecil, "We have four cast-in-place structures planned on the project for tasks such as isolation metering and turnouts. One has been completed, and another is in construction. We have installed about 30 percent of the pipeline length, to date."

Regarding excavation, clearing and other activities required on the project, "We have developed property-specific reclamation plans on the project, and we have worked with each affected landowner to ensure we are meeting their expectations. We have been separating topsoil from other excavated materials at the time of construction to ensure the health of replacement landscaping."

Crews also are mindful of the elements during work on the pipeline. 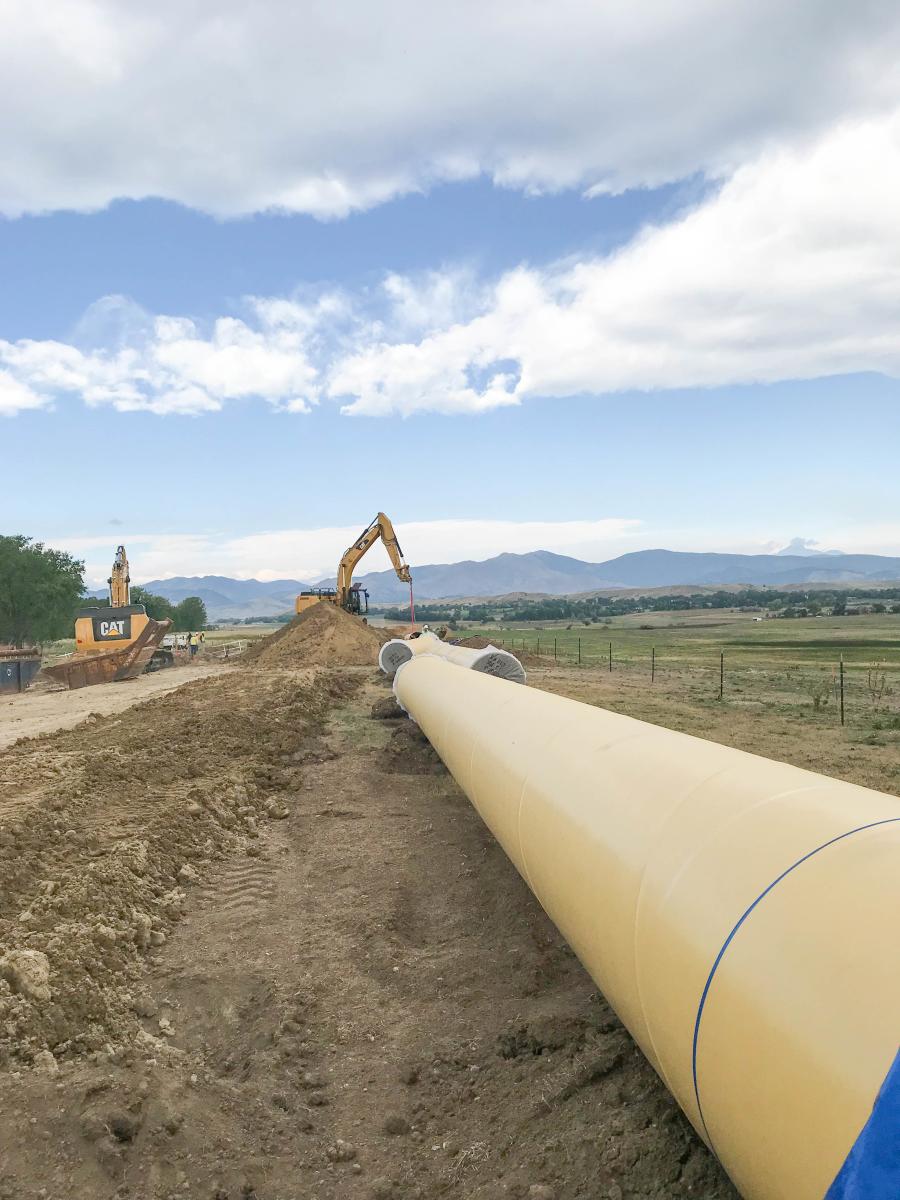 "In Colorado, weather is always a factor. We minimize our activities when soils are wet, but we have taken advantage of the area's sunny winter days to make good progress, too."

Looking ahead, Cecil said a number of tasks remain.

Gary Haas, construction manager of Garney Construction, said about 50,000 cu. yds. of dirt/material will be moved on the project, which includes excavated and additional fill materials. Equipment used on the job includes Cat 390 and 349 sized excavators and John Deere 644 and 624 sized loaders. Main materials used during construction include steel spiral welded pipe that's pressure-rated for 150 to 250 psi for the waterline, and sand for pipe bedding.

Haas said the river and road crossings are the most time-consuming, because of all the technicalities involved.

According to the official website, the SWSP II will traverse from Carter Lake south to the city of Boulder's Boulder Reservoir Water Treatment Plant. The first 12 mi. will parallel the existing SWSP pipeline from Carter Lake to Saint Vrain Road near the Vance Brand Municipal Airport in Longmont. The remaining 8 mi. will head south and west to the Boulder Reservoir Water Treatment Plant.

Northwest Pipe Company, the largest manufacturer of engineered steel pipe water systems in North America, was selected to provide a combined total of 108,400 ft. of pipe for the project.

"We are very pleased to be working with Garney Construction Company to help provide vital water infrastructure to the Northern Colorado Water Conservancy District," company CEO Scott Montross stated in a news release. 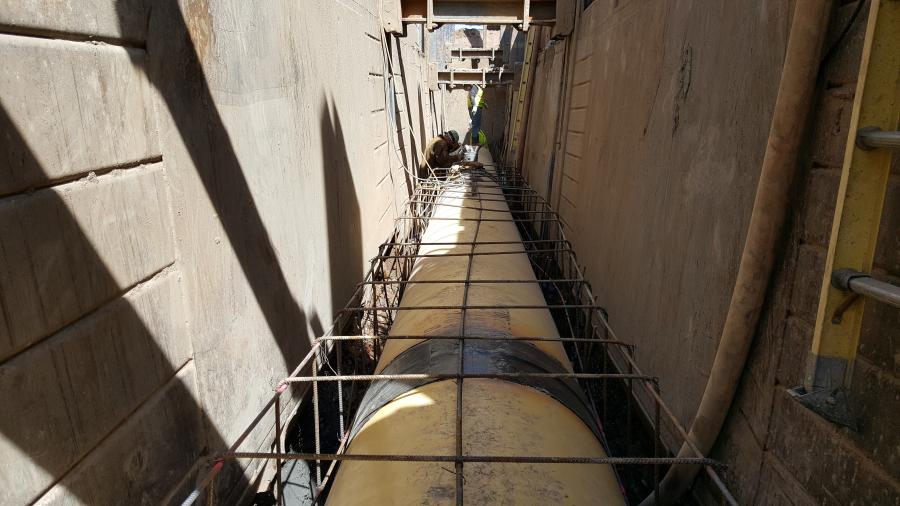 The pipeline will operate at various pressures, typically between 100 to 250 lbs. psi. Engineered steel will be used to construct the pipe itself, which will be designed to withstand any transient pressures and surges that could occur within the line.

The pipeline will go through a number of quality control checks, be hydrostatically tested to a pressure above the operating pressure and be installed to protect other utilities, hazards and property around the pipeline. It will be protected from corrosion through a cathodic protection system that is continuously monitored, and will automatically shut down if a leak is detected.

The stretch of steel pipe will provide improved water quality, increased delivery reliability and, during certain times of the year, will be the primary source of raw water for those served by the project. Work on the pipeline is expected to be substantially completed by February 2020. CEG