Pisa Leans on Contractor to Save Its Tower 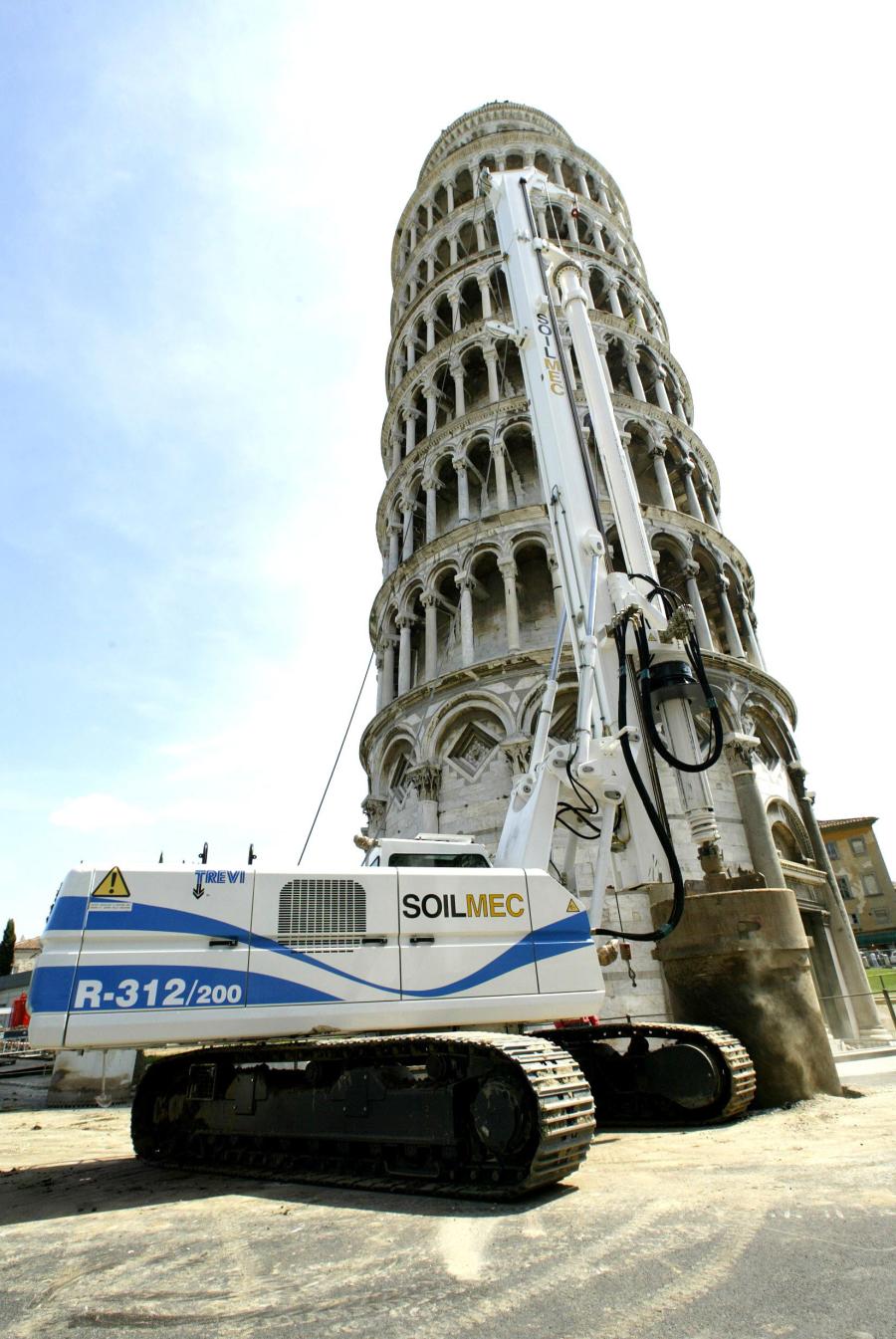 Despite H.G. Wells’ famous novel, no time machine has ever been constructed. However, an ambitious $40 million project has restored the Leaning Tower of Pisa — so close to collapsing its computer model could not be made to stand — back to the less extreme tilt it exhibited in 1838.

The tower was intended to serve as the campanile (bell tower) for Santa Maria Maggiore, the city’s cathedral, and stands next to it on the Campo dei Miracoli (Field of Miracles).

While there is still some debate about the architect responsible, it is generally accepted to be Bonanno Pisano, a Pisa resident.

Construction began in August 1173, but the tower started to lean by the time its third floor was built two years later.

For various reasons it was not until 1372 that the final stage, a bell chamber, was added.

Over the centuries subsidence has caused the building to tilt in a more and more alarming fashion, despite a number of efforts at correcting the problem.

Architect Alessandro Gherardesca excavated a path around the tower in 1838 because its foundation had been buried due to settling. Unfortunately, since the water table was only about 6.6 ft. (2 m) below the surface, this flooded the exposed area, which is thought to have caused the tilt to increase even more.

Another attempt, ordered by Benito Mussolini, involved injecting concrete into the foundation of the tower, but again the effort made the problem worse.

As a result of a tower in Pavia, northern Italy, collapsing with fatal results, a commission was set up in 1989 to examine how best to ensure the safety of visitors to Pisa.

On its recommendation the tower was closed. By then the structure was leaning 14.8 ft. (4.5 m) from vertical, its fabric was compromised, and the masonry had become so fragile it was expected to disintegrate at any moment.

The foundation was temporarily stabilized in 1993 by means of lead weights on its northern side, paired with a removable concrete ring around the tower’s base. Extra weights had to be added two years later when the tilt increased as the result of efforts to replace these weights with ground anchors — a procedure that involved ground freezing.

Freezing is favored for use in the construction of tunnels, wells, and underground structures and therefore was particularly suited for this job.

An international, multi-disciplinary committee was formed in 1990. Chaired by Professor Michele Jamiolkowski of Turin’s Politecnico di Torino, its task was to consider how to stabilize the tower and oversee planning and implementation of the project. The committee’s 14 members included structural and geotechnical stability experts, among them John B. Burland, professor of soil mechanics in the department of civil and environmental engineering at Imperial College, London.

“The reason the tower began to tilt during its construction and continued to do so is due to the nature of the soil beneath its foundation,” Burland said. “The top six meters of soil beneath the foundations are soft silt deposited under estuarine conditions by the River Arno. The next 30 meters of soil are very soft and compressible marine clay. Beneath these is dense sand to great depth.”

Because the foundation was so unstable the commission decided to correct the problem by undertaking a controlled removal of earth on the opposite side to that in which the tower tilts. This procedure was designed to cause the structure to sink on the side opposite the way it leans, thus making it more level.

Physical and numerical models were made and various methods considered and discarded before the commission decided how it would carry out the difficult job.

As Burland noted, “It was an extremely delicate operation as the tower was on the point of falling over and grouting, underpinning, or propping could not be utilized to correct matters. The task was accomplished using soil extraction from beneath the side opposite the lean, carried out very gradually and under strictly observed and controlled conditions. The necessary soil extraction was carried out using a continuous flight auger within a contra-rotating casing.”

Excavation was performed by a consortium of contractors headed by Trevi S.P.A., headquartered in Cesena, Italy.

The Soilmec SM-405/5-8 hydraulic drilling rig used to remove the earth also is designed for use in such operations as tie-back, deep drilling and jet-grouting consolidation. The drill rotates at 2,200 rpm, its mast connected to a swinging boom by a slide, counterslide, and turntable, which provide increased rigidity and stability during operation.

Mounted on a crawler undercarriage, the rig is operated by a Cummins diesel engine. With its jet-grouting extension attached, the overall length of the mast increases to approximately 65.62 ft. (20 m). The configuration of the drill and the auger mounted on it was specifically created for, and was unique to, the Pisa project.

After a cavity was drilled, a probe was inserted to measure how long the hole took to close. Results showed that this occurred slowly, meaning there would be no sudden movement of earth causing further tilting, and also demonstrating that soil could be removed more than once from the same place.

After a successful test at a nearby site on the Field of Miracles, the commission authorized preliminary excavations on the foundation of the tower. Before operations began in December 1998, temporary cables were attached to the structure, terminating in tensioned pulleys mounted on A-frames. This arrangement was intended to aid the tower’s stability if it should become even more precarious during these exploratory drillings.

Once preliminary excavation began the project proceeded at a fairly swift pace, with the first earth removed in February 1999. By the third week of the month, the tower had begun to tilt north, and preliminary soil extraction was continued until June 1999.

Results were satisfactory and the timeline then unfolded as follows:

• November 1999 — Commission granted permission to proceed with the project.

• March 2001 — Removal of augers and casings began and the holes they created were filled with grout.

• June 6, 2001 — Soil extraction ended and the last auger and casing was removed.

One or two problems were experienced during operations. At one point, the tower started leaning to the south as the result of a sudden cold spell. Once temperatures rose, the movement was reversed and the tower began to lean north again.

On another occasion, the structure developed a tendency to tilt east, which was corrected by excavating additional soil from its western side.

Communications between the drilling team and the commission’s engineers were naturally of vital importance. Instructions, data and observations were faxed back and forth between office and site. A caution system based upon the tower’s historical settlement rates also was devised. Inspired by traffic light colors, green indicated the work should go on, yellow represented continue with caution, and red was the signal for immediately ceasing operations.

In all, approximately 33 tons (30 t) of soil were excavated from under the foundation on the north side of the tower. Other work on the project, included restoration of the extensively damaged limestone and marble facade and strengthening the foundation by attaching Gherardesca’s 1838 concrete ring to it.

“We know of three historical examples [of this type of project] but none of them on a tower on the point of falling over,” Burland said. “A church tower in Cheshire in 1832, a church spire in Holland in the 1860s, and a chimney in Germany in the 1860s. However, the inclination of the Pisa tower appears to remain unchanged and the rate of subsidence has been reduced to less than a couple of millimeters per year.”

As a result of this unique project, the tower, which would otherwise have collapsed approximately 25 to 35 years hence, is now further toward the vertical by 17.72 in. (45 cm) a little more than expected according to Burland. It now exhibits a mere 5-degree tilt and was reopened to the public on Dec. 15, 2001. CEG