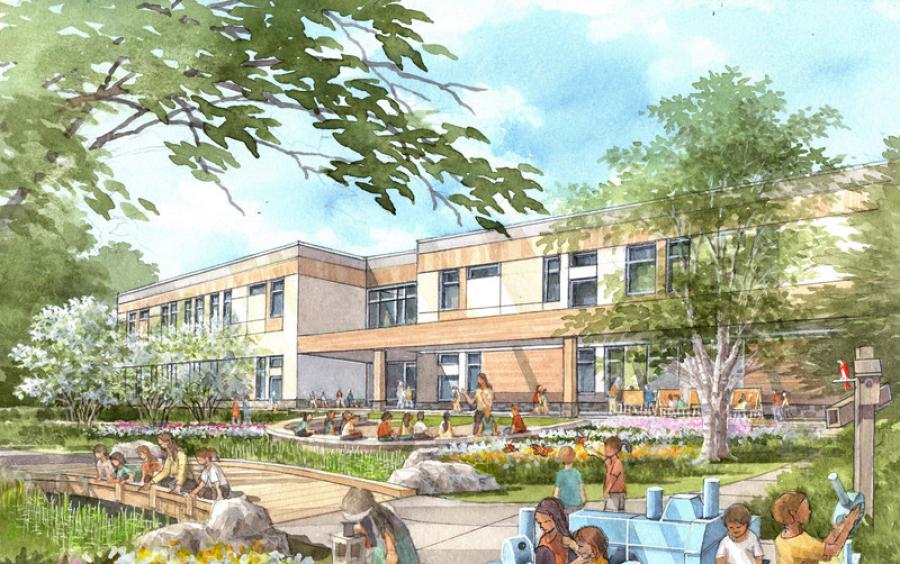 The Select Board in Easton, Mass., unanimously voted March 9 to award a $63.6 million contract to Brait Builders Corp. for the construction of the new Blanche Ames Elementary School after the firm was recommended by the local school planning committee.

The new facility will serve as the regional pre-K through second grade building and be located at the Parkview School site.

"That's just over $10 million in savings on this portion of the work," said Chad Crittenden of PMA Consultants, the project manager. The firm is headquartered in Michigan but has an office in Braintree, Mass.

When it became evident the bids would come in under budget, due to COVID's effect on the market, an alternative add-on also was put out to bid — using terrazzo tile instead of linoleum in some areas of the school. Going with the tile added $148,537 to the cost of the project.

"We knew we were trending under budget and knew we could add something we had talked about," said Dan Colli of Perkins Eastman, the project's designer and architect. "Terrazzo can be a more highly durable project. Linoleum has a life expectancy that is not as long."

Construction should begin this spring, with the new school expected to be ready for occupancy in January 2023.

"We're looking to get shovels in the ground as soon as possible," said PMA Consultants' Walter Hartley.

"This is a huge milestone," added Easton Select Board member Marc Lamb. "Years of work have gone into getting where we are today."

Easton School Superintendent Lisha Cabral also noted the school planning committee will be creating a presentation on the project to update the community. The committee also has held focus groups with staff, students and community members for input into the design, according to Jane Martin, a planning committee member.

"I really feel like this project has done a good job reaching out throughout the community," she said.

Voters approved a debt exclusion of Prop. 2½ to fund $94.8 million for the new early elementary school in 2019. The Massachusetts State Building Authority is covering 55.9 percent of eligible costs, totaling $36 million.

Perkins Eastman's design for the Easton school includes a two-story building with wings of classrooms and a central core housing two cafeterias, a gymnasium, kitchen, music and art rooms and a media center. The second cafeteria is smaller and will be used by the youngest students. Pre-K and kindergarten space is set to be located on the first floor, with the first and second grade classrooms on the second floor.