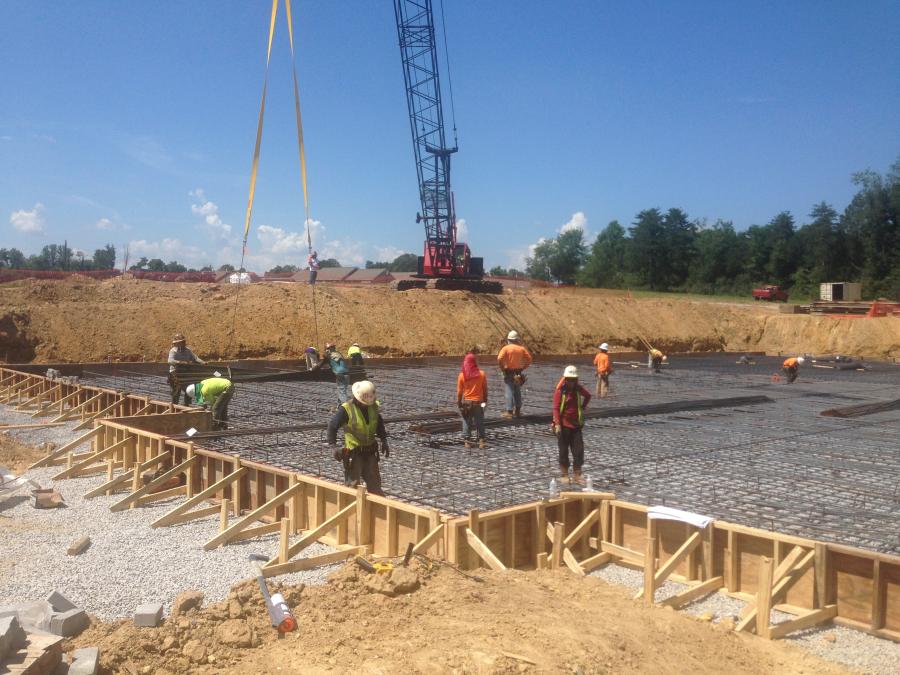 Following a major legal challenge, construction is finally under way on a new wastewater treatment plant that's expected to bring new industry and growth to Madisonville, Tenn. The new plant is located adjacent to the existing plant.

“We have been working toward this project since 2010 and have had several turns to make, due to the action of other agencies,” said Glenn Moser, Madisonville Mayor. “But through it all, we as the mayor and city board keep our focus on doing what is best for the city.”

A number of officials were on hand for the official groundbreaking ceremony. For the city, the project is extremely significant.

“The reason the sewer plant is so important is that people are dependent on the plant working efficiently, and the opportunities for more people to hook on to the system,” said Moser.

Officials have provided updates to residents on a monthly basis, keeping them aware of any developments. The cost of the project is an estimated $7 million.

“We have been on moratorium for a good length of time, so that no new customers were able to tie on to the system. We feel it will open up the market for the possibility of new business, and new tap fees to help pay for the project.”

“It's a major public works project for the city of Madisonville, which will serve its constituents well into future,” said Joel Storrow, who serves as president of McGill Associates.

“Funding for the project was provided by Rural Development, a federal agency under the U.S. Department of Agriculture. The city was approved for $6.941 million through Rural Development's water and waste disposal grant and loan program. The funding split was a $3.590 million low interest loan, 1.625 percent over 40 years, and a $3.351 million grant.”

Storrow said the new plant has actually been in the works for a while.

“The original project was conceived as a regional partnership between the city and the Tellico Reservoir Development Agency (TRDA), an entity comprised of Monroe, Blount and Loudon elected officials. One of the economic initiatives of TRDA was the creation of an industrial park, which needed additional wastewater capacity. The first project was actually the expansion of an existing wastewater treatment plant in the industrial park, which would also accept the city's wastewater.

“Unfortunately, the projected user rates necessary to support the project financially were unreasonably high, and the project was scuttled. At this point, the city purchased 40 acres adjacent to the existing wastewater treatment plant, dedicating a portion of the land as a site for the new plant, now under construction.”

The Tennessee Clean Water Network and the Watershed Association of the Tellico Reservoir came to terms with city of Madisonville officials via a proposed consent decree.

“The lawsuit accelerated the process to secure the new treatment plant site and complete the revised design. The consent decree required the city to construct a wastewater treatment plant to meet stringent phosphorus limits in the new NPDES discharge permit to Bat Creek, and rehabilitate portions of their collection system to reduce inflow/infiltration.”

After years of reported permit violations and pollution of Bat Creek, a federal court ordered the city of Madisonville to build a new wastewater treatment plant to go into operation by June 30, 2017.

The consent decree was signed in June 2015 by U.S. Eastern Tennessee District Court Chief District Judge Tom Varlan. The consent decree acknowledged the violations of the Clean Water Act by the existing Madisonville sewage collection system and its treatment plant, and it requires the city of Madisonville to follow a defined action plan for meeting its obligations under its state discharge permit.

The plan calls for Madisonville to build a new sewage treatment plant to discharge highly treated wastewater to Bat Creek and to eliminate overflows of raw sewage from the headworks of the existing plant.

Tennessee Clean Water Network is a nonprofit organization created to advocate for strong policies and programs that result in more effective protection and restoration of Tennessee's waters and to educate organizations, decision-makers and the public about important water resource issues.

“All of the parties involved in negotiating this settlement recognized that a permanent fix was needed, and sooner rather than later,” said Stephanie Durman, Tennessee Clean Water Network general counsel, in an official statement. “With this resolution, the people of Madisonville and the Tellico Reservoir area will benefit from cleaner water for generations.”

The wastewater treatment plant is designed to treat an average flow of 0.8 MGD, and peak flow of 3.5 MGD. It uses the existing wastewater treatment plant headworks, but replaces the influent pumps. The treatment system provides for biological nutrient removal through an Aero-Mod activated sludge process. The project also includes new chlorine contact basin, post step aeration, a new laboratory and administration building. The existing sludge dewatering system is being relocated to the new site.

“The biggest challenge is completing the project within the scheduled 370 days. In order to build the plant and start up the process equipment within one year, everything must fall into place without delays.”

Current activities include concrete construction of the process basin. Also, the base slab is poured and the walls are 50 percent complete. Structure excavation of the chlorine contact chamber continues, along with mechanical and electrical rough-in of the blower building.

The initial site work and clearing have already been completed, without any major issues or rain delays, according to Whalen.

Some key tasks yet to be carried out include receiving and installing the treatment plant equipment and associated piping systems on time.

“Completing the process basin will be the most time-consuming portion of the work,” said Whalen. “This basin includes most of the treatment process and equipment, ” said Whalen.

The site, once complete, will be approximately two acres.

“Prior to construction, it was partial wooded, but mostly open, gently rolling hills,” said Whalen. “The initial site work, grading and excavation was minor, compared to the scope of the project. Clearing was accomplished within a few days.

“Rough site grading is complete. The finish grading, cutting in roadways and final site work will be completed later in the project. No major demolition is required.”

“We have several pieces of equipment being used on this project, including an excavator, bull dozer, roller, track loader, backhoe and crane,” said Whalen.

“Erosion control measures were installed at the beginning of the project, and will be maintained throughout,” said Whalen. “Water and electrical service are available at the site from the local utility providers. We will start installing the yard piping systems soon.”

Moser said, “To get this plant finished is very rewarding, due to the time we have been working toward completion, and informing the public of the direction and then having to make a change.”

Madisonville was founded in the early 1820s as a county seat for Monroe County. The town was initially known as Tellico, but its name was changed to Madisonville in 1830, in honor of U.S. President James Madison. CEG