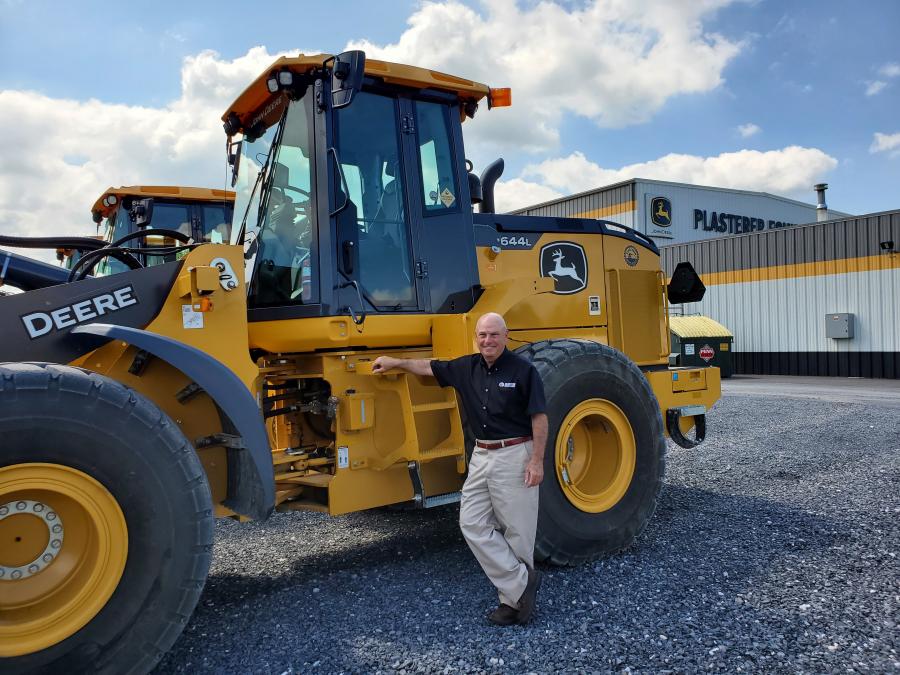 On Sept. 30, 2021, Mike Kernan, who is vice president of sales of Plasterer Equipment, will call it a career after 43 years of helping fill the heavy equipment needs of contractors throughout the mid-Atlantic region.

The mark of a highly successful sales and management professional in the heavy construction equipment industry is not just the number of equipment deals he was involved with in his career, but also the number of customers who want to remain in touch with him after he has retired.

Mike Kernan can count himself among these respected construction industry sales professionals. On Sept. 30, 2021, Kernan, who is currently vice president of sales of Plasterer Equipment, will call it a career after 43 years of helping fill the heavy equipment needs of contractors throughout the mid-Atlantic region.

Early in his life, though, he was involved in a different kind of "iron," before he entered into the heavy iron industry.

"I grew up in Northeast Philadelphia," Kernan said, "I lived very close to Torresdale Frankford Country Club, and as a young kid, starting in grade school and into early high school, I would caddy there."

Some years later, the PGA Pro at Torresdale Frankford C.C. offered him a position there, which he took.

"I really had no desire to be in the golf industry long-term, but what it afforded me for about four years was some great networking opportunities with many solid business professionals who were members of the club, and I took advantage of that," he said. "I worked at Torresdale Frankford C.C. and later at Philmont C.C. But I didn't want to be in the golf industry as a career and an opportunity came up with State Equipment Company.

"I actually networked with a very large Philadelphia contractor when I was offered the position, we met on the putting green at T.F.C.C. and we talked about the industry. He had a lot of insight and shared his views of the construction industry overall, the equipment industry and people he dealt with. The conversation gave me some basic understanding of the business and generated a lot of interest, so I accepted the position and started as a salesman.

"I started in the industry with State Equipment Co. as a field salesman working in the Bucks County territory," he said. "State Equipment was an IH and Bucyrus-Erie dealer at that time. State Equipment offered me my first management position and I became sales manager in 1981. From there, I just progressed up through the industry working for several dealers. Later in my career, I transitioned to a vice president of sales and then, vice president/COO at different dealerships.

"During my 43 years in this business, I spent 40 years in a management position working with some of the very best sales and product support professionals, and without question, these employees were a vital part of my success."

Kernan holds an abiding respect for the Lebanon, Pa.-headquartered John Deere dealer for which he's devoted approximately 20 years of his career to.

"They [Plasterer Equipment] are a fourth-generation family owned business and their business ethics are very much in line with my own," he said. "The customers we have are long-term, repeat customers that we value and establish lasting business relationships with. Some of the customers I deal with are third-generation businesses.

During his time at State Equipment, Kernan was very involved with AED (Associated Equipment Distributors) and one of its local chapters, the Delaware Valley AED (DVAED) for which he served as president. He was also Lt. Director AED, for the local region, which included the Commonwealth of Pennsylvania.

"I stayed involved in the equipment industry as a whole, including working as an associate member on several committees with contractor organizations just to stay involved," he said. "As far as the equipment end of it, I worked on the Dealer Advisory Boards with three manufacturers and also donated time to several dealer/manufacturer committees. It was very important for me to donate my time and give back to the industry with whatever experience I could offer. You can help the manufacturers understand the business from a dealer's perspective. That is what I tried to give them."

"We were really fortunate to have Mike join the Plasterer team when he did in January 2002," said Tim Houser, president of Plasterer Equipment Company. "His impact was immediate. Mike brought with him a wealth of experience in application knowledge, financing and experience in selling large iron and putting packages together."

And the timing couldn't have been better for Plasterer, added Houser.

"His relationships with many of the largest contractors in south central and southeastern Pennsylvania opened the door for Plasterer and John Deere. Mike was always a great sounding board, he knew many people in the industry, including customers, competitors and industry executives and his counsel was always informed and spot on. He never said no to anything, including many early morning meetings requiring him to wake up at 4 a.m."

It didn't take long for Plasterer to realize Kernan's ability and within a few years he was promoted to vice president of sales.

"Mike's value system and Plasterer's value system are identical," Houser said. "Anytime you can have an executive on your team with integrity, experience and communication skills to build relationships with customers and fellow employees you would be a fool not to promote them and frankly, listen and learn from them. Mike will be missed at Plasterer when he retires. He has been a true professional and has helped me plan for this moment. As a result, I think we have sound group of managers coming up within the company that can fill Mike's role and help the company move forward. It is safe to say everyone in the industry wishes Mike well as he opens this new chapter."

But when the deal closes on his retirement later this month, it will be the relationships Kernan formed and fostered throughout his long career that will continue as he settles into a new phase of his life. Contractors from throughout the Delaware Valley and Central Pennsylvania were quick to commend Kernan on his equipment expertise and to laud his business ethics.

"He was trustworthy," said John Gleim, CEO of John W. Gleim Jr. Inc. Excavating. "I can honestly say that he becomes part of your company when he's working with you. He never talks about another customer. That's important because ‘loose lips sink ships.' He's become part of my team. We went through some troubled times over the years I've worked with him and he was there for me when I needed help, advice for equipment. Even in those bad times I was able to keep on functioning. I just can't say enough about the man. He's done everything he's ever said he was going to do. He's going to be missed. The industry is going to lose somebody that really takes care of our industry. We have a lot of history together and I hope to see him after he retires. We've become friends."

Keith Brubacher, president, Brubacher Excavating, said he has been honored and privileged to work with Kernan during his time with Plasterer Equipment.

"His flexibility and creativity have been instrumental in increasing the number of John Deere equipment in our fleet," said Brubacher. "We're a nice-sized contractor, but we're certainly not the biggest and the one thing that has always stood out to me is Mike always made you feel like you were the most important client. He had a great way of being attentive to your needs even when you weren't the biggest client.

"We worked through some difficult things; with equipment, things don't always go perfectly no matter whose decal is on the side of the machine, and Mike has always been fair in resolving issues that arose. I wish Mike and his wife, Nancy, all the best in this new phase of his life and I hope that we still get to see him around because he's a great friend that we'll really miss seeing as regularly as we've been."

Pat Hawbaker, vice president of construction operations of Glenn O. Hawbaker, enjoyed working with Kernan because of his vast knowledge and experience of equipment.

"Mike was very prompt," he said. "If Mike said he would get you something by Thursday, you'd get it by Tuesday or Wednesday. He was very customer-oriented and would get you the answers to the questions you had. He was well skilled on the equipment functions, features, operating costs, etc. He would work tirelessly to find a solution to a problem, whether it was a maintenance type issue or a performance issue. Mike would interface with the OEM and try to find some solution, if it needed to get elevated to that level. I'm sure we'll maintain contact. Mike is a smart, motivated, good person and you want to be around guys like Mike."

"He's a great man and he's a friend of mine," he said. "He's very honest. Whatever he said, you could take it to the bank. Whenever there was a problem and whenever I called Mike, he would always pick up the phone. He would say, ‘Joe, let me get into it,' and the problem would get resolved. We're going to set up a golf date sometime in October because I want to stay in touch with him."

"Honesty, integrity and problem solving … that's Mike," he said. "He's a bottom-line guy who get to the heart of a problem, gets it resolved and we move forward. That's sort of a lost trait these days. I'll definitely see him after his retirement … we've got some plans."

As far as plans go for Kernan once Sept. 30 arrives, he said he doesn't have any "grand plans."

"For me, it's family first," he said. "I'll definitely spend more time with my family. I have three grandsons and I'm very much looking forward to spending more time with them. I still play golf and do some bowhunting, so I'll probably do a little bit more of both.

"I worked in the industry to provide for my family," he continued. "I like the competitiveness. I like where you are selling high-dollar capital equipment that actually is utilized by contractors to produce something, and the various ways you get into that between the different finance scenarios. I think the best relationships we have with a lot of our customers is when we know their business and it's very much of a consultative type selling arrangement.

"I'll miss a lot of things. I'll miss the people. I'll miss the challenge. It's a very challenging industry. It's very competitive. I've always been somewhat of a workaholic, where I like to start early and I finish late. That fills a lot of time in the day. Actually, throttling back and just doing things other than work will certainly be an adjustment in the beginning." CEG