Construction continues on a $23 million hotel planned for the popular Five Points South district in Birmingham, Ala. 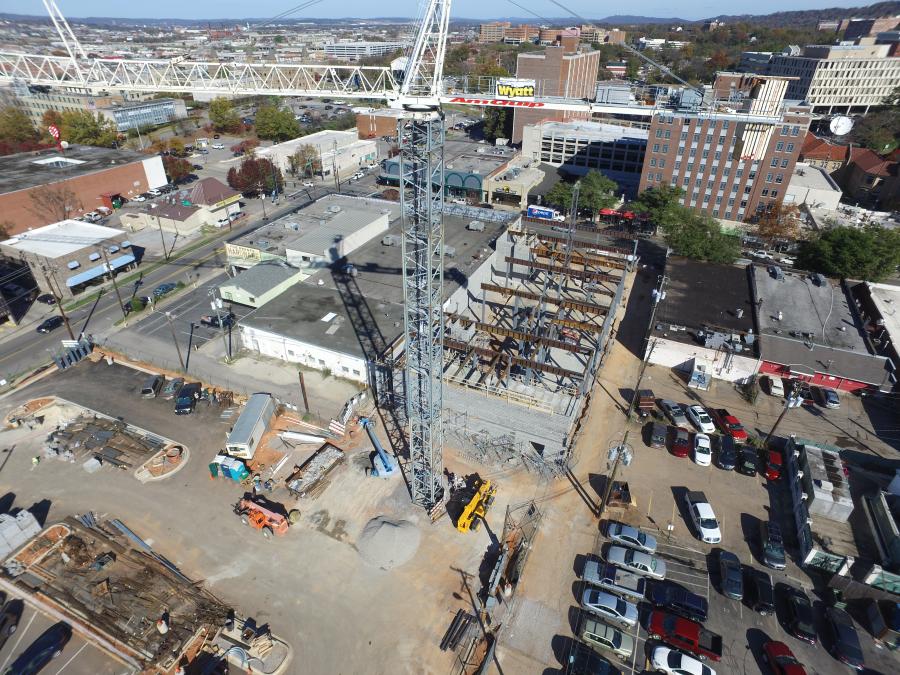 Construction continues on a $23 million hotel planned for the popular Five Points South district in Birmingham, Ala. Situated on heavily traveled 20th Street South, Homewood Suites by Hilton in Five Points South is expected to open this fall.

“It will be the first extended-stay product for the downtown area for Hilton hotels in Birmingham,” said Rakesh Patel, president of Pelham, Alabama-based AUM Enterprises Inc. “We are getting great reviews from the city and community. It has added the needed push to get other things started in this area of Birmingham. The hotel will serve not only UAB guests, but also banking, insurance and health care industries.”

“Five Points has a mix of customer base, with a neighbor and commercial appeal. With all the trend toward 'downtowns' across the nation, we feel this was the best time to build.”

The project was given the go ahead by a design review committee several years ago, but various issues reportedly delayed construction. Specifically, a number of adjustments to the original plans had to be made before work could commence.

“It's like putting a large puzzle together,” said Patel. “We started with an off-the-wall idea of putting a hotel in the area back in 2009, came back to it in 2011 and then watched it top out in the spring of this year.”

The seven-story hotel will feature 105 rooms, each with a full kitchen.

It will also offer an indoor pool, 24-hour fitness center, meeting rooms, a two-story lobby and an outdoor grill and patio. Work began in July 2015 and should be completed this October.

According to Nick Miele, vice-president of operations of Birmingham-based Wyatt General Contractor LLC, “The project is in a tight space in an urban environment. Tight coordination with certain deliveries had to be same-day installation, as there was no room on site for storage. This is very important, therefore your schedule must be tight and maintained.

“As the project is a brand name hotel, the owner went over and beyond on the design and style to blend with the art deco feel within this area of town. It wasn't your standard hotel. This was a true custom designed hotel to fit a tight space and a certain feel.”

Currently, crews are installing the EIFS and windows around the perimeter of the hotel. Key tasks yet to be carried out involve coordination of all detailed finishes that will be included in the building. This includes tile, mill work, wall covering and decorative elements.

“It is fully topped out, and the roofing is complete,” said Miele. “We are installing drywall on the fourth floor of the building. The structure is complete, consisting of steel, load bearing CMU and hollow core concrete planks. All went according to plan.”

Miele said that the indoor pool has to be excavated and built before the building walls are enclosed for access purposes.

“You typically don't want to do this too soon without a roof, or some type of cover, so it won't stay saturated.”

The urban environment also has been a concern for crews, who must constantly be aware of shoppers and moving vehicles.

“You have to worry about the safety of your work force, in addition to the surrounding pedestrians. It's just another level of management that has to be maintained,” said Miele.

The project didn't call for a great deal of excavation, as the site was primarily flat.

“The hotel sits on a spot where a building used to be,” Miele said. “An existing building had to be demolished first, which was sandwiched against 'Bailey Brothers Music Company' and an existing alley. We had to be careful not to damage the adjacent building. Total demo and clean up took about two weeks. We used a trackhoe and dump trucks.

As for the most time consuming part of the work, “Since the building is unique and custom, the owner is constantly changing things. Having to juggle this change is challenging; however, good open communication has been key to this project,” said Miele.

“We are honored and extremely excited to be a part of this project in a very popular area of Birmingham.”

Richard Rauh & Associates of Atlanta was selected as architect for the new hotel.

Richard Rauh, AIA, said, “We've served as architects on hotels for Hilton Hotels Worldwide for over 30 years. In the case of this project, the proximity to the medical and hospital community indicated a need for a suite type hospitality solution, in order to host families and visitors coming to receive those services. The Homewood Suites is a perfect Hilton solution to that demand.”

Being environmentally conscious was important to the creative team, according to Rauh.

“All upper-tier hotels in 2016 that fly the flag of the industry's leading brand names are designed to meet contemporary standards for energy efficiency, sustainability and long-term durability of the built environment. This is true from a civil engineering standpoint, as well as an architectural, mechanical and electrical one. The efficiencies of the HVAC systems in hotels are significantly higher now than they were 20 years ago, for example.”

Rauh said the new hotel includes an art deco facade that will blend with other buildings in the area.

“The owner's site is located in the historic Five Points South historic district of Birmingham, which also is the location of the University of Alabama Birmingham medical center. This is an area of the city where new hospitality services are in demand. The vision of the project is to be responsive to the hospitality needs of the district, and also to sustain the historic character of Five Points South, which contains many of Birmingham's most interesting examples of 1930s art deco buildings.

“The site the owner was able to purchase for his development was originally built on during the Depression, with a Piggly Wiggly food store. The food store had a handsome one-story cut limestone facade with considerable art deco ornament. The city of Birmingham and the owner agreed his multi-story hotel development would be designed on the assumption it would incorporate the exact street level character of the original art deco shop front. The new hotel will have a re-created shopfront that's a precise replica of the original Piggly Wiggly limestone facade. The material we're using is Indiana limestone, and the deco detail has been meticulously reproduced using modern digital technology, both in design and fabrication, said Rauh.

Rauh said art deco detailing and art motifs have been used throughout the public areas of the structure, both inside and on the exterior.

“The motifs are academically accurate and consistent with the details one can find in art history books on French and European art deco of the 1920s throughout the USA, especially in larger cities. The modest late 1938 to 39 deco one finds in Miami Beach, which came when building resumed after the worst of the Great Depression had passed, is quite different from the extravagant art deco of the Roaring 1920s. The greatest art deco hotel of them all, of course, is the Hilton Netherland Plaza Hotel in Cincinnati, designed in 1928, which is a national landmark. We restored that hotel 20 years ago, and much of our knowledge about European art deco comes from the 10 years we spent working on that magnificent building.

“The details we've been able to add to this Birmingham project blend well with the touch of art deco detailing one finds, here and there, throughout the Five Points South historic district. The city of Birmingham has been very wise to recognize the cultural resources that it has in Five Points South, especially the art deco ones, and in working administratively to protect and preserve them.”