Port of Boston Preparing to Handle Larger Ships by Fall 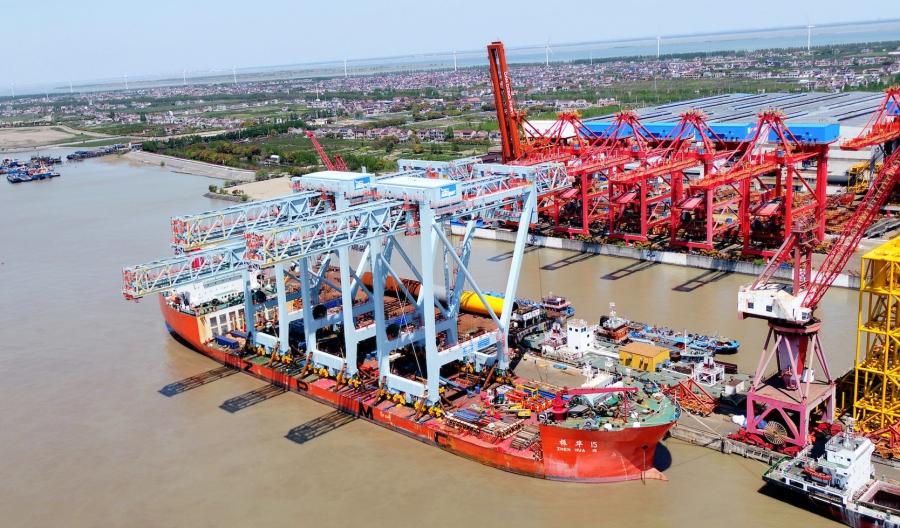 The Port of Boston is aiming to better serve New England's economy by modernizing the facility to handle larger commercial ships — an $850 million effort that should be operational this fall.

The port's Conley Container Terminal will feature new deep-water berths and tall low-profile cranes to load/offload big container ships moving in and out of Boston Harbor. Hopes are high that the upgraded port will facilitate better trade between New England and other worldwide markets.

The Massachusetts Port Authority (Massport) has worked to improve and expand Conley Terminal, a years-long effort that will celebrate a major milestone this summer when a trio of new low profile Neo-Panamax cranes arrive in Boston on a ship from Shanghai, China, the American Journal of Transportation (AJOT) reported on April 14.

Massport, with funding support from the Commonwealth of Massachusetts, bought the ship-to-shore cranes. They are now on a journey from China to Boston that will take approximately two months.

Along with a new berth and a deepened Boston Harbor, the huge cranes will enable the port to become a more productive avenue for regional importers and exporters to connect with the global marketplace, as well as spur future growth at Conley Terminal, the only full-service facility of its kind in New England, according to AJOT.

Larger cranes have become essential tools for seaports if they are to stay competitive with other facilities worldwide. Their need is due to the shipping industry's shift toward using larger vessels that hold more containers as well as the 2016 expansion of the Panama Canal to accommodate them.

"This significant milestone would not have been possible without the support of our local, state, and federal partners," noted Massport CEO Lisa Wieland in a statement. "The Port being big ship ready comes at a critical time as the region's economy recovers from the impacts of the pandemic. Massport's investment in the future of Conley Terminal shows our commitment to support the New England importers and exporters that rely on the Port, as well as the thousands of workers across the Port."

AJOT reported that the Conley Terminal's new Berth 10 is 1,250 ft. long and dredged to 50 ft. so the new cranes will be able to better service larger container ships. Currently, Conley is designed for 5,000 TEU ships and, under certain conditions, can load/offload vessels up to 10,000 TEUs.

Other modernizations to Conley Terminal have recently been finished or are in progress, including the creation of new rubber-tire gantries, expanded container storage and other landside improvements.

Among the latter was the $75 million Butler Freight Corridor, a dedicated truck roadway that provides a more efficient route for trucks to get to and from Interstates 90/93 and takes trucks off residential streets.

The deepening of Boston Harbor itself also is under way and is scheduled to be completed in 2022. The $350 million enterprise is a collaboration between the U.S. Army Corps of Engineers (USACE), the Commonwealth and Massport. To accommodate larger ships, the Outer Harbor Channel was dredged from 40 to 51 ft.; the Main Shipping Channel, from 40 to 47 ft.; and the Reserve Channel, where the Conley Container Terminal is found, from 40 to 47 ft., AJOT reported.

Additionally, the USACE expanded the Harbor's Turning Basin to 1,725 ft., a depth that will allow Conley to handle more efficiently 12,000 to 14,000 TEU vessels.

Massport noted that despite the pandemic and its effect on the economy, the Port of Boston has been able to remain a reliable supply chain partner and Conley Terminal remains virtually congestion-free while still offering personalized customer service, according to AJOT. Conley currently has an average truck turnaround time of only 30 minutes.

A diverse mix of commodities are shipped through the port, including furniture, recycled fibers, seafood, wine and spirits, apparel, footwear and auto parts.

Two weekly services currently use the facility. The Mediterranean Shipping Company (MSC) provides direct service from Northern Europe to Boston, with connections to Latin America, the Mediterranean and Southeast Asia. A second service, the OCEAN Alliance, made up of COSCO Shipping, Hong Kong-based OOCL, Evergreen, and CMA-CGM in Dubai, provides direct service from North Asia.

The expensive investment made in the Port of Boston's improvement received significant support from the Massachusetts Congressional Delegation, the Baker-Polito Administration and the Massachusetts Legislature.