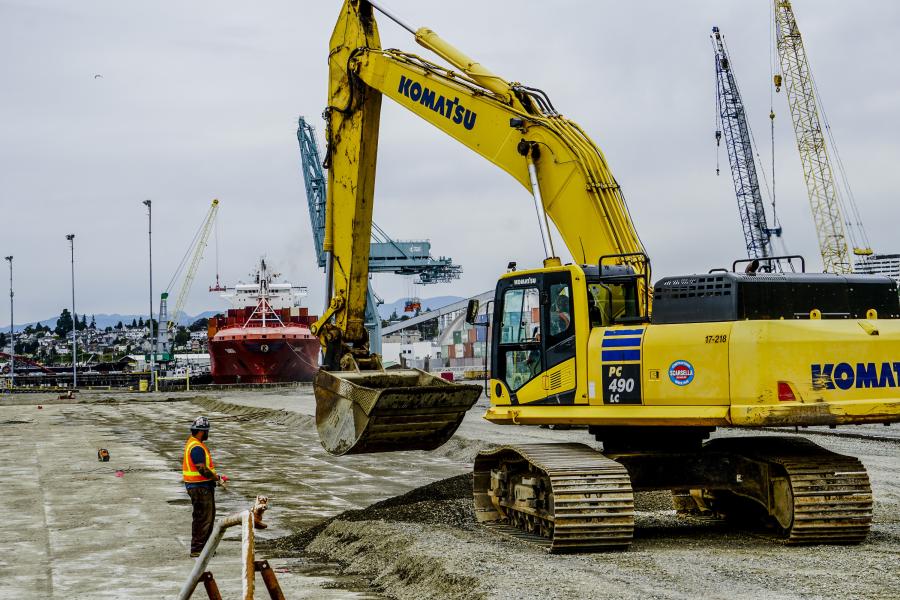 The Seaport Modernization project comes as the Port celebrates its centennial and prepares for the next generation of aerospace cargo and ships, investing in infrastructure and making substantial improvements to public access and marina infrastructure.

The folks at the Port of Everett, Wash., like to say it's "small but mighty" and nowhere is the truth to that statement more obvious than in the recently unveiled $90 million Seaport Modernization plan. The first component of the project involves the upgrading of a 700-ft. wharf built in the 1970s by lumber giant Weyerhaeuser.

"This is the largest project by value that the port has done," said Steve Hager, Port of Everett construction project manager. "As we understand it, it is currently the largest marine project on the West Coast."

The Seaport Modernization project comes as the Port celebrates its centennial and prepares for the next generation of aerospace cargo and ships, investing in infrastructure and making substantial improvements to public access and marina infrastructure.

"The Port began planning and seeking state and federal funding for this project to support the new class of airplane parts for the 777X that are much bigger and heavier than the current 777 airplane parts," said Lisa Lefeber, acting CEO/executive director. 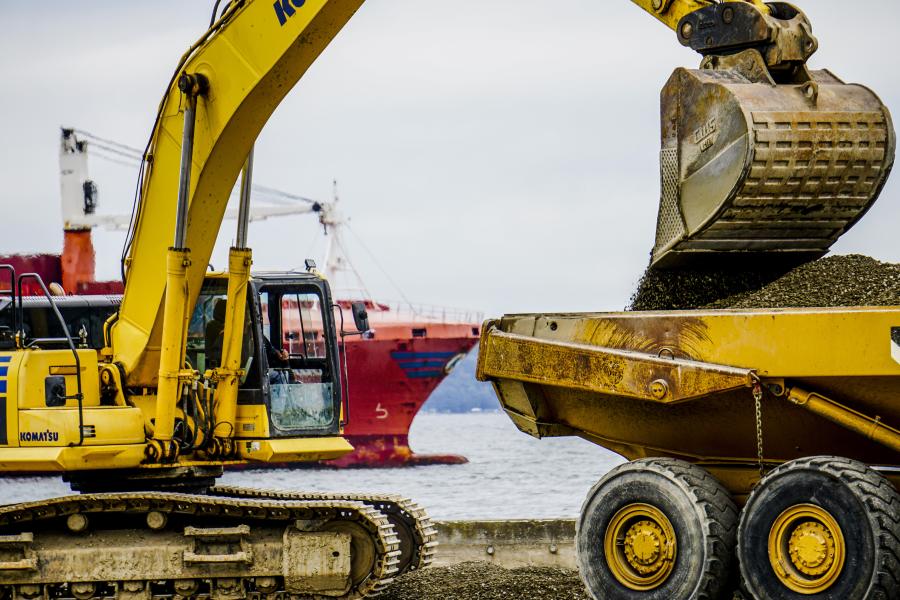 "The Port of Everett has grown over the years to establish a niche as the premiere breakbulk port in the region, specializing on high-value, over dimensional cargoes that don't fit into a standard container."

Port operations support the fifth largest export value district on the United States' West Coast and the second largest in Washington state at $30 billion in exports, Lefeber said. "Our operations, primarily from the seaport, but with the largest growth in our real estate division, supports more than 35,000 jobs in our region."

Work on the wharf, used by Weyerhaeuser along with an existing shed to offload pulp projects involves upgrading it to 500 lbs. per sq. ft. to a 1,000 lbs. per sq. ft. loading. Workers with Advanced American Construction, headquartered in Portland, Ore., also are installing crane rails and beams for two 100-ft. Gantry cranes.

"Right now, we have two 50-foot Gantry cranes, but with the larger containers we need to go to the 100-foot for the loading," Hager said. "As far as the work we're doing to get to the higher loadings of 1,000 pounds per square foot, we need to install more pilings. We've demoed the wharf by stripping everything off to the deck. We cut holes in the deck. We're currently in the process of installing 343 new piles. With that comes new pile caps."

Crews also are repairing the existing pile caps in cases where there are cracks in the concrete and exposed rebar. 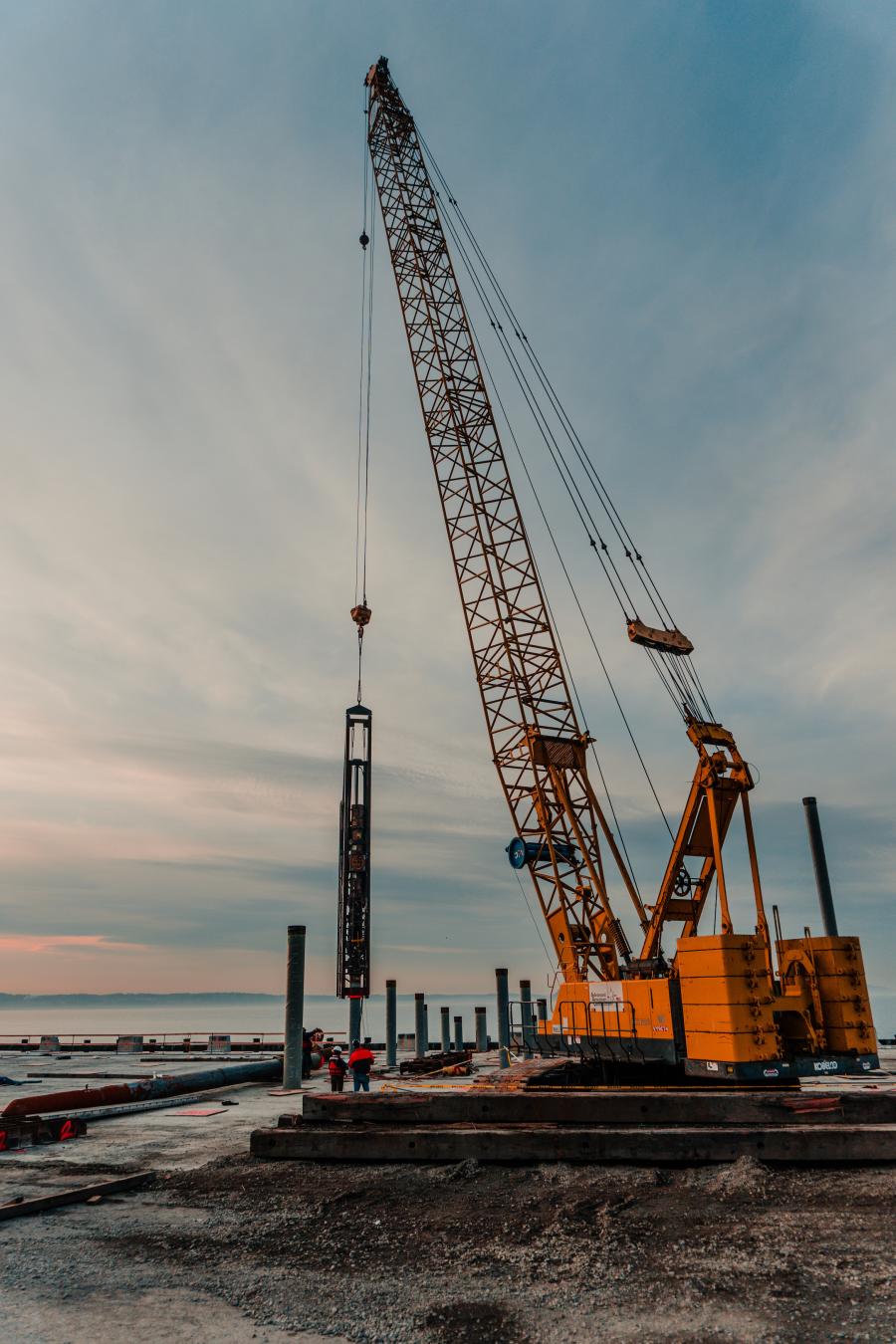 The work is taking place underneath the wharf on scaffolding and involves the use of jackhammers to remove the concrete, replacing the existing rebar and grouting the existing pile caps.

"That in itself is quite an effort along with driving piles on top of the wharf," Hager said. "We're also bringing in new 12 KV primary power to operate the cranes and future shore power."

The $30 million wharf project also included moving a 36,600-sq.-ft. cargo shed, a job that went to Emmert International of Oregon.

"We decided that rather than demoing it, we moved it off the wharf and put it adjacent to our rail," Hager said. "Essentially, it's just a large shed — a table with 36 independent columns. We picked it up and relocated it. We've just finalized that building here in the last month. We're using it now for off-loading dry goods and soybean products from rail cars."

The contract will run through December 2019, with the wharf scheduled to be operational January 2020.

"When the South Terminal project is complete, it is expected to add an additional 2,000 direct and indirect jobs to our region," Lefeber said.

"In addition to jobs and the environment, the Port is committed to appropriate public access. The Port and the city have been investing heavily in a balanced waterfront over the years.