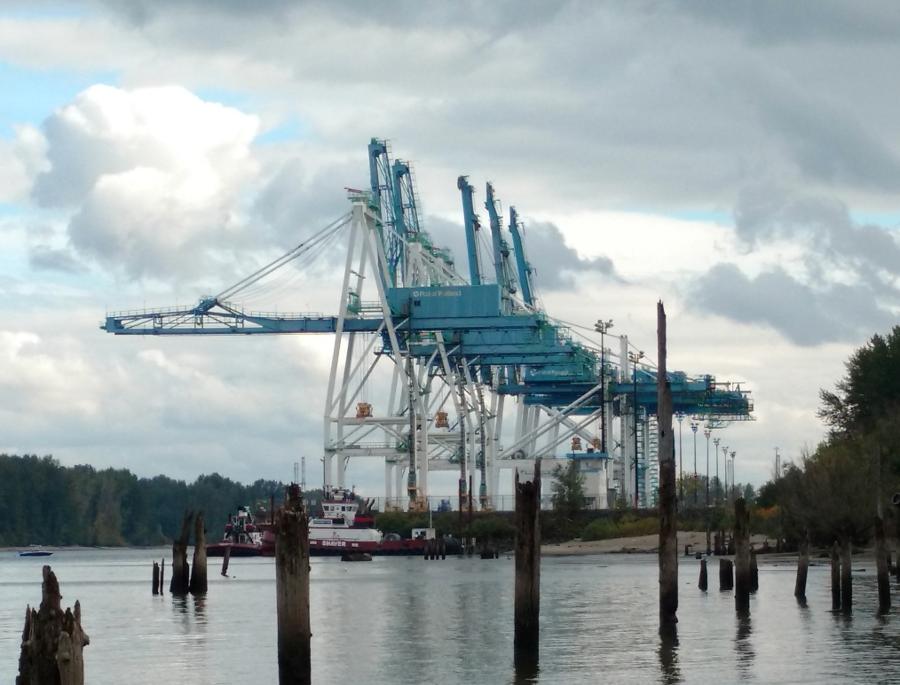 By Elliot Njus and Luke Hammill

As the Port's executive director from 1991 to 2001, Thorne made hurried trips to Asia to maintain relationships with shipping companies. He lunched with Oregon importers to rustle up business for the carriers, giving ships a reason to stop in Portland. The Port built up other lines of business to prop up the container terminal's losses.

All that was OK, Thorne said. Leaders at the Port, a public agency funded in part by taxpayers, saw the container terminal's export business as a service to farmers and other export-dependent businesses across the Northwest — one important enough to justify the cost.

“We have to export,” he said. “The containers were a critical service.”

By 2010, that philosophy had changed. The port's new director, Bill Wyatt, still saw the container terminal as an important part of the port's mission, but he also saw it as a major financial liability. The port, hoping to dodge the risk while continuing to provide the service, turned to a private operator.

That decision laid the groundwork for what's become a long-running story in Oregon: the labor standoff that has idled the terminal, leaving the state's farmers scrambling for other ways to get their goods to the world market.

Much has changed in the international shipping world. Cargo ships have gotten bigger, and shipping industry consolidation has reduced the number of players in the market. That's made it tough for a small port like Portland to succeed in the container business.

The future of the state's only deepwater container terminal remains murky as legal issues continue to play out in court. And a well-known Republican is trying to convince legislators a state agency should take over the terminal to get container service running again.

The standardized container was revolutionizing shipping in the 1970s as the Port of Portland started construction on its container terminal. Containerized shipping allowed more efficient transfer of cargo from truck to train to ship, and it dramatically sped up the rate of global trade.

The Port spent $17 million in airport funds to build the 66-acre Terminal 6, which opened in 1974. In part because of the high cost of equipment, the terminal turned a profit only twice under the Port's management. It nonetheless grew to 192 acres, with three ship berths and nine enormous gantry cranes, one of which was subsidized by $7.5 million in state lottery money.

The terminal, 102 mi. (164 km) upriver from the ocean, never seriously competed with major West Coast container ports. In 2008, Portland accounted for just 1.3 percent of container movement along the coast, according to the Pacific Maritime Association.

Nonetheless, its idling has cost Oregon exporters about $15 million a year in the cost of trucking goods to other ports, according to a 2016 study. It's been especially costly for producers of products with small profit margins, such as compressed hay shipped to feed dairy or livestock animals overseas.

“Terminal 6, in its heyday, was fantastic,” said Shelly Boshart Davis, vice president of international sales and marketing at Bossco Trading, an exporter of straw, alfalfa and hay based in Linn County.

Oregon's agrarian economy depends heavily on exporting goods, but its smaller population means it's not a natural destination for imported goods.

That's a problem for a container terminal, a place where success depends on a tenuous balance of imports and exports.

“In container shipping, a perfect balance would be one container coming inbound, one container going outbound,” said Robert Hrdlicka, who served as the Port's marine director from 1990 to 2003. “Shipping companies do not make money moving air.”

So Thorne and Hrdlicka would travel the state meeting with importers large and small, trying to establish more inbound freight to balance out the exports.

They also met frequently with exporters, of which there were hundreds. And they made frequent trips to Asia to talk with carriers, trying to maintain the frequency of service and perhaps lure more.

In between, they had to keep up labor relations with the International Longshore and Warehouse Union, which was known for bargaining hard and being fiercely protective of its interests.

For both Hrdlicka and Thorne, the container terminal easily consumed the majority of their working hours.

Port officials pursued a shipping company that would offer “first port of call” service, meaning a ship from Asia would come directly to Portland, then head directly back, maximizing the amount of space dedicated to moving Oregon goods. The goal always seemed just over the horizon, Thorne said.

They also considered offloading the work of running the container terminal to a private operator.

“I can be sympathetic with wanting to lease the terminal,” Thorne said, remembering that the hard and long work required by the container business didn't always yield great results. But they had a condition: The operator would have to bring new business, including “first port of call” service, to Oregon.

“We even talked about it,” Thorne added. “We'd never do it unless the operator would bring more business to Portland.”

By 2007, though, the Port was again seriously considering privatizing the container terminal. Thorne was gone. Wyatt, who today remains the Port's executive director, had taken over.

The publicly operated terminal was an outlier at a time when most major container terminals on the West Coast were operated by private businesses. The Port's 2007 strategic plan makes clear that Wyatt and other administrators were tired of the ups and downs of the container business.

“The volatility of the container business line is a major strategic issue for the Port,” the report reads.

In 2004, two major carriers had stopped service, taking with them more than 50 percent of the Port's container volume. Business eventually rebounded, but the sudden shock necessitated the layoff of 30 percent of the port's administrative staff.

The port also saw the end of what had been a stabilizing stream of funding — the sale of industrial land at the Rivergate Industrial District — and the looming cost of the Portland Harbor Superfund site cleanup, currently estimated at $746 million.

“We were on a one-way road where the costs were going to kill us,” Wyatt said.

But one of the companies that expressed interest during the earlier search — Philippine firm International Container Terminal Services Inc., or ICTSI — quietly came back to the negotiating table, and in 2010 the two sides came to a deal: a 25-year lease of Terminal 6 under which the company would pay the Port $4.5 million annually after an initial rent payment of $8 million.

The longshore union, which did not respond to numerous interview requests, testified in favor of the deal. ICTSI, which hadn't previously operated any American ports, did not bring any new shipping business of its own but promised it would double container volume within five years.

The task of keeping the terminal financially viable was now the company's problem, not the Port's. ICTSI, which took over terminal operations in 2011, declined comment for this story.

Things went as planned for about a year, until the longshore union claimed jurisdiction over jobs plugging and unplugging refrigerated containers that had traditionally belonged to union electricians who worked for the Port.

The dispute led to court battles, slowdowns at the terminal and the expiration of the longshore union's West Coast contract with the Pacific Maritime Association. The result was that all three container shipping lines that called at the Port left town.

Terminal 6 remains idle, and tension between the union, ICTSI and the Port persists to this day.

But even now, Wyatt describes ICTSI's arrival as a timely lifeline for the Port's container business.

“Not only would we have gone out of business, but it would have been ugly,” Wyatt said. As it stands, he said, “we still have a container terminal that could operate under the right conditions.”

David Doeringsfeld, who has managed the Port of Lewiston in Idaho for 23 years, said his port and the Port of Portland are “connected at the hip.” Transportation costs have doubled for some farmers, who now have to get their product to Tacoma or Seattle, he said.

“Absolutely there's a need for container service again at the Port of Portland,” Doeringsfeld said.

The Port of Portland did help set up a barge-to-rail system whereby containers can unload at the Port of Morrow in Boardman and be shipped by rail to Puget Sound. Doeringsfeld's counterpart in Boardman, Gary Neal, praised the Port's efforts in that regard.

But the lack of container service in Portland has made things harder in Eastern Oregon, too.

“We have quite a bit of trucking that had gone to Portland to get on the steamship line,” Neal said. “And that's the most reliable and cost-effective place to ship for export, if we can use the services at the Port of Portland. And we have many industries in this region that export overseas, all over the world.”

Neal suggested the blame for the loss of service lies with the union: “I think it'll come back when we have productive workers who want to work,” he said.

Thorne said he believes it comes down to working with the union. The longshore union has always been difficult to work with, he said, but it's ultimately the only option for a workforce at the terminal.

“Picking a fight with them isn't going to do you any good,” he said. “That plays almost to their benefit.”

He added: “It's not the first time there's been these kind of disputes.”

The Port has accomplished wonderful things in other areas, Mannix said, but as far as the container business, “the solution was not to walk away.”

“The solution was to become more engaged and to make that terminal work,” he said.

Backed by a coalition of exporters, importers and transportation companies, Mannix is pushing state legislation that would create a public corporation called the Oregon Shipping Authority to assume control of the container terminal.

He has piqued the interest of Republicans at the statehouse, including Sen. Brian Boquist of Dallas, who said in an email such an idea “may be good” in the short-term. Over the long term, he prefers developing the Port of Coos Bay, a goal shared by Mannix and his would-be shipping authority.

Mannix also said state Sen. Bill Hansell of Athena would sponsor the legislation, but Hansell backed away from it in a phone interview.

“The likelihood of success is pretty small, and you'd likely do more damage than good,” Hansell said.

The Oregon Shipping Authority, Mannix has said, could consider renegotiating the Port's contract with ICTSI. Mannix also has floated the idea of using public workers at the docks rather than the longshore union, and the idea that the state could even create its own shipping line.

Wyatt insists such an idea would never work. Any shipping company that called at a terminal staffed with non-union dock workers would surely be boycotted along the rest of the coast.

Unwinding the ICTSI deal would likely cost millions, between buying out the company's lease and replacing equipment the company owns and uses to operate the port.

And the state would be stuck with the costs of maintaining and operating the port, the situation Wyatt tried to avoid through privatizing its operations.

Regardless, Mannix said, somebody needs to try something.

“The present situation is unacceptable,” he said. “You can't do any worse than zero.”

Duane Olson, sales and warehouse manager at Northwest Onion Co. northeast of Salem, agrees. He's not sure who to blame, but he just wants container service back in Portland. He thinks perhaps Port officials “didn't look at the long-term of how important” Terminal 6 is to Oregon exporters.

“You'd try to write a congressman, or a senator, and everybody kind of said they couldn't get involved. Hopefully they can get somebody back in there soon,” Olson said. “We'd love to see it.”