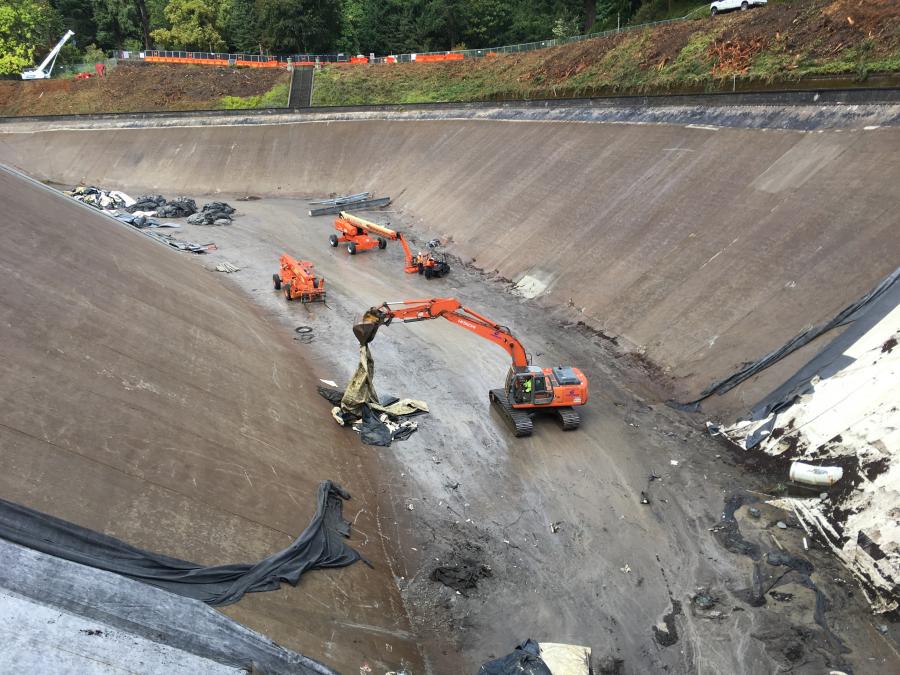 In Oregon, an eight-year capital improvement project to update the Washington Park reservoir site is moving forward. The Portland Water Bureau is overseeing efforts to preserve the historic drinking water function and protect the area from the potentially catastrophic effects of a natural disaster.

“The work is needed to replace aging infrastructure, seismic concerns and regulatory requirements,” said Stan VandeBergh, principal engineer, Portland Water Bureau. “The new 12.4 million gallon, seismically reinforced buried reservoir has been designed to withstand a major earthquake. When complete and online, the new reservoir will supply water to Portland's west side, and serve more than 360,000 people, including all downtown businesses and residents, 20 schools, five hospital complexes, more than 60 parks and the Oregon Zoo.”

“The Washington Park reservoirs are now more than 120 years old. Condition assessments performed at the reservoir site in 1997 and 2001 confirmed the reservoirs and structures were nearing the end of their useful service life. Portland has a schedule to replace its open finished drinking water reservoirs with enclosed storage by December 31, 2020.”

The reservoirs are an essential part of the water system serving areas west of the Willamette River in the city. The pumping facilities on the site ensure water can reach high elevations in the west hills.

“As a public health agency, it's our responsibility to create and maintain a healthy, reliable, resilient water system for generations to come. This facility is a critical lifeline infrastructure, and must be operational during and following a major seismic event. It is a key piece of the Water Bureau's backbone system and the Oregon Resilience Plan.

“The existing reservoirs were built long before the current building code and do not meet any seismic codes. Portland has both a Cascadia Subduction Zone risk of a magnitude 9.0 earthquake and several local faults capable of causing a magnitude 6.0 or greater earthquake. The reservoir sits at the base of an ancient landslide. Any construction next to the slide needs to be designed and constructed with the landslide in mind.”

The 2006 federal regulation requires the city of Portland to protect its stored drinking water against contamination as part of the water quality requirements for safe drinking water. To address this requirement, the city is constructing alternative buried storage, allowing the uncovered reservoirs to be taken off-line.

Access to the construction site is a concern, because of its location in a public park nested in a residential neighborhood with limited access.

“In September, one of the first oversized deliveries of construction equipment was delivered to the site. This equipment delivery consisted of soldier pile drill equipment and a mobile crane brought to the site by a 130-foot oversized truck and trailer. The local neighborhood and park visitors can expect similar traffic disruptions throughout the life of the construction project. Project staff is working hard to manage these impacts by effective traffic management planning and timing of deliveries.”

VandeBergh said, overall, there has been positive support for the process and design for the visible features of the project. The public continues to be informed through monthly updates to stakeholders, website updates, media advisories and periodic briefings to business and neighborhood associations. For organizers, watching the project unfold is extremely rewarding.

“The Portland Water Bureau is proud of its role as a regional leader in building and maintaining seismically sound infrastructure. Constructing this new reservoir is a once-in-a-lifetime project that will provide safe drinking water to the next generations of Portlanders.”

The project is reportedly expected to cost about $190 million. Construction began in May 2016, and will proceed through 2020. A pause in construction is scheduled from 2020 to 2022 to allow soil to settle. From 2022 to 2024, construction of interpretive features, including the two reflecting pools and surface features, will complete the project.

“This is a large, complicated construction project,” said VandeBergh. “There is an active, ancient landslide in the park, exacerbated by original reservoir construction and logging of the area in the 1800s. The new buried reservoir will be located just outside of the landslide limits. Excavations will be staged such that impacts to the landslide will be limited. This will be accomplished by limiting excavations to 50 feet laterally, requiring backfill prior to continuing the excavation.”

During construction, activities that may impact the landslide will be monitored using various methods and instruments including slope inclinometers, survey points and an optical survey monitoring system that provides near real time monitoring.

“Construction will largely be within the historic district on city of Portland property,” said VandeBergh. “An extensive design process has considered how to accommodate or restore historic elements, and how to incorporate new elements in deference to the historic district. This process considered feedback from the community and guidance from historic preservation groups including the State Historic Preservation Office, Portland Historic Landmarks Commission and the Historic Resource Committee of the local American Institute of Architects chapter.”

According to VandeBergh, more than 200 trees will come down during construction.

“The Portland Water Bureau worked with horticulture experts to create the tree mitigation plan and partnered with the city forester and Portland Parks and Recreation to ensure only trees that are invasive or impact the reservoir construction project are removed. To be in compliance with the city's new tree policy, we will be planting 693 new trees on site and have paid City Urban Forestry $257,400 so that they may plant additional trees within the city. The city removed trees from May 2016 through October 2016. The trees and vegetation were removed using conventional equipment including chain saws, trackhoes, trucks and wood chippers. Nearly half the native trees removed will be used in river habitat restorations projects and for exhibits at the Oregon Zoo.

The most time-consuming part of this project is the construction of the new buried concrete reinforced reservoir.

“This will take approximately three years. The duration is due to site access limitations, the necessity for the two shoring walls, the drilled shafts and limitation imposed on excavations due to the existing landslide. Since the construction of the reservoir is located near the toe of the landslide, the geotechnical engineer is limiting the widths of excavation to 50 lateral feet. Excavation must be backfilled prior to additional excavation.”

For the first phase of construction, the typical work day will be between 7 a.m. and 3:30 p.m., Monday through Friday. However, unrestricted work may stretch into the early evening hours. At times, crews may be needed on Saturdays for critical concrete pours, with some nighttime and Sunday scheduling. At the peak of construction, there will be approximately 100 crew members on site.

During the two-year pause in construction, onsite personnel will be limited to a few workers, if erosion control requires maintenance.

The final phase, which includes constructing the visible features, will require between 30 and 40 workers at peak times.

Because of the complexity and varying elements of the project, there will be a variety of construction equipment used, including backhoes, trackhoes, on and off-road dump trucks, two tower cranes, mobile cranes, a Klemm drill rig for tie-back anchors and a Bauer rotary drilling rig for drilled shafts, grout plant and concrete pumps.

Erosion control measures will be monitored daily throughout the life of the project. A total of three agencies permit and monitor efforts. When there is a conflict between requirements, the construction contract requires the most stringent requirement to apply.

Work on Reservoir 3 includes construction of the shoring walls and excavation for the new buried reservoir and transfer of soil to the Reservoir 4 basin. Once the excavation is made, the drilled shafts will be installed along with the Mechanically Stabilized Earth (MSE) wall to the west of the new reservoir. This will be followed by construction of the reinforced concrete reservoir.

The project site and geology is not typical of a reservoir site. The new buried reservoir will be founded on drilled shafts that are socketed into bedrock. The back fill that will surround the reservoir will be in excess of 50 ft. in depth and will be placed on more than 70 ft. of compressible soils that are anticipated to settle approximately 12 in.

Looking ahead, construction of interpretive features, including two reflecting pools, will require a great deal of planning. Although the construction of the visible features will be similar to construction of typical park features and plazas, the challenge will be to preserve historic features while complementing them with new ones. This will include flatwork, landscape plantings, historic concrete restoration, preserving and restoring the gatehouses, mechanical systems for the reflecting pools (including recirculation and filtering) and lighting.

Disconnecting Reservoir 4 from the public drinking water system will occur concurrently with construction of the new buried reservoir and is scheduled to be completed by Dec. 31, 2020. Disconnecting the reservoir consists of physically cutting the inlet and outlet piping that connects to the active water system.

The existing Reservoir 4 is an open, uncovered finished drinking water reservoir and is required to be either covered or treated at the outlet by federal law. The elevation of Reservoir 4 is no longer needed in the water system. Reservoir 4 is not being replaced with covered storage. Some of the reduced storage needs is the result of increased conservation and loss of industry in the northwest area which was served from Washington Park. The Water Bureau has determined that the loss of emergency storage in Washington Park can be compensated for with storage on the east side and improved transmission, which includes a planned new crossing under the Willamette River.

According to Bob Ward, vice president of West Yost Associates, “The biggest design challenge was designing a reservoir at the toe of a landslide that will be functional during and after a Cascadia earthquake, while meeting the historical and park requirements that are inherent when replacing a 100-year-old facility.”

Many of the concepts from LEED and Envision were incorporated into the project to enhance sustainability. Sustainability is a cornerstone value for Portland Water Bureau and the design team. It was considered for design, construction and operation of the facility. A specific example is the effort made to reuse materials on site, which eliminated a considerable amount of trucking.

Said Ward, “This is a rewarding project to be part of, because of the technical challenges of the design, the opportunity to add public features to an Olmsted inspired park and the team of Portland Water Bureau, Hoffman Construction and the designers who are working together to make the project a success.”

As for taking on a project that will last for years with so many different parts, “The planning and coordination required to meet the regulatory deadline of covering the reservoir by 2020, working on the historical features and providing the reflecting pool as a public amenity by 2024 make the project fun. The duration and the many aspects of the project make it interesting and challenging, not more difficult.”—CEG