Other preliminary work includes acquiring properties and removal of structures on those properties, if necessary. Crews are also relocating utilities as necessary. 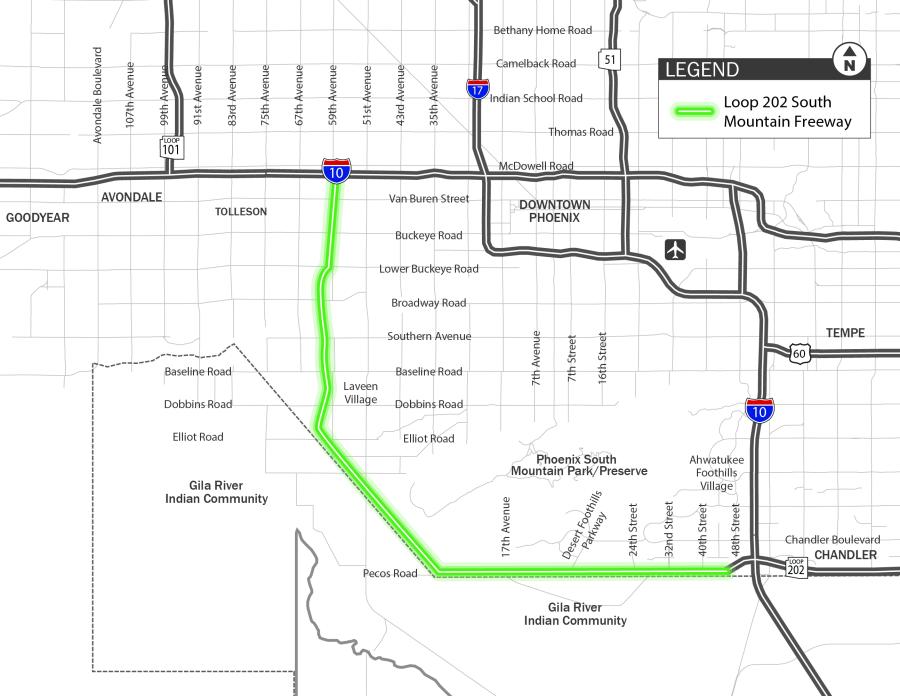 ADOT photo. The South Mountain Freeway, which will run east and west along Pecos Road and then north and south near 59th Avenue, connecting with Interstate 10 on each end, is expected to open by late 2019.

Loop 202 South Mountain Freeway near Phoenix, Ariz., is the hub for plenty of pre-construction activity along the planned route. ADOT crews are checking soil, rock and underground water conditions, while archaeologists are gathering items and information on the past for future study.

Other preliminary work includes acquiring properties and removal of structures on those properties, if necessary. Crews are also relocating utilities as necessary.

Using drills and backhoes, ADOT crews are working to assess the condition of soil and rock as well as the depth of groundwater along the freeway alignment.

The work, which is scheduled to continue for several months, will help engineers plan the freeway's pavement, bridges, walls and drainage structures.

Understanding the soil, including its type, density, moisture content and strength, is essential prior to building any roadway. For the 45 bridges that will be built for the South Mountain Freeway, the answers will help engineers determine how deep concrete foundations should be. Finding clay rather than hard rock in an area could require engineers to use thicker pavement, build a support base or replace the soil altogether.

Workers will drill holes, called borings, and dig test pits up to 10 ft. (3 m) deep along the roadway alignment, and at all future bridge and retaining wall locations. Materials collected will be analyzed to create a profile of what lies beneath much of the 22-mi. (35 km) corridor.

This initial work will occur only during the day, and it won't affect traffic. There may be traffic impacts later along Pecos Road, and ADOT will send out traffic advisories in advance of that work.

Crews have already begun marking locations for testing after receiving environmental clearance and working with Arizona 811 to ensure there are no conflicts beneath the surface, such as water, gas and electrical utility lines.

None of the current work will occur within South Mountain Park.

Along the 22-mi. corridor where the South Mountain Freeway will be built over the next few years, archaeologists are working to gather and recover items and information from the past that may have cultural or historic significance.

At one point along the freeway footprint, archaeologists are systematically digging 5-ft. (1.5 m)-deep trenches looking for signs that ancient people lived or farmed there. At other sites, archaeologists have found pottery pieces and 19th-century shotgun shells, among other items, and also documented historic petroglyphs.

The Arizona Department of Transportation is completing this and other work at 16 various sites that have been identified as potentially having cultural or historic significance during the 13-year study phase of the South Mountain Freeway. As a result of these extensive studies, ADOT published an environmental impact statement allowing decision-makers to better understand the potential positive and negative impacts of the project on the environment.

Whether they contain evidence of those who inhabited this area in prehistoric times, artifacts from farms important to the area's heritage or even an abandoned railroad, these sites must be managed according to federal and state historic preservation laws before freeway construction begins this summer.

"Protecting and preserving cultural resources is the law, but it's also the right and respectful thing to do," said Linda Davis, who leads ADOT's historic preservation team.

By law, some of this work must remain confidential while it is happening, and sometimes a site will be fenced and monitored by security for safety reasons and to protect what ADOT's research and field surveys suggest may be found there.

Federal and state regulations require ADOT and the Federal Highway Administration to identify and address any potential environmental impacts that could affect cultural or historic resources, air and water quality, wildlife, noise levels, hazardous waste and more before proceeding with any construction project.

This makes the agency one of the largest sponsors of archaeological research in Arizona. As part of its environmental planning process, the agency considers the effects of transportation projects on sensitive cultural resources by consulting with Native American communities, conducting research and limiting impacts from highway construction as much as possible.

Work at prehistoric and historic sites may include thorough documentation or excavation and extraction, analysis and preservation of artifacts, which can include sending the identified artifacts to an accredited repository, such as the Arizona State Museum, Museum of Northern Arizona, Pueblo Grande Museum or Huhugam Heritage Center. Historic structures also are documented.

"Building any transportation facility has consequences, including cultural and environmental impacts that ADOT is committed to minimizing as much as possible," said John Halikowski, ADOT director. "In fulfilling its environmental commitments, including how it handles cultural resources, ADOT has to strike a balance between the need for a modern transportation network and protecting Arizona's cultural heritage."

The South Mountain Freeway, which will run east and west along Pecos Road and then north and south near 59th Avenue, connecting with Interstate 10 on each end, is expected to open by late 2019. The freeway will provide a long-planned direct link between the East Valley and West Valley and a much-needed alternative to Interstate 10 through downtown Phoenix.