Preliminary Work Under Way on $1.5B Foothill Gold Line 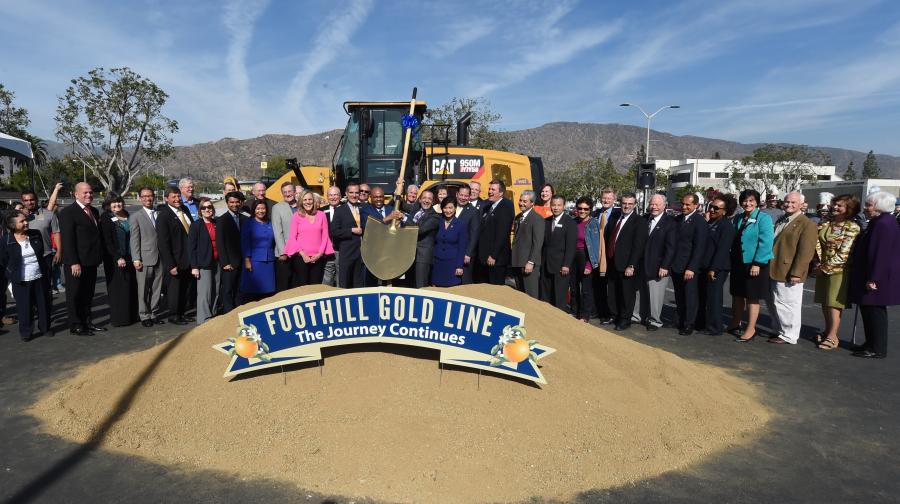 Crews constructed the first segment from Union Station to Pasadena in 2003 and the Pasadena to Azusa segment in 2015 — both on time and under budget.

And now comes segment three, a complex nine-year project that will extend service to Montclair in southwestern San Bernardino Valley. The project is expected to improve mobility in the area by reducing freeway traffic, improving public transportation and encouraging construction of transit-oriented communities near the rail lines. 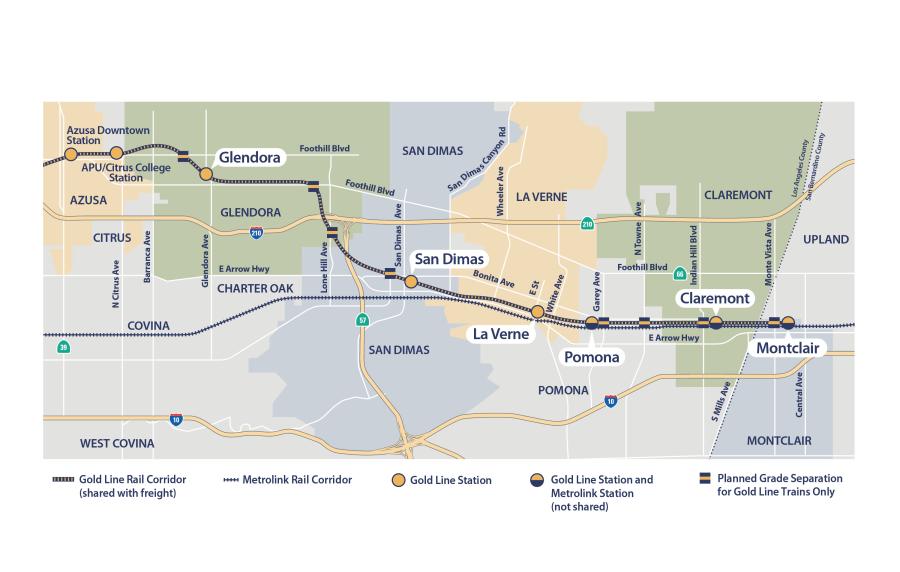 “Funding the second phase of the Gold Line extension is the perfect example of what we're trying to achieve through our agency's comprehensive transportation plan,” said Metro CEO Phillip A. Washington in a release. “As we make transit more available in new communities, we are changing the face of Southern California and creating an infrastructure inheritance for our children and grandchildren.”

Substantial completion is anticipated in 2026.

In addition to laying tracks and installing the overhead electric systems, crews will build parking facilities at all six stations including spaces for electric vehicles, bicycle parking and bus and drop off areas. They will construct 26 new street-level rail crossings and either install or renovate 25 bridges.

Each light rail car will have a capacity of 200 passengers. Trains will consist of two or three cars. Maximum speed is 55 mph.

Building the system is complex, requiring extensive planning and coordination.

“The Construction Authority's team has been working tirelessly over the last few years to ready the Glendora to Montclair segment for construction,” said Habib F. Balian, Foothill Gold Line CEO in a release.

The hiring process for the project's Alignment Design-Build Contract is under way but will take about a year to complete. It is considered the main contract for the project.

The $750 million Alignment Design-Build Contract is now under procurement. It features a multi-step, competitive process.

When completed, the Glendora to Montclair project will extend the Metro Gold Line light rail line from its eastern terminus in Azusa through the foothill communities in the San Gabriel Valley and into San Bernardino County, adding new light rail stations in Glendora, San Dimas, La Verne, Pomona, Claremont and Montclair. Each will connect to the expanding rail network in Los Angeles County, as well as the Inland Empire, and provide opportunities for county residents, workers and visitors to connect to many regional and local points of interest along the corridor, including two dozen colleges, the Los Angeles County Fairplex, several outdoor recreation facilities, historical sites and museums, and retail and dining centers.

The Glendora to Montclair segment will be built along the former Atchison, Topeka and Santa Fe (ATSF) right-of-way and will share the 100-ft.-wide (on average) rail corridor with freight throughout and Metrolink from Pomona east to Montclair. While the different rail services will share the corridor, they will not share tracks or stations.

The Foothill Gold Line will run on its own two tracks (one for eastbound and one for westbound trains) with overhead electric lines called catenary wires, to power the trains. BNSF and Metrolink both operate diesel-powered locomotives. They will continue to run on their own dedicated tracks, to be relocated within the shared corridor as part of the project.

Funding for the project comes from both Los Angeles and San Bernardino Counties. The portion of the project within Los Angeles County (Glendora to Claremont) is being mostly funded by Metro's Measure M half-cent sales tax, as well as residual Measure R funds from the Pasadena to Azusa segment.

The portion of the extension from Claremont to Montclair is being funded by San Bernardino County.

The project is expected to bolster the area economy. Construction alone is expected to generate $2.6 billion in economic output, 17,000 jobs, more than $1 billion in labor income and nearly $40 million in tax revenues for Los Angeles County. Nearly $2 billion in private investments in transit-oriented developments have already been made or planned within a half-mile of the six future stations from Glendora to Montclair.

The first three years of the project will see construction in several locations along the corridor and minor community impacts. Once major construction begins in 2020, the community can expect temporary construction impacts, including extended street closures at street crossings, short-term lane closures.

The community also can expect noise, mostly from construction vehicles during limited construction hours. Community notifications will be provided ahead of construction impacts starting.

Additionally, changes will take place in each city along the route:

Glendora: In Glendora, new light rail bridges will be built over the intersection of Foothill Boulevard and Grand Avenue, at Lone Hill Avenue and at Route 66 where the existing freight bridge also will be relocated and rebuilt as part of the project.

While moving east through Glendora, the rail line will run parallel to Route 66 and the I-210 freeway for a time, then shift south, crossing over the freeway, before heading east toward San Dimas.