Preventing Floods in an NYC Neighborhood 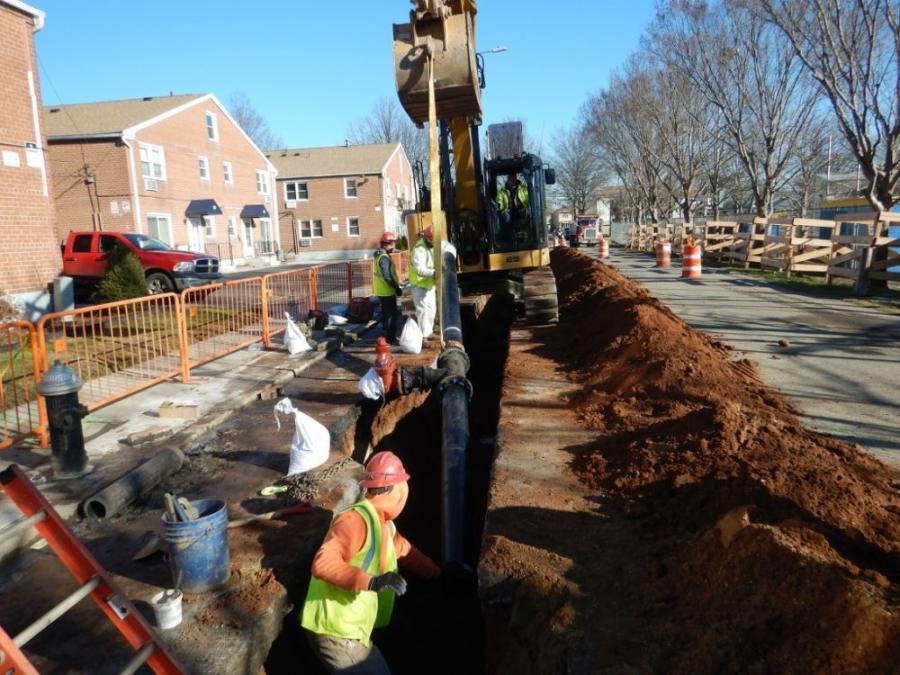 Work has begun on the $39 million Phase II of the New Creek Bluebelt on Staten Island, N.Y.

The project is for the New York City Department of Environmental Protection (DEP) and is being done by the New York City Department of Design and Construction (DDC). It is located in the Dongan Hills and Grant City neighborhoods, where roadways are often prone to flooding during heavy rainstorms. It includes two Bluebelt wetlands, which will eventually grow to 19 wetlands. They will be designed to receive and naturally filter the stormwater that falls in the area.

The prime contractor for the project is DiFazio Industries, with Charles Santoro serving as the superintendent. 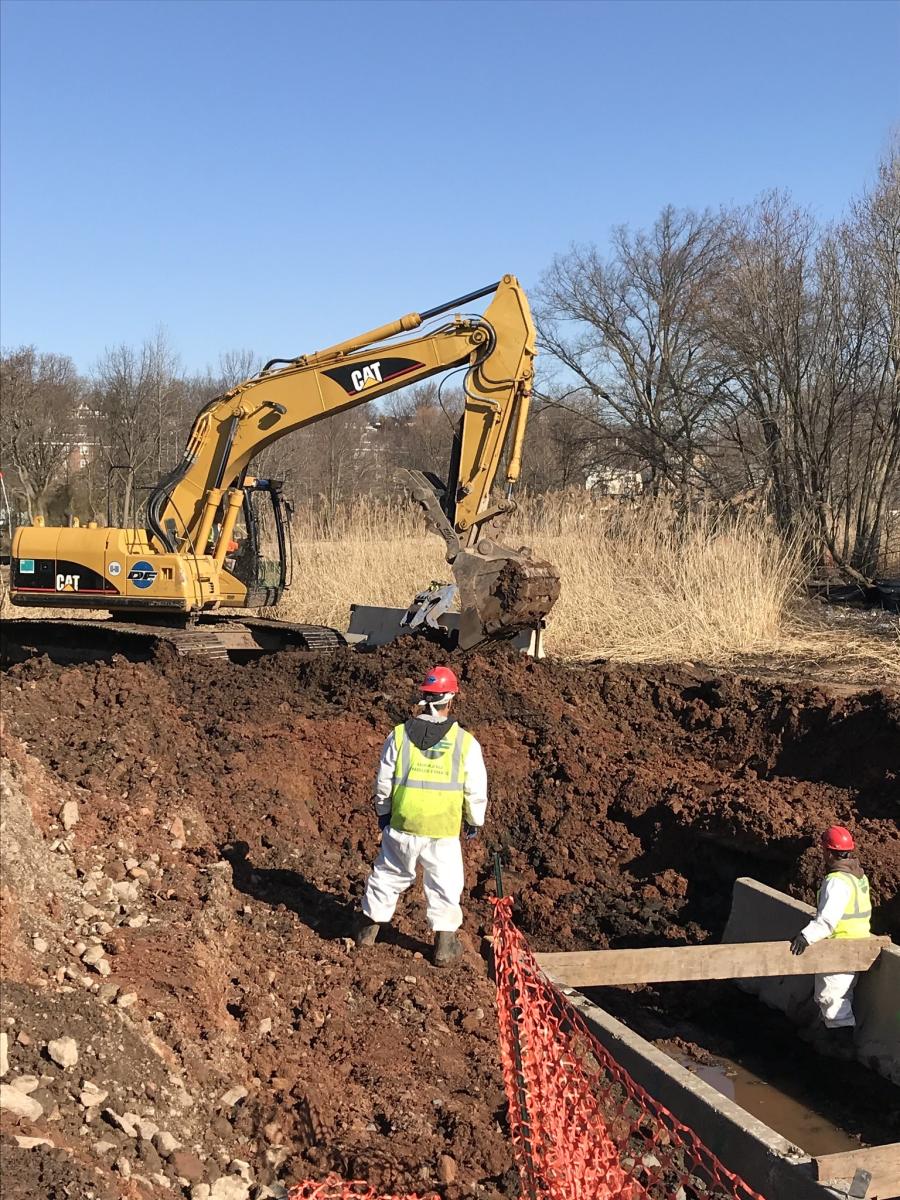 The project is being jointly funded by DEP and an $11 million U.S. Department of Agriculture grant, which was secured by Sen. Charles Schumer. DDC is managing the construction, which is anticipated to be completed in 2021. The $25 million Phase I was completed in 2018.

Shoshana Khan, assistant public information officer of the DDC, said the work also will include the construction of more than 3 mi. of new sewers and nearly 2 mi. of water mains. There will be more than 80 catch basins and 35 fire hydrants.

According to Khan, approximately 40,000 cu. yds. will be excavated in the Best Management Practices (BMP). In addition, approximately 55,000 sq. yds. of roads will be restored. Four BMP headwall structures and one BMP weir chamber will be constructed.

"The Mid-Island Bluebelt is not only a beautiful addition to the neighborhood, it is a critical piece of infrastructure that will improve roadway drainage and reduce flooding, raise nearby property values, protect the health of New York Harbor and allow for construction of the East Shore seawall," said DEP Commissioner Vincent Sapienza. "We thank our partners at DDC for professionally managing these important projects and the elected officials for their advocacy on behalf on their constituents."

Khan reported that the award-winning Bluebelt program preserves natural drainage corridors such as streams and ponds and optimizes them to help control and filter stormwater. 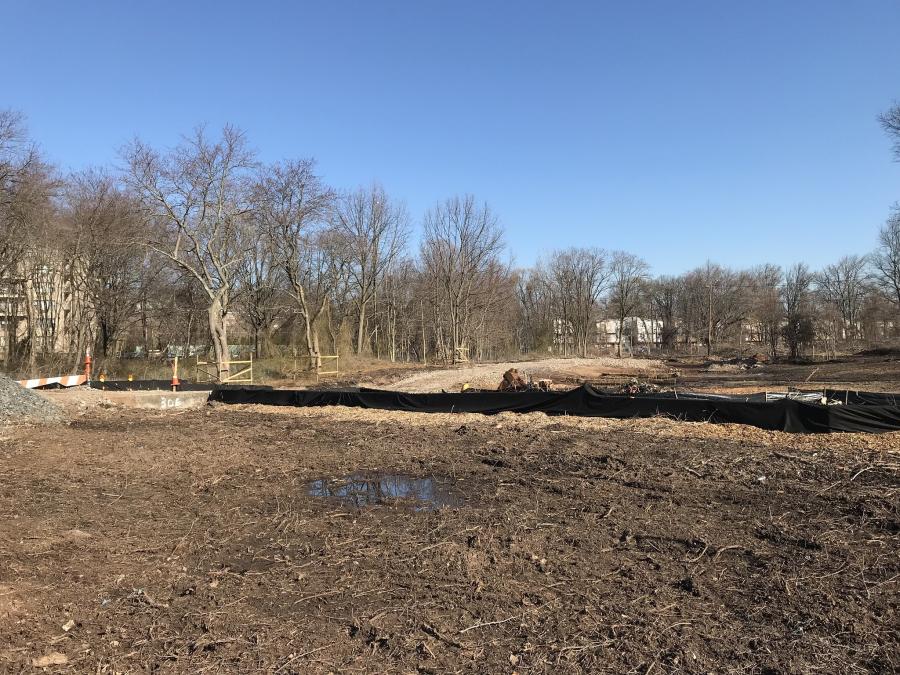 During this Phase II of the New Creek Bluebelt project, two new wetlands will be built at Last Chance Pond Park, which is owned by both DEP and NYC Parks. Stormwater collected from surrounding roadways will be directed to this enhanced waterway, or Bluebelt wetland, which will allow the water to be naturally filtered to protect the health of New Creek and New York Harbor.

These wetlands will slow the stormwater down after it empties from the sewer system and detain it, allowing it to be naturally filtered. The water will then flow over a weir to be built on the upstream side of New Creek at Hylan Boulevard.

In a later capital project, the culvert that conveys the Creek under Hylan Boulevard will be replaced and more wetlands created on the downstream side of Hylan Boulevard.

Eventually, the system connects to stormwater flow from the recently completed Phase I of the Bluebelt south of Olympia Boulevard near Slater Boulevard, and then empties into lower New York Harbor.

According to Khan, before the project began, much of this property was covered with Phragmites australis, or common reed grass, which is prone to brush fires. By removing the Phragmites and adding more diverse wetland plantings, the threat of brush fires will be reduced and the area will likely attract more wildlife. The work will include the installation of more than 61,000 herbaceous plants, including wildflowers, 295 woody shrubs and 342 trees. 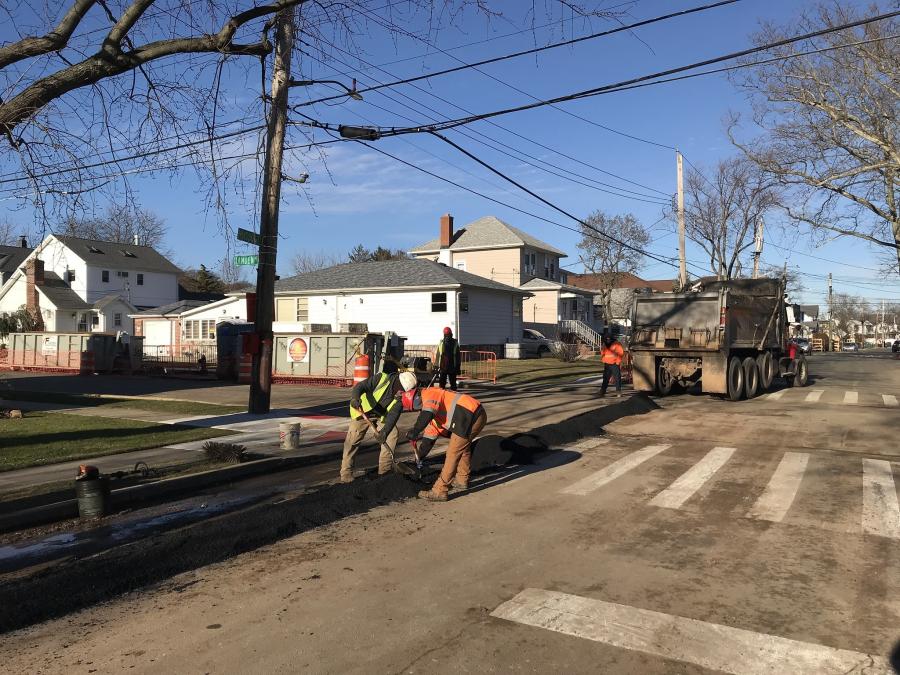 While the roadway is open to install the sewers, almost 10,000 linear ft. of new water mains also will be built to replace the older cast iron pipes. This will improve water distribution in the area while the 35 new hydrants slated to be installed will ensure firefighters have ready access to the city's water supply.

Construction also will include 84 catch basins and nine stormwater chambers to create additional capacity in the neighborhood's drainage system.

"The construction of BMP's NC-11 and NC-12 requires the partial clearing of multiple acres of land," Khan said. "Salvaging aquatic and semi aquatic plants with temporarily relocation and replanting at the end of the project requires careful planning as the activities are seasonally dependent. Also, a methodical approach to eradicating the invasive species within the property needs to be taken for the project to be successful."

Another challenge with the project noted by Khan is that properties within and around Bluebelt BMPs NC-11 and NC-12 are not entirely DEP owned and regulated. Coordination and compliance with all of the stakeholders (Parks, DEC, private owners) requirements is needed for the development of the site. 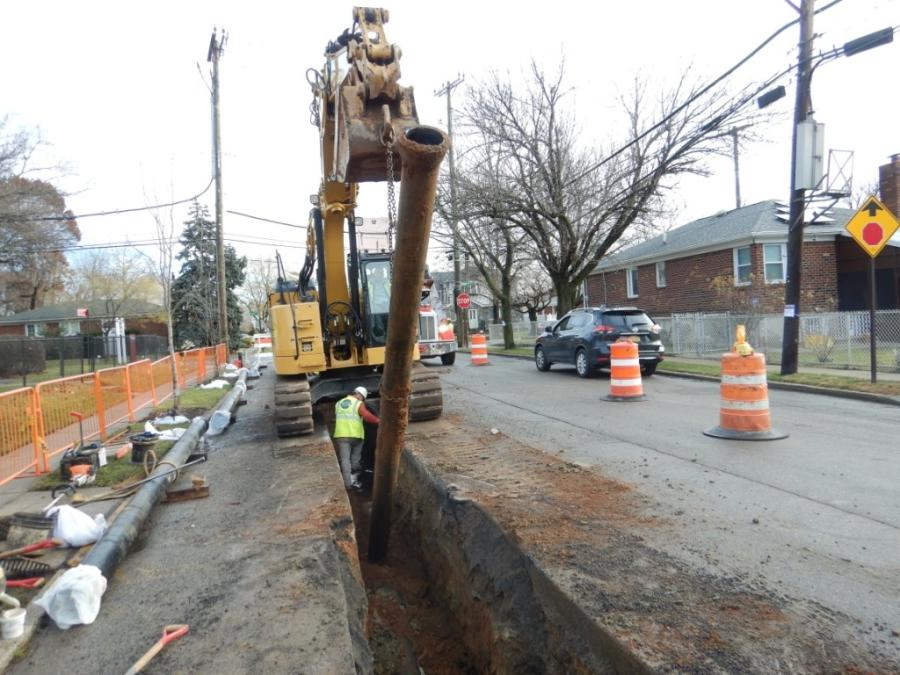 "The Husson Street project is bound by both the Staten Island Railroad and Hylan Boulevard.," Khan said. "There are a number of narrow streets within the limits. This presents challenges to maintaining local vehicle traffic."

She noted that groundwater as high as four feet below grade in some areas of the project requires dewatering to facilitate construction. Permitting and ongoing monitoring is required to maintain regulatory compliance during construction.

Another challenge is that an active stream runs through the BMP site, and must therefore be maintained during construction. A diversion stream was created to shift the water away from the proposed streambed to allow for work in this area.

"Working in protected wetlands also requires carefully catching and releasing some wildlife in order to relocate them away from the active construction," Khan said.

For more than 20 years, DEP has built Bluebelts throughout Staten Island. In the south Richmond and Mid-Island areas, the city has purchased approximately 400 acres to construct the Bluebelt systems that support better drainage and wetland preservation with naturalized infrastructure.

The Bluebelts also provide important open spaces and serve as a habitat for diverse wildlife. More than 70 Bluebelts have been built across Staten Island, with additional sites under construction now and others being planned for the future.

About the NYC Department of Design and Construction

The Department of Design and Construction is the city's primary capital construction project manager. The DDC provides communities with new or renovated public buildings such as firehouses, libraries, police precincts and new or upgraded roads, sewers and water mains in all five boroughs. To manage this $14 billion portfolio, DDC partners with other city agencies, architects and consultants, whose experience bring efficient, innovative and environmentally-conscious design and construction strategies to city projects.

About the NYC Department of Environmental Protection

DEP manages New York City's water supply, providing more than 1 billion gal. of high-quality drinking water each day to more than 9.6 million residents, including 8.6 million in New York City. The water is delivered from a watershed that extends more than 125 miles from the city, consisting of 19 reservoirs and three controlled lakes. Approximately 7,000 mi. of water mains, tunnels and aqueducts bring water to homes and businesses throughout the five boroughs, and 7,500 mi. of sewer lines and 96 pump stations take wastewater to 14 in-city treatment plants. DEP has nearly 6,000 employees, including almost 1,000 in the upstate watershed. In addition, DEP has a robust capital program, with a planned $19.4 billion in investments over the next 10 years that will create up to 3,000 construction-related jobs per year. CEG