Prinoth Panther Proves Its Mettle Way, Way Down Under 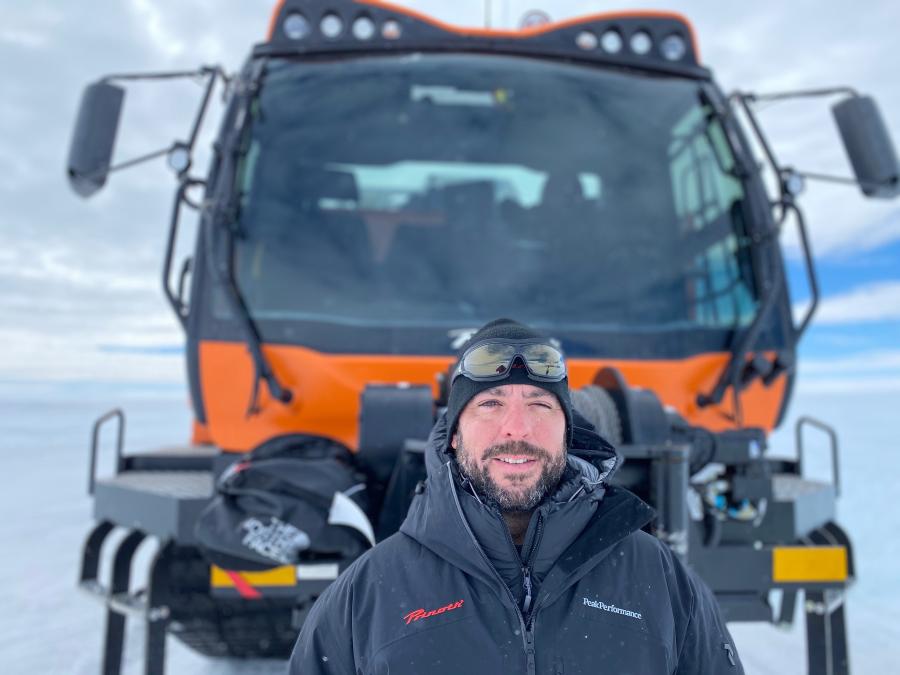 Prinoth’s Director of Engineering at the North American office Eric Steben stands in front of Panther vehicle in Antarctica.

Eric Steben traveled to the end of the earth — the southern end — to see how a one-of-a-kind tracked vehicle behaved under harsh conditions. The Antarctica laboratory proved the value of the specialized machine and the engineering expertise of Steben and colleagues. Some of the solutions derived from the experience still are being applied.

Steben is director of engineering at the North American office of Prinoth, which is headquartered in Sterzing (Vipiteno), Italy. Over the past 60 years, the manufacturing company has ridden tracks to commercial success in the snow-grooming industry and in more recent decades has become a major player in the tracked utility vehicle market.

It was the latter expertise that in 2018 attracted an order for the custom machine from officials of the Norwegian Antarctica station. Like all teams of scientists operating on the bitter cold continent, Norway's Antarctic crew is supplied by ship via a temporary ice shelf port on the coast of Antarctica, with shipped materials then transported inland to its station. Prinoth was tasked with developing a vehicle that could more efficiently and safely make that long-distance trek in wintry conditions marked by periodic 200-mph winds and months of either uninterrupted sunshine or total darkness.

"For sure, this machine application is extreme," Steben said from his office in Granby, Quebec, Canada. "Our experience in Antarctica is telling us a lot."

The learning experience actually began in Granby, where Prinoth engineers pieced together a new machine using tried-and-true components from existing Prinoth crawler carriers. As the process got under way, it soon became evident that existing platforms needed to be reimagined for this vehicle and a novel powertrain created.

The Prinoth engineers had a stable of proven machinery from which to pull components and inspiration. The company's Panther Series of tracked vehicles have identifying markers that attest to their being a family of machines. All are powered by Caterpillar diesel engines. All have truck-type chassis. All ride on an undercarriage of unusual design.

"Our machines have several advantages," Steben said, "and one of them is the way the undercarriage, the suspension system, is designed."

Instead of relying on small bogies to carry tracks, the Panthers feature large wheels, compressible suspension components and high-torque sprockets that easily overcome uneven terrain. And because the engine sits high on the frame, some Panther models can ford watery areas more than four feet deep.

The smallest vehicle in Prinoth's lineup of tracked utility machinery is the Panther T6. That model is just 8 ft. wide and nearly twice that long. It can haul six tons, travel almost 10 mph and climb 60-degree grades. It is powered by a 143-hp. Caterpillar diesel engine, rides on rubber tracks and can be configured with either a one- or two-seat cabin.

At the top end, Prinoth offers the T22, which has a payload of 23 tons. It's 11 ft. wide and almost 30 ft. long, has a 400-hp. Cat engine and rides on hardened-steel tracks, the only Panther to do so. Weight is one reason for that, according to Steben.

"Most of our fleet is on rubber, with the T16 available with rubber or steel," he said.

Current technology doesn't lend itself to producing rubber tracks for the heaviest units.

Because a truck chassis is common to each model, Steben noted that the machines are as versatile as trucks in their configuration — as firefighting equipment, as service trucks for off-road machinery, as pipelaying auxiliary equipment and so on.

A major difference, of course, is that Panther tracked vehicles can work where trucks cannot.

So, this heritage of off-road proficiency was drawn upon to fashion a machine for Antarctica. The vehicle would be asked to safely and efficiently traverse unbroken expanses of ice and snow with optimal fuel consumption, at low-cost-per-ton haulage, and with minimal manning of equipment, all the while hooked to a tracked trailer with an onboard crane.

Steben said the first engineering impulse was to add a trailer to the Panther T12, but that idea soon faded. Unlike previous custom machinery developed by the company, this novel project took the engineers further afield. "It was almost starting from zero," he said.

The Panther T16 became the starting point. It can carry almost 17 tons and is popularly configured with a dump box or flatbed and often is outfitted with digger derricks and cranes. The T16's strong chassis was co-opted for the Antarctic machine. Because an engine larger than the T16's 300-hp. unit was needed, Cat came up with a 580-hp. diesel. The operator cabin on a Prinoth Bison snow grooming machine was adapted to the vehicle.

However, the drivetrain is where the engineering team really earned its chops. The project specs called for a tracked vehicle and trailer functioning as a single unit, with a removable unloading crane affixed to the trailer. Rather than have the lead vehicle simply drag the trailer — a starkly inefficient arrangement — full tractive power was desired for each of the joined units. Consequently, power needed to be transmitted somehow from the Cat engine to axles on both the lead vehicle and the trailing one. 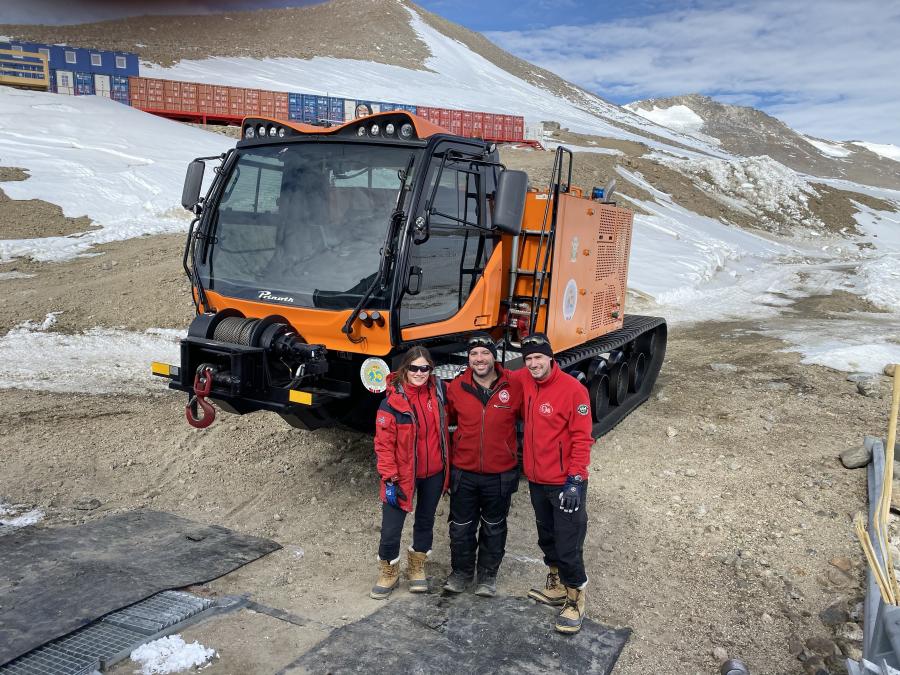 The solution was to engineer a hydrostatic transmission for each unit and electronically yoke them to function as one. Among other things, this required synchronizing the speed and torque of each transmission during turns, when relative turn speeds get complicated. "You can imagine some of the challenges we faced," Steben said.

The challenges were met and the unique machine was tested extensively on the proving grounds at Granby, one of several test areas the company utilizes worldwide to prove and improve its machinery. Finally, after two years of development, the new machine was shipped south to rumble around that far end of the earth.

Steben traveled there from Canada last November to observe the vehicle in operation. His purpose was to optimize the vehicle's performance under stark conditions not fully replicable on the proving grounds.

"I was surprised by so many things down there," he said. "Everything is so windy and dry. The wind is terrible — sometimes reaching 200 mph — so you can imagine how paint is affected, for example. It's constantly being blasted by sand or ice. But there is no humidity, so there is no rust."

Prinoth is well-versed on how to maintain machines in snow and cold, but the extreme environment of Antarctica raises to another level the need for machine reliability. Being stranded by mechanical failure somewhere on the continent can be a death sentence.

"Ease of repairing and making everything accessible always is important," he said. "In Antarctica, this very basic stuff is extra important. Your life can depend on the small things. In those conditions, it's not just having a piece of equipment to do a job. It's that while you're doing the job, you need to survive also."

The borrowed components of Prinoth vehicles performed well, as expected. Steben pointed out that the Panther T16 "had been tested many, many hours and many winters in the field. We knew that wouldn't be a big issue. The subzero temperatures of Antarctica were not new for the equipment, but the winds were."

The experience way down south gave Prinoth engineers some new things to think about, such as the effect on the cab environment of glaring snow and 24-hour sunlight.

"Even when it is pretty cold there, with all the tinted glass of the cabin, it can be pretty warm inside. You almost need air conditioning."

They also witnessed the literal impact of traveling across pure ice — "a very, very hard" surface. How the suspension system absorbed this punishment, or didn't, was carefully noted. So, increasing cabin comfort and improving suspension systems were some of the lessons the engineers took away from Antarctica and hope to incorporate in other Prinoth vehicles moving forward.

While the vehicle as configured has not yet attracted orders from other customers, some interest has been shown by officials at other Antarctic stations. But the project itself has spawned confidence inside Prinoth — which is part of HTI Group — that it can successfully develop out-of-the-ordinary equipment.

"It once again shows we can do very special vehicles," Steben said. "We can do one-of-a-kind, fully custom special solutions. More people outside the company now realize our capacity and ability to do stuff that nobody has done before. That is going to help us."

The company's utility vehicle division continues to experience growth. Big rental houses have Prinoth machinery on their lots. Heavy equipment dealers are carrying the Panther line as an extension of their product offerings. Dealerships are cropping up around the world. Prinoth has engineering staff and manufacturing facilities in both Granby and Italy. Granby specializes in the crawler carriers and Bison snow groomers.

Currently, the Panther T14R is the machine most in demand. The mid-size (15-ton) crawler features a rotating chassis fitted with a dump bed and is deemed to be the fastest (8 mph) tracked vehicle in its class with the biggest payload.

"It is very quick-maneuvering, and is very popular for disaster-recovery work or when working close to a seashore or riverbed," Steben said.

As for the future, there may or may not be more Prinoth end-of-the-world machines, but autonomous snow groomer concept vehicles are well along in their development. The overall concept includes such goodies as 3D drone scanning, obstacle recognition and failure prediction technologies. The knowledge gleaned from this development eventually will applied to the company's other tracked vehicles. CEG