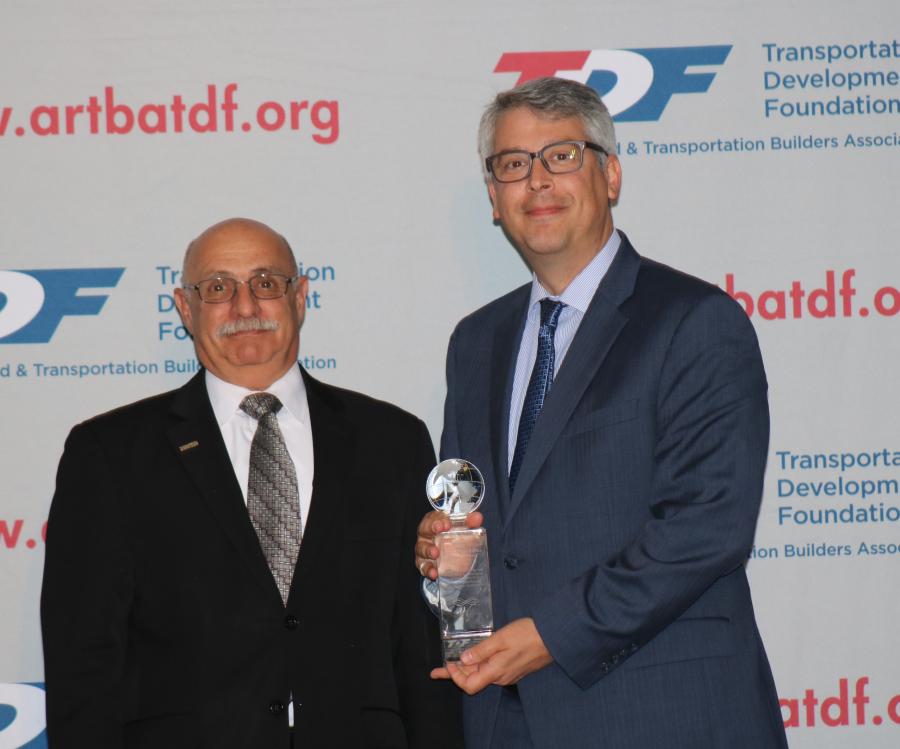 Highway, bridge and local road projects from Indiana, Utah, Pennsylvania, North Carolina and Washington state were recognized for their contributions to environmental protection and mitigation by the American Road & Transportation Builders Association Transportation Development Foundation (ARTBA-TDF) at a May 14 luncheon in the Nation's Capital. The event was part of the association's Federal Issues Program.

An independent panel of industry professionals reviewed the nominations and selected the winners in two categories. The 2019 winners are:

The Smart Streets Initiative in downtown South Bend, Ind., provides "safer, more pedestrian and bicycle-friendly streets, while enhancing the local community as a catalyst for economic growth." The three-year project converted 8 miles of two multi-lane one-way pair arterials through downtown to two-way urban "complete streets" that include new streetscapes, traffic signals, roundabouts, traffic-calming measures and off-street bike facilities. The project utilized pervious pavement in new parking lanes, an environmentally friendly way to reduce storm water runoff and trees planted in the area were chosen based on their ability to thrive in an urban area.

Utah's first overpass built specifically for wildlife crosses the I-80 corridor through Parley's Canyon, a Utah location that has seen vehicle collisions with more than 40 moose in the last 10 years. Those collisions endanger the lives of motorists and commercial truck drivers using the heavily-traveled corridor. The bridge is located within the migratory path of moose, elk and other wildlife and was designed to blend in with the natural surroundings to "influence" the animals to use the bridge. Built in a critical watershed area for Salt Lake County, the project required environmental protection and mitigation measures during construction, including using recycled asphalt products in its pavement to reduce impacts associated with hauling new materials to the site. It was completed under budget and ahead of schedule.

The Beechwood Boulevard Bridge replacement project linking Greenfield and Schenley Park in Pittsburgh serves not only as a transportation facility, but also as an entrance to one of the city's largest and most historic parks. The bridge spans one of the busiest stretches of I-376 in western Pennsylvania, with 85,000 vehicles per day crossing under the structure. Architectural features of the original 1922 bridge were saved and incorporated into the new structure, while a new, wider bridge footprint allowed for the needs of both vehicles, and pedestrian and bike traffic. By eliminating deck joints over the structural steel, water should not leak through new expansion joints or cause deterioration of the underlying structural steel or substructure as happened to the deck of the previous bridge.

Recognized as one of the most dangerous channels on the Atlantic Coast, Oregon Inlet routinely experiences treacherous currents and violent storms. The Inlet also is surrounded by North Carolina's Outer Banks.

The original 1963 Herbert C. Bonner Bridge provided a critical link across the inlet between Cape Hatteras National Seashore and the towns of Nags Head and Kitty Hawk to the north and the Pea Island National Wildlife Refuge and the town of Hatteras to the south. The bridge deteriorated in the harsh marine environment, resulting in continual maintenance, repair and retrofit by the North Carolina Department of Transportation.

The new replacement bridge is designed to provide a 100-year service life, minimize environmental impacts, and provide a reliable, safe passageway for residents, and the nearly 2 million tourists that cross the bridge annually. The 2.8-mile-long span features several innovations including nine navigation zone spans that provide enough clearance as the inlet's channel shifts, and lights and other markings that can be moved from one span to another to indicate to ships which channel to use. The project team took steps to minimize the impacts of lighting at night during construction to not disrupt turtle nesting grounds on adjacent beaches, and limited road signage to provide fewer perching locations for predator species of the near-threatened piping plovers that live at the shoreline.

The 2-mile State Route 99 tunnel underneath downtown Seattle is the largest soft-ground bored tunnel in the United States, with a 57.5-ft. excavated tunnel diameter and 200 ft. at its deepest point. It was a critical part of the $3.3 billion Alaskan Way Viaduct Replacement project, one of the largest infrastructure projects in the nation.

Built to collect storm drainage, the tunnel includes systems that monitor for pollutants that may be discharged within it in the event of a spill or similar event. It was designed to withstand a 2,500-year interval earthquake, or roughly a 9.0 seismic event, while mitigating impacts on the surrounding environment. The tunnel's completion has cleared the way for the demolition and removal of the existing Alaskan Way Viaduct — now under way — which will be replaced by new public space as part of a new Waterfront Seattle program.