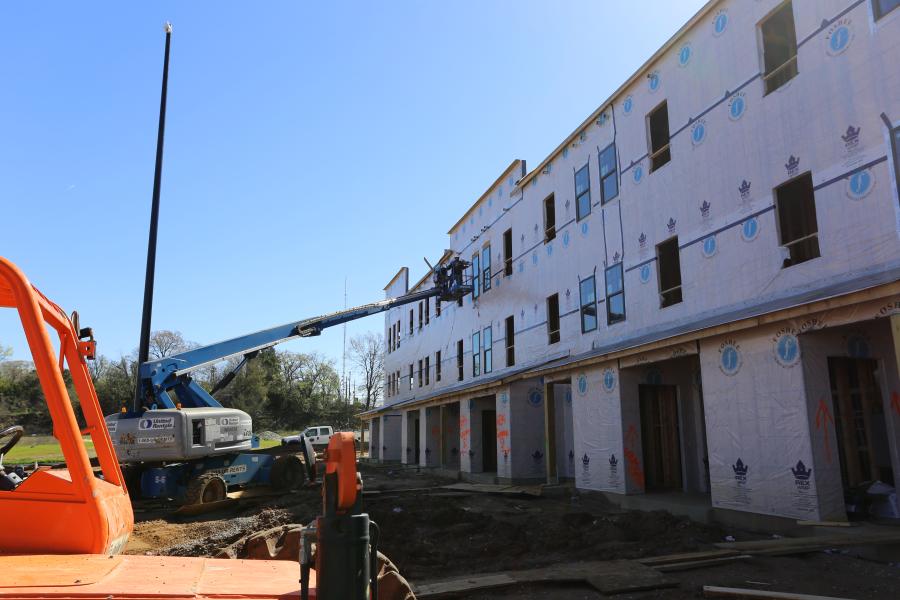 A $15 million housing development being built in Montgomery, Ala., will bring new life to a long neglected area. The first phase of Columbus Square will consist of 80 market-rate and affordable apartments/town homes.

The new development is being built on land owned by the Montgomery Housing Authority (MHA). The community was designed in an industrial style, to blend with the downtown district. The site, located near Old Alabama Town, is within walking distance of hotels, restaurants, museums and a minor league baseball stadium.

“Columbus Square is an important development project for the Montgomery Housing Authority, because it addresses the demand for high quality, affordable housing in the city of Montgomery,” said Evette Hester, executive director of the MHA. “It's also an integral part of the city of Montgomery's downtown revitalization plan. The new community will be comprised of affordable and market rate dwelling units. The first units will be available for occupancy in July/August 2017.

In September 2016, MHA held an official event to launch the highly anticipated project.

“The groundbreaking ceremony was an opportunity for the Montgomery Housing Authority to showcase the important work it does in the community on behalf of the citizens of Montgomery. It also has afforded us the opportunity to demonstrate that we care about families and the communities in which they live,” said Hester.

“Government officials, business and community partners, along with former residents, came together to experience this historic event. Attendees walked away with commemorative gifts, including an original brick from the former Trenholm Court community with an engraving symbolizing both the past and future.”

“Many former residents in attendance expressed gratitude, but also felt melancholy as they reminisced with friends about growing up in Trenholm Court, and appreciated the sense of community they shared. They also recalled that the old Trenholm Court was once considered state-of-the art because, at that time, many homes in the city lacked indoor plumbing,” said Hester.

In 2009, MHA submitted an application to the U.S. Department of Housing and Urban Development (HUD) requesting authorization to demolish 45 buildings at the site of the former Trenholm Court community, because of deterioration. At that time, it was determined the community was in need of major renovation and that the cost to renovate, including sustainable design and amenities, was comparable to rebuilding.

In 2011, MHA received approval from HUD to demolish Trenholm Court. Construction is progressing according to schedule and within the established budget. The first building at the former Trenholm Court was demolished in 2012.

“Anytime the Montgomery Housing Authority and its partners are able to provide quality affordable housing to low-income individuals, which exponentially elevates the quality of life, it's very gratifying. This is our purpose and mission,” said Hester.

According to Lois Cortell, senior development manager, department of development, city of Montgomery, “The Columbus Square project is going to be a very important project for downtown Montgomery, which is clearly renewing itself and moving forward. It has been ten years now since the city of Montgomery challenged itself to take on major catalytic investments, from the Riverwalk Amphitheater and Riverwalk Stadium for Biscuits AA Baseball, to the Cramton Bowl Multiplex sports arena, to more recent investments like the Alley Entertainment District and Lower Dexter Avenue property and streetscape investments.

“We are very keen to see more and more opportunities for people to live downtown. With those residents follow businesses and services to cater to them. The Columbus Square project does just that, and, as such, is a critically important part of meeting that goal. We look forward to seeing the property come back to life,” said Cortell.

According to Cortell, as downtown Montgomery continues to see a revitalization, Columbus Square will serve an important role in the development of the city and the community.

“This project is situated only a few blocks from the capitol and the business districts, where thousands of workers file into downtown every morning, at the dawn of a new work day. Its proximity to downtown not only provides an opportunity for its residents, but Columbus Square will also serve as an opportunity to the many businesses that are looking to fill positions within its workforce.”

Apartments range in size from 731 sq. ft. (67.9 sq m) to 1,532 sq. ft. (142 sq m). Each upstairs unit has a private entrance and private stair, and within the three story buildings, the upstairs apartments are two-story townhouse type units occupying floors two and three of the building.

Also involved in the project are Buffalo-based Norstar Development USA, LP and the architectural firm McKean & Associates, of Montgomery. John H. Foshee, Manager of Foshee Design & Construction, LLCFoshee, a licensed architect, general contractor and real estate broker, said because the site was home to a former a low-income, public housing project, built in the 1950s, crews expected to find remnants of the previous buildings.

“We were pleasantly surprised at how little building materials remained on site and underground, following the demolition of Trenholm Court several years ago. While the wonderful spirit of the former residence remained on site, all physical indications of the previous public housing project were removed years earlier.

“While there have not been any large problems, this particular project offers some unique challenges, simply due to the number of people involved. It can be fascinating to watch as the developer, the housing authority, the lender, the city, the architect and general contractor come together with each and every decision on the project.”

Currently, the internal roads and parking are complete, all concrete slabs are in place and framing is winding down on the last building. The rough trades, including plumbing, mechanical, electrical and fire sprinklers, are working their way through the first several buildings.

The utility work included domestic water, fire line, sanitary sewer, and storm water. All new utilities tied into the city utilities underground, around the perimeter of the site. Erosion control is considered a constant battle that crews must continually maintain throughout the course of the project.

Main equipment on site has included track hoes, dozers and mud trucks. With such a limited site, there was not a lot of room for larger equipment on the project, which includes concrete slab on grade, wood framed, brick and cement board siding, with metal and asphalt shingle roofing.

Foshee also said the weather has been an important factor during construction.

“Typically in the construction industry, we live and die at the hand of Mother Nature. At the very beginning of this particular project, we hit a streak of two to three months with little to no rain, which is very unusual in the middle of the summer in central Alabama. The timing could not have been better, as we were able to start the site work crews, mobilize the heavy equipment and begin turning dirt faster than anticipated. After only three months, we found ourselves a full month ahead of schedule.”

As construction continues, officials await completion of the project, which has been described as a team achievement. According to John Knight, chairman of MHA's board of commissioners, “This is a collaborative effort between the private and public sectors and is pivotal in transforming communities, in an era of dwindling public dollars. We thank the Alabama Housing Finance Authority, Mayor Todd Strange, the MHA board of commissioners and our development team for their unwavering commitment to providing high-quality, affordable housing to the citizens of Montgomery.”

Columbus Square is one of a large number of development and renovation activities that MHA has been a part of recently to help the city's economically diverse communities. The Montgomery Housing Authority administers a public housing program created to assist low to moderate income families with affordable, sustainable housing, while improving the quality of their lives and encouraging independence. MHA currently owns, manages and is affiliated with more than a half-dozen affordable housing communities, with the public housing program serving more than 1,400 families.—CEG