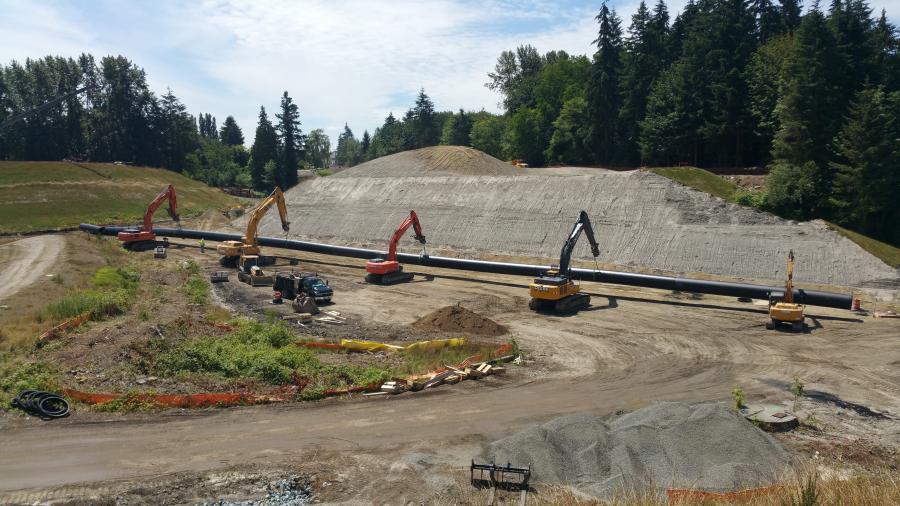 “They used sheep to compact roads,” said Ed Hansen, general superintendent of Ceccanti Inc. in Tacoma, Wash. “They have small feet and [workers] would run the sheep back and forth over the fill.”

That's pretty much the same method Ceccanti is using to build a new road for the city of SeaTac, Wash., but instead of flocks of sheep, Ceccanti is using a Caterpillar 825G front loader with sheep's feet steel wheels.

Ceccanti bought the Cat 825G specifically for this project because the fill material that had been stockpiled on site was too moist. A conventional vibratory roller would have squeezed excess moisture to the surface as it compacted the fill, but the numerous studs — or sheep's feet — on the Cat 825G's wheels compact the fill without mucking things up.

When construction concludes in August 2017, the two-thirds mi. (1.1 km) road will complete a missing north/south link between 24th Avenue South and 28th Avenue South near Seattle-Tacoma International Airport. Once united, the two arterials will create a new corridor for traffic traveling to and from the south end of the airport and for commuters catching the train at a nearby Sound Transit light rail station.

In addition, the new corridor will relieve congestion on nearby state Route 99 and open up adjacent real estate for development, most of it vacant land owned by the Port of Seattle, which operates the airport.

The $24 million project ($14 million for construction and the rest for design and right-of-way) will provide two lanes in each direction, left-turn pockets and pedestrian/bicycle paths on both sides of the road. The new road also includes stormwater collection/treatment facilities, retaining walls, street lighting, traffic signals, underground utilities and a 128-ft.-long (39 m) bridge.

The bridge spans the future path of a westward extension of state Route 509. In anticipation of the extension, Ceccanti is building a 150-ft. (46 m) tunnel under the new road that will become part of an on-ramp for the SR 509 extension. SR 509 currently ends at the airport. The extension, which is still in the planning stages, will connect SR 509 with Interstate 5.

CH2M, which has an office in Bellevue, Wash., designed the new road. Funding comes from the city of SeaTac, Sound Transit, the Port of Seattle (which operates the airport) and grants from the Washington State Department of Transportation, Freight Mobility Strategic Investment Board and Transportation Improvement Board. When all is said and done, about 200 workers will take part in the project.

Construction began in June 2016. One of the most urgent tasks was to finish a pair of 150-ft.-long (46 m) embankments before the autumn rains arrived. As summer ended and the threat of erosion from wet weather mounted, Ceccanti stepped on the gas, adding a Saturday shift as it hauled and deposited 4,000 cu. yds. (3,058 cu m) of fill each day using two company-owned Volvo A40G off-road dump trucks. “They were the workhorses,” Hansen said.

Once completed, the embankments were hydroseeded, but much of the grass didn't take root in time, so Ceccanti covered everything with six acres of plastic to prevent erosion.

Another crucial step involved laying a pair of 310-ft.-long (94 m) pipes — a 54-in. diameter (137 cm) stormwater pipe and a 14-in. diameter (36 cm) sewer pipe. Segments of each pipe were welded together above ground. Each entire pipe was then lifted into a separate trench by multiple pieces of company owned equipment positioned all along each pipe to prevent it from sagging and bending.

Ceccanti deployed five excavators to lift the stormwater pipe — a John Deere 550C and 470G, two John Deere 120s and a 270 Hitachi. The sewer pipe was lifted by four of those excavators and a Grove RT890E crane.

Although they play no role in the road's actual construction, four company owned Kenworth 880 truck-and-trailers are delivering 50,000 tons (45,359 t) of supplies and materials to the construction site.

One end of the new road crosses a valley — hence the bridge and embankments. The other end of the road runs through a cut that requires construction of two 750-ft. long (229 m) retaining walls. Versatile Drilling of Seattle is drilling and grouting the soldier piles for the concrete walls using a Bay Shore LoDrill HT 50.

Wright Runstad, a Seattle developer, has an option to buy seven acres adjacent to the new road. The land is zoned for commercial development with height limits of between 15 and 18 stories. The developer, which declined comment for this story, has said the land is best suited for office space, a hotel and/or retail, according to the Seattle Daily Journal of Commerce.

The city of SeaTac estimates the new road will stimulate more than $32 million in economic activity over the next 20 years and support the creation of 15,000 jobs.