The Esther Jackson facility in Roswell, Ga., will open its doors in August 2016. 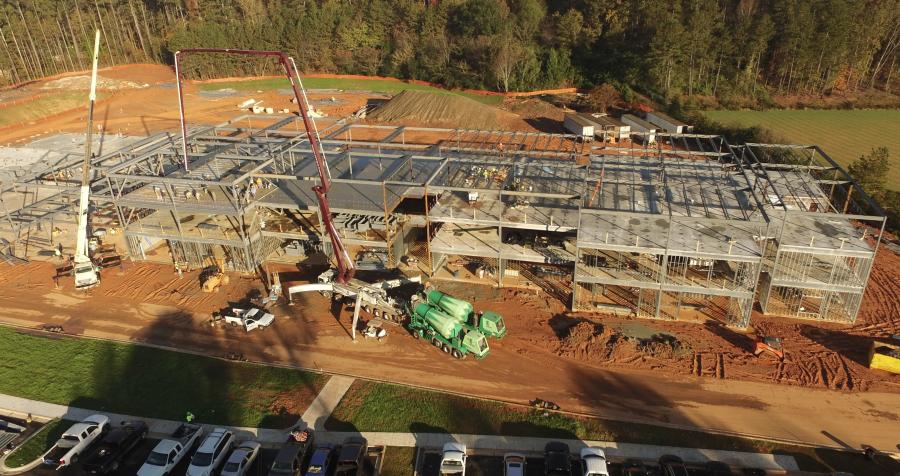 Carroll Daniel Construction Company photo Considered the next generation of the new, multi-story elementary school prototypes designed for the Fulton County Board of Education, the replacement Esther Jackson facility in Roswell, Ga., will open its doors

Considered the next generation of the new, multi-story elementary school prototypes designed for the Fulton County Board of Education, the replacement Esther Jackson facility in Roswell, Ga., will open its doors in August 2016. Construction continues at a steady pace.

“It’s an exciting project for us, because we are able to offer a state-of-the-art educational facility that’s beautiful and equipped with the latest in technology and energy-efficiency elements,” said Susan Hale, Fulton County Schools media relations manager. “The school where students are temporarily housed is identical in design, and students, parents and staff have been extremely pleased with it. They’re enjoying the ’rental’ of that space , but will be equally excited to move into the new Esther Jackson building that’s completely their own.”

The school district purchased property on Highway 9, in order to construct a new elementary school serving as temporary quarters for students and teachers from Esther Jackson. The new structure serves as a ‘swing school,’ while the facility at the Martin Road site is being rebuilt.

“The school they are in now will be renamed and will reopen to a new population of students next fall,” said Hale. “We are currently in the redistricting process to create that new student body and balance enrollments among other elementary schools in the area. The old Esther Jackson building was not only aging, but it was too small to house its student body. The opening of the new Esther Jackson Elementary School, and the soon-to-be-renamed West Roswell/Highway 9 elementary school site, will help alleviate overcrowding and balance enrollments among the area’s schools.”

The prototype was created to address the limited availability of large land parcels within the county. The compact plan organization offers the same programmatic spaces and site amenities found in other Fulton County elementary school prototypes, but within the constraints of a smaller footprint. The school is organized in a linear east-west direction with K-5 classrooms stacked within the east wing,with the core functions — media center, music, gymnasium, cafetorium and administrative suites — at the west end of the building. This creates a vertical column of core spaces which can be isolated from the classroom spaces for after-school and community-use functions.

The layout of the school is less confusing to young children, and provides good opportunity for visual observation for administration and staff. It also allows for natural light within the corridors and in each classroom. The exterior material selections include brick veneer, metal and cast stone trim, which provides long-term durability against the effects of weather, while offering a building that is low in maintenance.

The school is being constructed through the one-penny education sales tax known as eSPLOST, which was approved by voters in November 2011. The tax is expected to raise $912 million for Fulton County school improvements over its five-year lifetime.

Carroll Daniel Construction Company of Gainesville, Ga., is the general contractor for the project. According to Henry Irvin senior project manager, the project is a fast-paced tear down and rebuild of approximately 130,000 sq. ft. (12,077 sq m).

“The tear down of the existing school and replacement with a new facility is a lot to accomplish in one calendar year.

Approximately 60,000 cu. yds. (45,873 cu m) of dirt/material will be moved on the project. Currently, structural steel erection of the café and administration areas is taking place, along with roof decking over the three-story section, MEP rough ins on the first and second floors, exterior sheathing, wall layout on the third floor and prepping and pouring the exterior site retaining walls. Finishes, glass and glazing and roofing are among the tasks that have yet to be carried out.

Equipment at the site includes scissor lifts, which are being used to install overhead systems. Lulls and forklifts are required to unload trucks and bring materials to the building. Cranes are being utilized to erect steel and set materials on the roof, while skidsteers and dozers are needed to maintain the site. Excavators were used for underground utility installation, and concrete pump trucks are on hand for slab pours. Some of the main materials being used include structural steel, concrete, metal studs and sheathing/drywall.

Irvin said crews have made a special effort to stay ahead of the challenges that come with winter conditions.

“We try to get asphalt binder down before the rainy cold months to stage the project from. We are trying to roof and sheath the building before the cold weather really sets in.”

Workers made a point of placing as much concrete as possible in advance of the wet season.

“We tried to install as much of the underground utility infrastructure as possible early on in the project. This allows for the placement of asphalt and concrete. We can then stage the project off these surfaces instead of fighting mud that comes from the rainy season at the end of the year,” Irvin said.

The most time-consuming part of the job has involved making sure that all the pieces of the project are approved, fabricated, delivered and installed at the time they are needed, as the schedule allows for no room for slippage.

Reviewing submissions, checking shop drawings, sequencing work and subcontractors in the most efficient manner possible have all been integral and crucial parts to maintaining the schedule. The remediation of some soils was an unforeseen condition that also had to be addressed.

Assistant project manager Jay Wilhoite said, “hitting unsuitable soils delayed the project, and was mitigated by working extra hours, nights and weekends to pick back up to remain on schedule.”

Crews have already completed grading of the new site, as well as underground detention, curb and gutter and the pouring of slab on grade.

“Once we have a roof on the building, weather will no longer be able to dictate working days and we’ll begin transitioning into installing glass and glazing, hanging drywall, installing ceilings, flooring and swinging doors,” said Wilhoite.

Although officials have chosen not to pursue any third-party certification, the new school would likely qualify for a LEED Silver or higher rating. Some of the notable sustainability components include high efficiency mechanical systems and energy recovery, low VOC finishes and carpet that’s part of the “closed-loop” recycling program and LED light fixtures. Building envelope improvements such as continuous insulation on the walls and roof and pray foam insulation in wall cavities and spray applied air barrier systems were also incorporated into the design, along with large windows in every classroom for day-lighting and green spaces for outdoor instruction and play.

Jeffrey Juliano, AIA, Collins Cooper Carusi Architects Inc., said the firm’s vision for this project was clear from the beginning.

“We wanted to develop a solution that addressed Fulton County Schools’ programmatic requirements, and at the same time provide the flexibility to adapt to various teaching methodologies and accommodate current and future technological changes needed for students to learn and achieve.

“The single most difficult challenge was the site size,” Juliano said. “Although it would become a design opportunity, the site was smaller than what we were accustomed to for an elementary school of this size. A portion of the site was designated wetlands, and much of the buildable area was dedicated to parking and outdoor play spaces, so we were limited to where and what we could build on the ground floor. As it would turn out, the small footprint pushed us to consider and eventually build a three-story solution. This provided the opportunity to create classroom and collaboration spaces on multiple floors which provided a variety of views and experiences.”

“Schools in particular can have a profound impact on a student’s ability to learn, especially elementary schools, since this is likely their first experience in a structured environment that is not day-care or pre-school. The quality of this environment can set the foundation for future learning and achievement. Chief among our concerns is the creation of an environment where the student feels safe and secure. We paid special attention to the materials used in the construction of the building, how the building will maintain a healthy environment for future generations and how the physical arrangement of spaces allow students to explore their surroundings.

“There really isn’t a particular feature we can single out, but more an overall experience of the entire building. We are interested in seeing how the various collaborative spaces will be used. We can plan a space for a particular use, but it’s interesting to see how the staff then interprets the use into a whole new thing that we did not think of,” said Juliano.

For Juliano and the rest of the team, having the school blend in with the community also was important.

“The surrounding neighborhood is primarily residential. We didn’t want to reconstruct a big house, but we did want to fit in materially. The new school is mostly brick veneer with stucco. In addition, we have gabled roofs with large overhangs.

“In general, schools are different from other projects. During the formative years, a child will spend as much time in school as they will at home, and the experience can have a profound impact. First and foremost, the student should feel safe and secure. This will set the environment for a student to be open to learning. From there it’s about opportunities for interaction between staff and fellow students. We think a lot about the ’in-between’ spaces where students talk and make friends, such as the small corners of a hallway or scaled areas within a larger space. We provide the structure to enhance the experience of learning.”

Approximately 85 percent of our work is in the educational market,with a little more than 50 percent of that in the public and private K-12 sector, so we have a very good understanding of how schools work and, just as important, how students learn. We know now that hands-on activities have a much greater impact and lasting impression than traditional teaching methods. We also understand students learn best when they are comfortable, safe and have experiences that touch all their senses. We try to provide these kinds of experiences through color, daylight, variety of classroom/collaboration spaces, including outdoor classroom opportunities, and the proper selection of furnishings.”

As for what students, teachers, parents and visitors should take away from the new facility Juliano said, “our hope is that they recognize there is something different in their experience of this school — that it makes for an environment they want to be in and be a part of. Our goal is to provide an environment that enhances the learning process.”