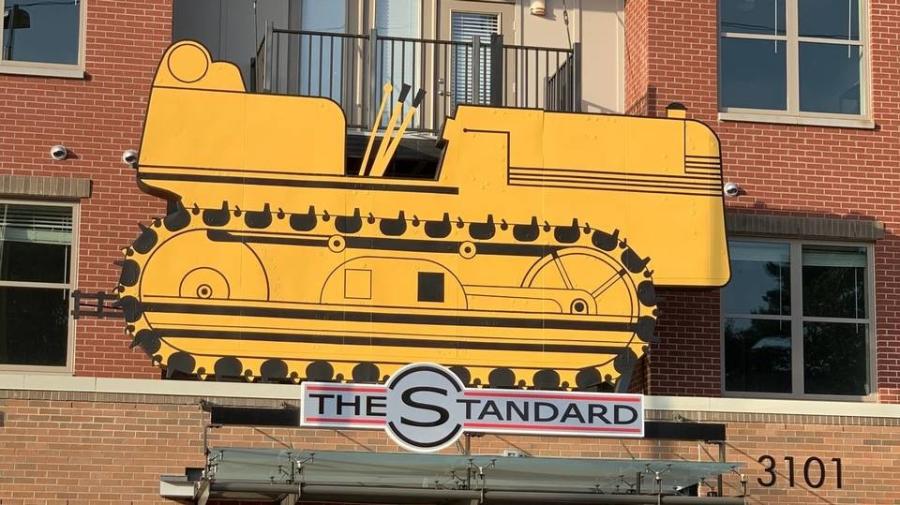 The old tractor sign from the former North Carolina Equipment Co. building has a new home on The Standard student apartment building along Raleigh's Hillsborough Street.

When residents began moving into The Standard, a new student apartment building on Hillsborough Street, many of them passed under a big yellow tractor that has watched over this stretch of the street since before World War II.

The metal bulldozer was part of a sign that sat atop the N.C. Equipment Co. building, which operated at the site from the 1930s until it was razed to make way for the apartments two years ago. Saving the tractor and incorporating it into the new building was a condition of the city's rezoning of the 3.2-acre site across from N.C. State University.

And so, the sign was lifted from atop the old building and placed in storage. It was installed above The Standard's front door on June 13, which pleased people who are fond of this small piece of Raleigh history.

"We like the tractor," said Wayne Mann, who works at the Reader's Corner bookstore on the next block. "We don't want to see it go."

The N.C. Equipment Co. sold and repaired industrial and construction equipment for decades. And for years, the bulldozer atop its building was lit up at night, with lights on its tracks that blinked on and off to make it look like it was moving. The sign became a landmark on what was then the western edge of the city, signaling to people that they'd arrived in Raleigh.

The lights had long disappeared and the tractor itself was tarnished by rust and peeling paint when entrepreneur Bob Young bought the building in 2007. As Young renovated the building to become home to his online book publishing company, Lulu, he had the tractor restored, though without the lights.

The tractor spoke to the "creative, offbeat culture" of his company, Young said at the time, and made it easier for visiting clients and pizza delivery drivers to find the building.

Nevertheless, in 2016 Young sold the building to Landmark Properties, a student housing development company based in Athens, Ga., which built The Standard.

Mann's co-worker at the Reader's Corner, Connie Jones, said she wished the restored dozer sign could be perpendicular to the street, the way it was on the old building, rather than flat against the four-story apartment building.

"It would be great if it were up on top," she added.

Preserving the tractor became a priority for city officials. Landmark's initial request to rezone the property was denied in part because the company's commitment to save the sign was too vague. A year later, the company returned with a new proposal with a promise to include the bulldozer on The Standard's facade.

Through a spokesman, the company said its architects worked with the city to decide where to place the sign.

"We are excited to return the restored and beloved N.C. Equipment Company bulldozer sign to its home on Hillsborough Street," the company said in a statement. "We're proud to be a part of the Raleigh community and have the local icon as a part of our new development."

Across from The Standard, at Nice Price Books and Records, Enoch Marchant said he was pleasantly surprised by how prominent the tractor is, though he described it is "a little incongruous." Marchant doubts the young students who will live in the building's 234 apartments will know the sign's story.

"I would guess that arriving residents are perplexed about the weird tractor stuck on the front of their apartment building," he said.

But Marchant can see a day, years from now, when the big yellow tractor will be considered a landmark by a new generation of people.

"I'm glad they kept it, rather than getting rid of it," he said, "because it is cool looking." 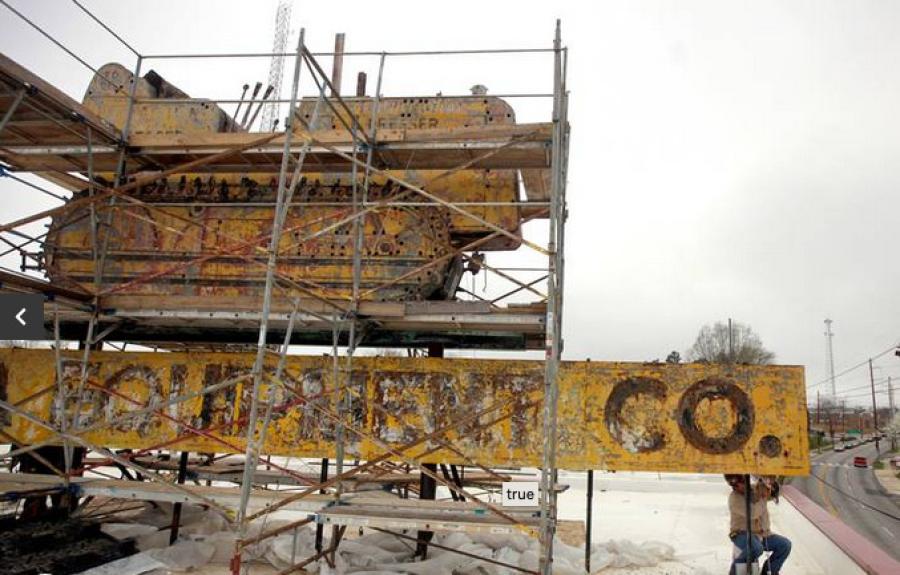 A photo from 2009 shows workers restoring the yellow tractor on the roof of the old N.C. Equipment Co. building on Hillsborough Street. (News & Observer file photo)