Raleigh is a rapidly growing and urbanizing city, and the transportation facilities need to meet current and future demands. 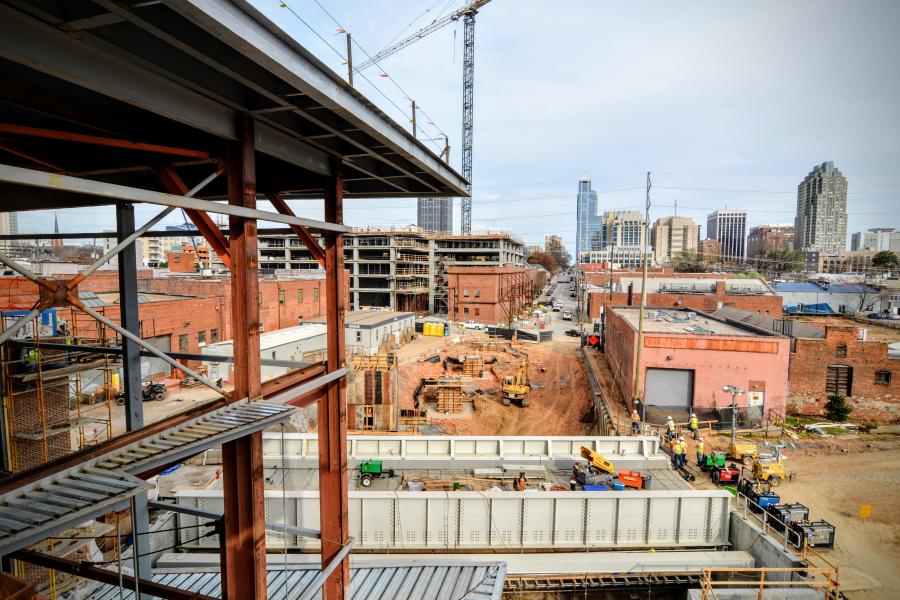 The North Carolina Department of Transportation (NCDOT) and the city of Raleigh have teamed to build the passenger train station. (City of Raleigh photo)

In North Carolina, construction continues on an $88 million multimodal facility planned for downtown Raleigh's warehouse district. The facility, known as Raleigh Union Station, is part of a 25-year vision outlining solutions to address congestion and land development concerns related to the expansion of mass transit in high-growth areas.

“Raleigh is a rapidly growing and urbanizing city, and the transportation facilities need to meet current and future demands,” said Roberta Fox, assistant planning director, city of Raleigh. “The new station will not only serve Amtrak passengers, but also act as a multimodal transit center connecting riders to other forms of transit. A recent countywide transportation referendum will boost the public transit service throughout Wake County. Raleigh Union Station will act as a vital hub in the middle of downtown.”

The North Carolina Department of Transportation (NCDOT) and the city of Raleigh have teamed to build the passenger train station at 510 W. Martin Street in downtown Raleigh, replacing the existing Amtrak station on Cabarrus Street. With four daily round-trip passenger trains, the Cabarrus Street station is among the busiest in the southeastern United States. In addition to being overcrowded, it lacks a platform large enough to serve the longer trains arriving at the station. Two more round-trip trains between Raleigh and Charlotte are planned to meet increasing demand.

The new train station is one of several improvements to the railroad corridor between Raleigh and Charlotte that will help increase railroad capacity, efficiency and safety. The project, however, didn't happen overnight.

“Multiple public agencies have been working on plans for a multimodal hub in Raleigh since 1989,” said Fox. “Many past plans and studies were not successful in garnering necessary support.

“The most recent effort began in 2009 as a joint effort between the NCDOT and the City of Raleigh. The feasibility study was made possible by a grant from the Federal Railroad Administration, and serves as the basis for the current plan.”

Money for Phase I is made possible through the United States Department of Transportation's program. The city's CMAR contract value will be almost $58 million of the total funding.

“United States Department of Transportation's Transportation Investment Generating Economic Recovery [USDOT TIGER] grants awarded in 2012 and 2013 made the project a reality by providing the bulk of the funding. The design consultant team was hired in late 2012 to begin master planning the site. Planning and design efforts were followed with a groundbreaking in May 2015.”

The project reuses an industrial building that's been vacant for more than a decade. The structure will provide more than nine thousand square feet of passenger areas. The concourse between the station and boarding platforms will be at grade with natural light, except for a short distance where it passes under one track and then up onto the center island platform.

The 920-ft.-long passenger platform will include a canopy to offer passengers protection from bad weather. The center island platform will allow them to board trains on either side, and will be level with the train doors, eliminating the need for steps or wheelchair lifts.

Fox said it's extremely satisfying to see Raleigh match the activity of private development with major investments in infrastructure, describing Raleigh Union Station as a catalyst for continued urban growth.

Station and track design began in 2013 and was completed in late 2014. The Raleigh City Council approved full funding for construction in March 2015, with construction getting underway in January 2016.

According to Kelly Ham, project engineer of Raleigh Union Station, “The construction site for Raleigh Union Station is in a railroad wye, or surrounded by railroad tracks. To accommodate this, grade-separated entrances were created to allow for proper access to the station. This site was chosen for the project because of its proximity to the rail, and the property was not likely to be developed otherwise.”

Construction includes site work, as well as bridge and terminal construction. To create the grade separated entrances, two bridges will be constructed. Trains will go over the bridges and vehicles entering or exiting the station will go under the bridges. Right now, the concourse, tunnel, and platform for the station is being completed.

Phase I of the work involves moving passenger rail services from the current Amtrak station on Cabarrus Street to Martin Street. It will include a bigger waiting room for passengers, commercial rental space, a center island passenger platform with level-boarding to provide better access for wheelchairs and strollers, an enclosed concourse between the station and platform, a public plaza near the intersection of West Street and Martin Street and event space during special events.

“The terminal building, which is an adaptive reuse of the existing building, will be constructed at the site of the former warehouse at 510 West Martin Street,” said Ham. “The steel from the former warehouse is being reused for the new station, and will be exposed and visible to offer a historic element to Raleigh Union Station. Also, panels and other components of the existing building, including gantry cranes, are being reused.”

The majority of excavation, foundation, utilities and retaining walls have been successfully completed. Over the next several months, construction will include completing the tunnel, platform, concourse, the station terminal building and public plaza. To date, weather has not been a significant factor.

“Hurricane Matthew occurred in October 2016, but the city and its contractors prepared in advance and took proactive measures to recover quickly from the event, so that the total impact was limited,” said Ham.

The project required selective demolition of the existing warehouse building to allow the adaptive reuse for the new station. A livery building located near the intersection of Martin Street and West Street was demolished. The project also includes completing significant grading, clearing portions of the site and removing old railroad tracks.

New sewer lines and a grease trap also will be installed. Erosion control measures are in accordance with the approved erosion control plan, including gravel construction entrance, silt fence, tree protection fence and other measures. The construction management team proactively washes trucks and equipment to prevent mud from entering streets outside the job site.

Approximately 70,000 net cu. yds. of cut will be moved during the project. A variety of heavy equipment and trucks are being used. Excavators and dump trucks have been required for excavation and hauling. Concrete mixers are needed for concrete for retaining walls, foundations, flatwork and other concrete tasks.

Pile driving equipment is utilized for installation of H piles for construction of retaining walls. A crane is on site for setting bridge girders, while man lifts are used for work at the building. Construction materials include, but are not limited to, concrete, asphalt, steel, brick, and glazing.

“The station terminal building, including the concourse, will be approximately 43,000 square feet,” said Ham. “It is a one-level facility with two mezzanines and will include space for office, retail and restaurant uses. It will also have a 'great hall' with an expanded waiting area for train passengers, as well as space for special events. A public plaza will be located near the intersection of West and Martin streets and will also be available for special events.”

Duke Energy is responsible for overhead power utilities and has made improvements to power distribution and transmission along West Street and in the project vicinity.

The platform construction consists primarily of concrete and steel. It will offer level boarding and a center island to improve access to the platform.

The originally proposed storm water garden has been modified to be a pollinator mound, which will allow for more room on site to accommodate soil export reduction. It also will include a variety of plantings to attract and support pollinator species.

“Sustainability funding supports permeable pavers in the parking area and a green roof on the concourse,” said Ham. “The green roof is a feature for the station that is both sustainable and aesthetic. Also, tactile wayfinding to meet the needs of visually impaired patrons is under design.”

The project will reportedly create more than 140 short-term jobs, generating more than $4 million in short-term salaries. It also has the potential to create a total of 44,500 short-term and indirect jobs over the next decade.

NCDOT is responsible for overseeing the design of all station and site improvements and construction oversight of the track and signal construction being performed by Norfolk Southern and CSXT.

“NCDOT is proud of its successful train station improvement program, which has been implemented statewide,” said Craig Newton, NCDOT Rail Division facilities engineer. “The largest of those projects in Greensboro totaled $23 million. Raleigh Union Station is greater than $100 million. With this significant investment comes significant expectation of improvements in ridership, but also in improved vitality in the downtown warehouse district, which, as a result of Raleigh Union Station, is now in extremely high demand for private investment and development.”

“The number of individuals who have worked innumerable hours is staggering,” said Newton. “That sustained effort will result in a dream realized. “Raleigh Union Station is intended to be a destination for citizens of Raleigh and tourists, in addition to train passengers. “

The Phase I project is made possible through a partnership that includes the Federal Railroad Administration, NCDOT Rail Division and GoTriangle. Substantial completion of the station is expected by the winter of 2017, with a fully operational station by the first quarter of 2018.