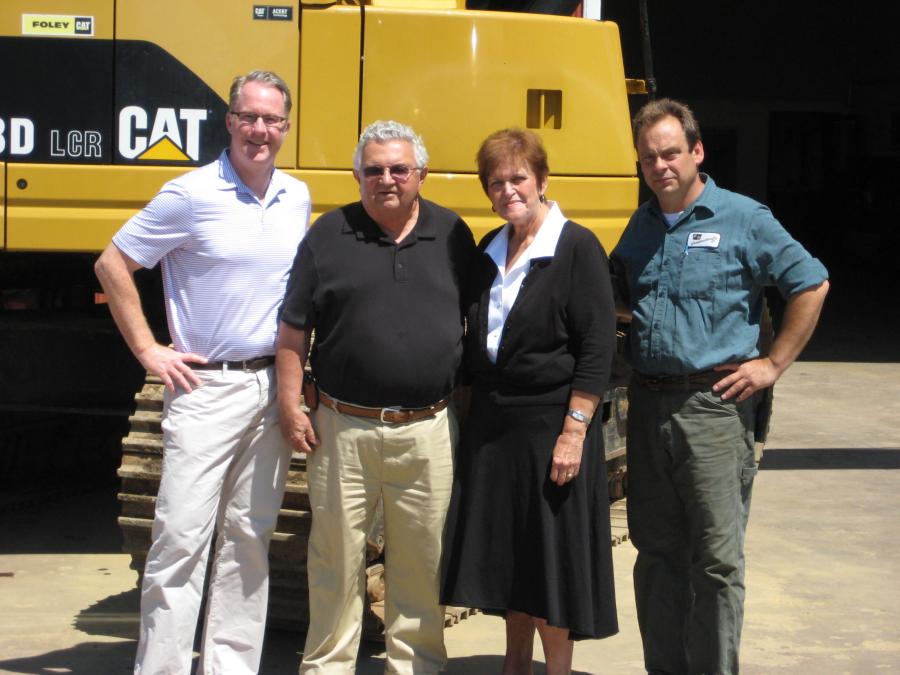 The business was founded in Chester, N.J., where Duryea Sr. and Jr. had already established a name for themselves in the construction business. "We were in the right spot at the right time," Russ Jr. said. "It's a good area, a growing area for residential construction, and we were known because we lived there, so people took a chance with us."

They started with a truck, a used backhoe and a small dozer. The only advertising they had was the high quality of their work. They still don't do much advertising, preferring to rely on word-of-mouth recommendations.

Their advertising strategy isn't the only aspect of the business that has changed little in 50 years. According to Rusty Fricke, the Duryea's son-in-law who helps direct operations at R&R, quality and service remain priorities. "We try to respond to the customer, even after the job is finished," he said. "Once we're done, we're not done. We've gone out to jobs even one year later to solve issues. We go the extra mile because we really do care about people. We're not trying to retire on one job."

Although everyone at R&R continues to put value on what they can do for their customers, Fricke said they are trying to figure out "the new normal." "Margins are very, very tight and competition is really tough; everyone's looking for work," he said. However, he adds, "We choose to walk away rather than take shortcuts. Quality still matters in our book. The jobs are much smaller and take just as much management to run. Small mistakes or delays add up quickly. Our employees have always done a great job of developing relationships with customers, inspectors, vendors and subcontractors and we put a value on that. It's just a little tougher selling this core value in today's market place."

Their commitment to quality, as well as to their customers and their work, has sustained them through 50 years of residential and commercial construction in a competitive market. Fricke, who comes from a very different background, considers R&R a unique company. "It's under the radar in many ways," he said. "What Russ and Marie have done for people in the industry is beyond what most people will ever know. They put in tremendous hard work and have earned great respect. They're great people: true old-school and old souls." Jamie Foley, president and CEO of Foley, Incorporated, adds that the Duryea's have been a large presence in the construction industry and with Foley. "We have been fortunate to have R&R as a customer," said Foley.

"When I think of the values that we live by here at Foley, R&R is a company that also exhibits those same values on a daily basis. It has been a business partnership that I truly believe has been beneficial for all parties — for Foley, for R&R and for Caterpillar." 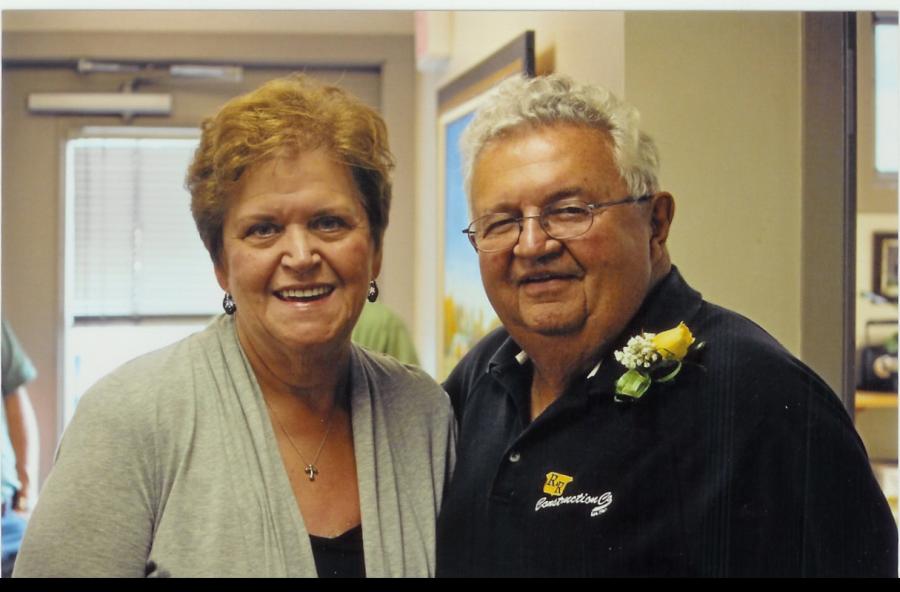 The only way to produce quality results is with experience, commitment and the right equipment. Russ Sr. had a background in construction and expertise as a mechanic for heavy construction equipment. Russ Jr. had a love for construction, running of the machine and designing whatever was needed, a talent that helped to move the company forward. If an unusual attachment was needed for a particular job, Russ Jr. and his crew built it in the shop.

The entire staff exhibits a strong work ethic. R&R's approximately 55 employees communicate with each other and the customer throughout a project, Fricke said, guiding the customer and trying to anticipate problems. "They [the office, field and shop personnel] are truly there to solve problems." Relationships are still an important part of doing business for R&R.

It all began in the early '60s, when they needed a bigger dozer, Russ reminisces. "We went to Foley and bought a used D69U tractor. Everybody wanted that machine back then. The engine was shot, but my dad and one of the guys rebuilt it." R&R has a full shop and weld shop, where they still do most of their own maintenance and fabricating.

As they grew, Russ says they purchased a 955H from Foley, Inc. It was far from their last purchase. "Now we have 35 to 40 Cat machines and mostly Cat engines in the big trucks," he said. One factor contributing to the growth of their Caterpillar inventory is Foley. "I can call Bill Grater at any time and he's always willing to try to help with creative ideas," Marie said. "Many times we use a lease-to purchase approach. Foley is also very helpful with creating a financial package through Caterpillar, which is why we use CAT Financial. They're always cooperative and fair."

Other reasons they continue to add to their Foley CAT inventory can be attributed to reliability and parts availability. "The Cat parts inventory is valuable," Russ said. Located only 20 to 25 mi. from Foley, he said they rarely have a lot of downtime. Limiting downtime is important for the customer.

Not only are parts readily available, but they also can get a backup machine while the original is being repaired. "You can never beat their parts systems," Russ adds. "There's a parts drop 10 miles away where we can pick up or they offer overnight delivery."

As Marie recalls, it stretches back 45 years, when they first met many of the Foley team, "some of whom became our closest friends," she notes — a relationship they still enjoy.

Foley returns the sentiment as R&R's Machinery Sales Equipment Consultant Bill Grater said, "Working with Russ, Marie, Rusty and the gang at R&R to solve their equipment needs has been a pure pleasure over the last 15 years. I have always considered Russ "the gentleman of the industry" due to his sincerity and honesty. We have developed a trust relationship where they have become more of a friend than a customer and I have taken advantage of Russ's vast knowledge of the construction industry." 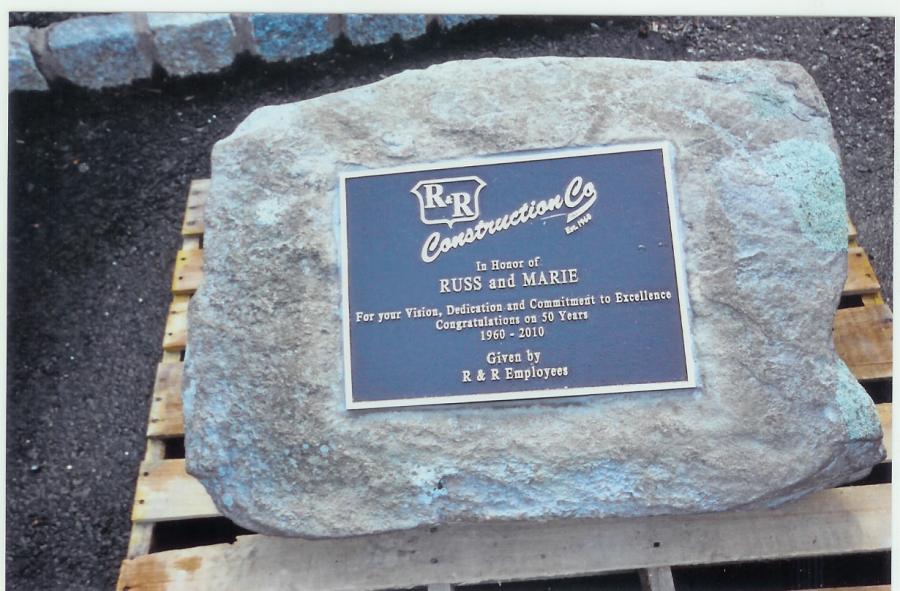 A plaque given by R & R employees commemorating the company's 50th anniversary.

Grater also remembers when he accompanied Russ and a few of his employees to the Caterpillar factory in Peoria, Ill., to see his actual D9R being assembled on the production line. Grater recollects, "Russ was so impressed by Foley and Cat's ability to time everything so perfectly and also the production the D9R gave them when it came to New Jersey." Foley's Customer Support Representative for R&R, Eric Cliff, adds, "I am looking forward to doing business with three generations of their family business just as they have enjoyed dealing with three generations of ours."

A friend is there when you need one, and Foley, Inc. has helped R&R through some tough jobs, like a major condo/townhouse project in New Jersey. "It was a big project," Russ says, "with eight to nine big buildings (with 50 residential units in each) and very rough terrain. Lots of rocks, blasting and deep utilities slowed us up. We crushed 300,000 to 400,000 tons of rock."

There were many challenges, Fricke interjects: terrain, soil erosion, rock, safety, earthmoving, 25-ft.-deep pipe runs, multiple changes to the plans. The job required many excavators, including a 385 rented from Foley. R&R also purchased a D9R to get the job done.

The job turned out well, Russ said proudly. "Jobs like that make a reputation. It showed people we could do large jobs — and it was fun for the guys. They enjoyed the challenge. But we couldn't have done it without equipment and service from Foley."

"We have always been blessed to have dedicated employees to support our customers' needs. We are also fortunate to have enjoyed a dedicated partner with Foley," Marie sums up.

This article was republished with permission from PayDirt Magazine, Summer 2011 Issue.