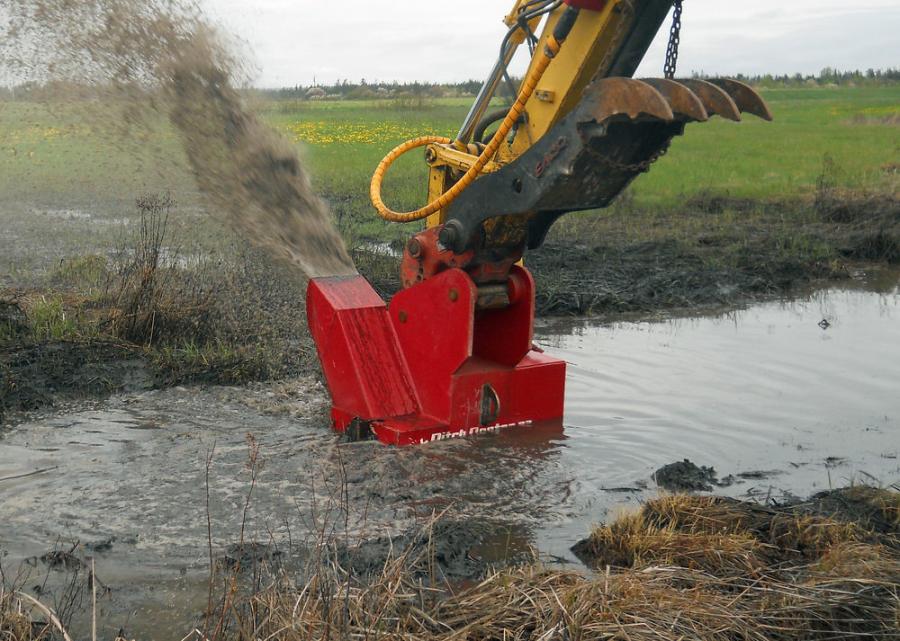 The Ditch Doctor chews up material with cutting heads, breaks it down and redistributes the spoils from a chute. The excavator operator has full control of the cutting depth and projection distance.

Ransome Attachments has been named the first and only distributor of Ditch Doctor Attachments in the United States. This unique hydraulic excavator attachment is designed for creating, restoring and maintaining infrastructure drainage ditches.

The Ditch Doctor is the product of a Canadian specialty excavating company that was looking for an alternative to ditching with the conventional excavator-mounted bucket method. Owner and inventor Adam Fisher — a second generation contractor — is no stranger to innovation. He built two other attachments for long reach excavators to dredge marinas, harbors and ponds before innovating the Ditch Doctor. 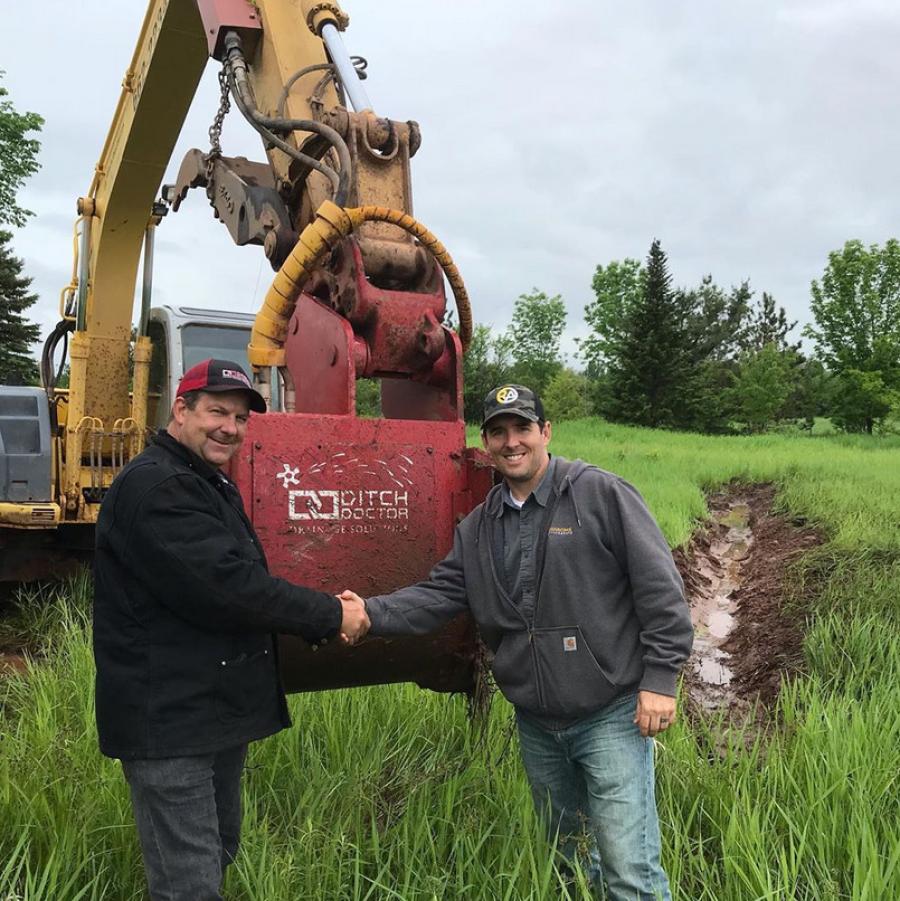 Fisher designed the Ditch Doctor to improve productivity and reduce operating costs in a more environmentally friendly way. It essentially chews up material with cutting heads, breaks it down and redistributes the spoils from a chute. The excavator operator has full control of the cutting depth and projection distance.

The Ditch Doctor reduces the time and costs associated with the conventional method. Instead of leaving a stockpile of dirt that must be hauled away or flattened with a bulldozer, it projects the material away from the ditch, allowing it to self-level.

The Ditch Doctor also is more environmentally friendly than the conventional bucket method because it creates a two-stage ditch, which allows the vegetation to remain on slopes and an upper shelf as the rotary head carves out a U-shaped ditch below, unlike the bucket method that removes all beneficial vegetation and allows for further erosion. The two-stage ditch reduces the velocity of water flow, retains beneficial nutrients, creates a wildlife habitat, prevents sediments from washing downstream and causing problems, and requires less maintenance. This also is beneficial on farms and sites with high-quality soil because it allows the material to remain on site. It is not uncommon to see vegetation growing from the redistributed spoils in as little as three weeks. The Ditch Doctor easily maintains buffer zones, which have been proven to reduce phosphates and nitrates into waterways.

"The Ditch Doctor improves productivity, reduces operating costs, and protects the environment at the same time," said Eric Ransome, owner of Ransome Attachments. "It's exciting to be able to bring that value to our customers across so many industries."

A detachable outer scroll case allows the Ditch Doctor to be used for dry ditching, but it also can work in up to 3 ft. of water. The company plans to add additional scroll cases that can be swapped for different work tools, allowing it to become a multi-functional attachment.

The Ditch Doctor can handle any material, including dirt, sand, sludge, vegetation, ice and even rocks. The attachment is designed to chatter upon hitting rock to notify the operator and can function as a bucket to move even the largest boulders from the ditch.

There are two Ditch Doctor models available, both of which are custom manufactured to fit specific makes and models of excavators from 5 to 22 tons. Both include a quick attach and can be hooked up within a minute. The attachment is manufactured in Canada and the assembly and shipping is done by Ditch Doctor in its Nova Scotia shop.

Ransome Attachments is the first and only American distributor of the Ditch Doctor.

"We know there's so much potential in the U.S.," said Carole Fisher, adding that they have fielded many inquiries in recent years. "Having a partner to be able to distribute it on our behalf is definitely a great success for us."