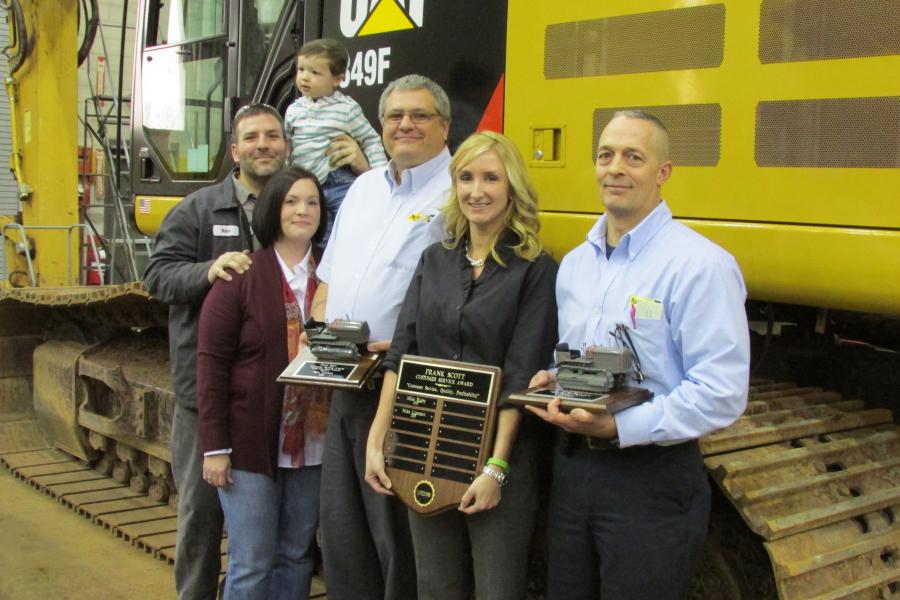 The new award, named to honor the memory of Frank I. Scott III, who was a dedicated Ransome CAT employee for 42 years, will be presented annually to a construction service department employee who has demonstrated exceptional dedication to Ransome CAT and to its customers.

“We were all saddened when Frank [Scott] passed away a couple of years ago, but we thought it would be perfect to have an award in his honor given annually to the person who demonstrated the top results in quality, profit and customer service,” said Kristin Bromley-Fitzgerald, Ransome CAT president.

Along with adherence to Ransome's vision, mission and core values, there are four areas that will be evaluated to determine the awarda recipient each year: customer relations, quality of work, profitability and leadership.

The winner (and in this case, two winners) receives a $1,000 cash prize and has his or her name engraved on a plaque that will be displayed in the construction service department. In addition, a smaller award will be given to the employee to display in his or her work area.

The nominees for the First Annual Frank Scott Award were:

Ransome CAT nominated a sixth candidate, who, while honored to be acknowledged for the award, asked to remain anonymous and that his name be withdrawn for consideration. While the company reluctantly agreed, it reiterated its gratitude for the employee's ongoing excellent contributions to Ransome CAT.

Deciding on a winner proved to be challenging: the company narrowed down the candidates to two equally qualified choices. Unable and unwilling to distinguish between the two, the decision was made to award two recipients with the Frank Scott Award — Mike Lineman and Mike Rigby.

“Frank Scott was a beacon of excellence for the Ransome construction service department for 42 years,” he said. “His legacy and impact on our company, employees and customers live on though all who knew him, every day. Whether as a technician, technical coordinator, supervisor or general manager, Frank was able to use his amazing wealth of knowledge and experience to mentor and lead our service team to success for both Ransome and our customers. That is the spirit of this award.”