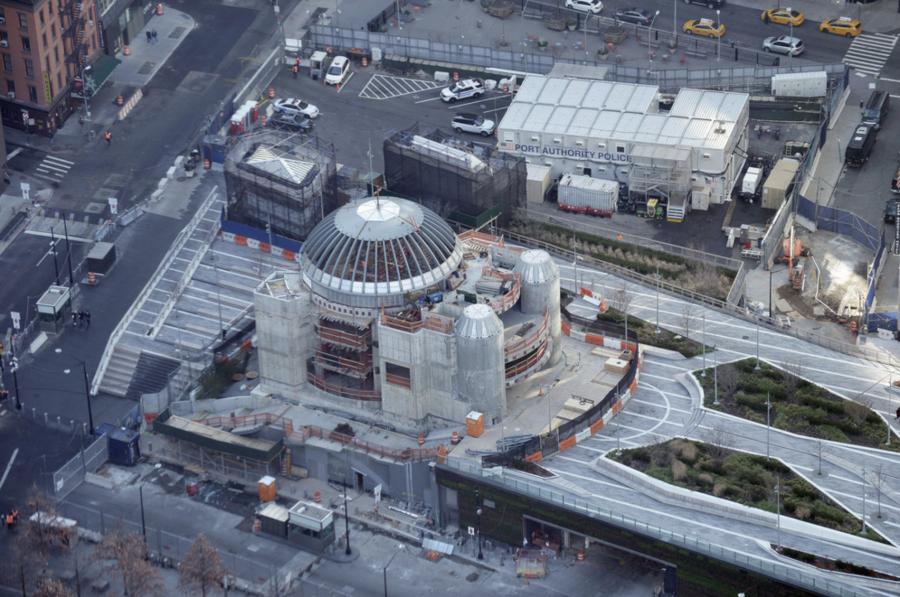 Maybe the most visible sign of unfinished work at the World Trade Center is the unfinished, concrete facade of the St. Nicholas Greek Orthodox Church, perched across the street from the southeast corner of the memorial plaza. (Harvey Barrison Creative Commons photo)

NEW YORK (AP) More than 18 years, the rubble left by the destruction of the World Trade Center has given way to a gleaming new complex of office towers, a museum, a transit hub and a memorial that draws millions of visitors each year. But though it no longer looks like a construction site, the rebuilding of the World Trade Center is still incomplete. Here's a look at four pieces of the complex that have yet to be finished.

Maybe the most visible sign of unfinished work at the World Trade Center is the unfinished, concrete facade of the St. Nicholas Greek Orthodox Church, perched across the street from the southeast corner of the memorial plaza. Construction on the church, which would replace a small chapel destroyed in the attacks, has been stalled since December 2017 due to financial problems. The unfinished structure has been wrapped in a protective covering ever since. Designed, like the transit hub, by the Spanish architect Santiago Calatrava, it is intended to become a shrine to the memory of those lost on Sept. 11, 2001, as well as a parish church. Originally budgeted at $20 million, the cost of the Byzantine-inspired church ballooned to $80 million. Greek Orthodox Archbishop Elpidophoros Lambriniadis, who was installed June 22 as the new head of the church in the United States, told The Associated Press he hoped to raise money to resume construction.

A planned performing arts center at the trade center site has long been delayed by disputes over funding and design but is now scheduled to open in 2021. The arts center will be at the northeastern corner of the site and will be called the Ronald O. Perelman Center for the Performing Arts. Perelman, a billionaire investor, donated $75 million to make the building happen. Barbra Streisand was named chairwoman of the center's board in 2016. The 138-ft., cube-shaped building will be covered with translucent marble.

Four commercial skyscrapers have been built so far to replace the office towers destroyed in the terror attacks. One World Trade Center, originally called the Freedom Tower, now anchors the northwest corner of the site, towering over 7 World Trade Center tucked just behind it. On the eastern side, two glass towers are complete: 4 World Trade Center and 3 World Trade Center. Yet to be built is 2 World Trade Center, just north of the white wings of the Oculus, the hall that houses a transit hub and shopping mall. Developer Larry Silverstein plans an 81-story building but has not secured an anchor tenant. The 2 World Trade Center space now houses mechanical equipment enclosed in a corrugated metal structure covered with graffiti art.

A tower south of the trade center site that housed offices for Deutsche Bank was damaged and contaminated by the Sept. 11 attacks and was later demolished. After years of wrangling by different government agencies over control of the parcel, a formal request for proposals to develop it was released over the summer by Democratic Gov. Andrew Cuomo. Developers can submit plans for either an office building up or a mixed-use project that includes housing.