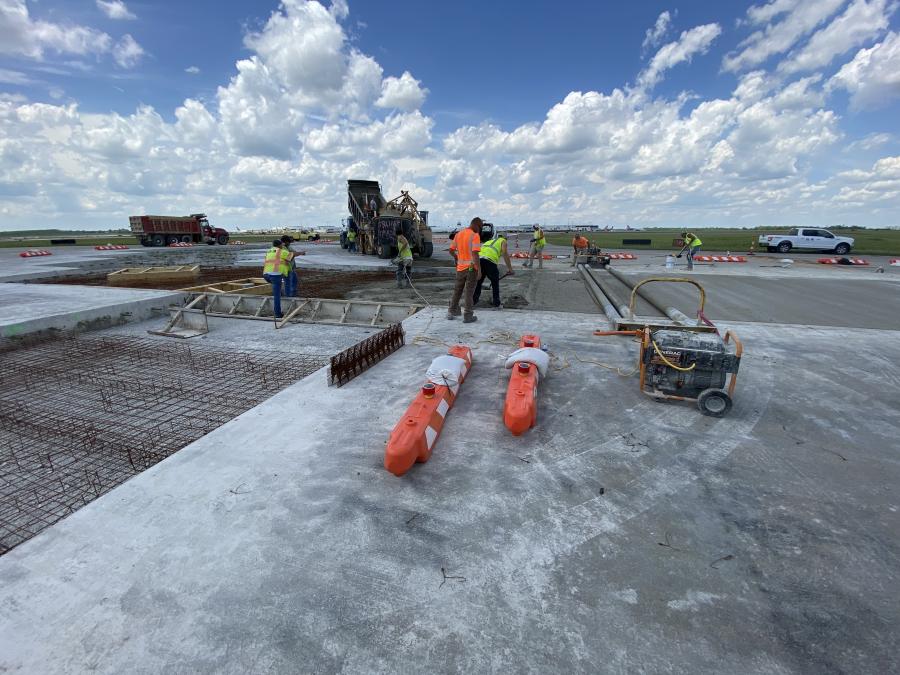 Cincinnati/Northern Kentucky International Airport (CVG) has seen a buzz of construction projects recently. The airport continues to make waves in the area with an annual economic impact of $6.8 billion. CVG welcomed more than nine million passengers in 2019. It is the seventh busiest cargo airport in North America. 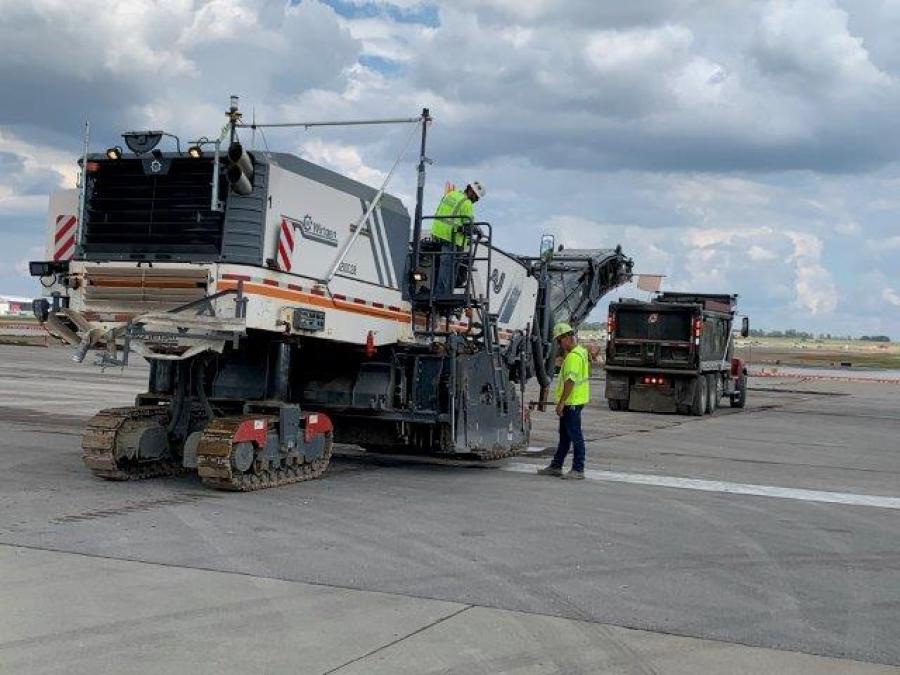 Airport planners and workers completed the rehabilitation of runway 9/27 last year with continuing work on adjacent taxiways in 2022. This runway is critical for cargo operations and is used extensively for nighttime operations. Due to impressive planning and execution, plus on-time availability of funding through the FAA, the fix was accomplished in one year rather than two. Runway 9/27 is one of four runways at CVG. Rehabilitation work included new asphalt, concrete and lighting.

"By completing the project in a single season, rather than two, it minimizes impact to nearby communities, cargo operations and the overall effectiveness at the airport," said Angel Ramos, vice president of planning and development.

The runway needed rehabilitation after some 30 years of service and bearing the brunt of many takeoffs and landing.

"The runway was concrete with an asphalt overlay," said Ramos. "Our team milled 6 inches of asphalt and removed 18-inch panels of concrete. We replaced the joints, P-501 concrete and P-401 asphalt, which is the standard required by the FAA."

The runway is heavily used for both passenger and cargo traffic. Cargo traffic grew during COVID. The airport handles cargo related to e-commerce activity, so planners found it necessary to make the runway active as soon as possible. That meant long days for workers.

"Our team had to work 24 hours a day for two weeks straight during September of last year," said Ramos. "At one section the runway intersects with another runway. So, our team had to get that section completed as quickly as possible."

Workers were able to crush the old runway materials on site and use them in the rebuild. That meant fewer truck trips to bring in new material. That also meant less carbon emissions and saved time.

Another time saver was the use of an oversize milling machine, capable of milling a 20-ft.-wide swath of pavement.

"If we mill faster, we can pave faster," said Ramos. "We were able to use a lot of activities to speed up the process."

Ramos sees lots of improvements in the new surface.

"The runway is smoother, with no cracks or bumps. And it's back to daily service."

A high-speed job like this requires excellent cooperation between the airport and contractors.

"One of the highlights for me was the chance to work with people who could problem solve and make things happen in a hurry," he said. "In construction there are always unexpected issues that come up. Our team reacted well and dealt with challenges in the right way."

The project came in at just under $70 million and included many savings through recycling. 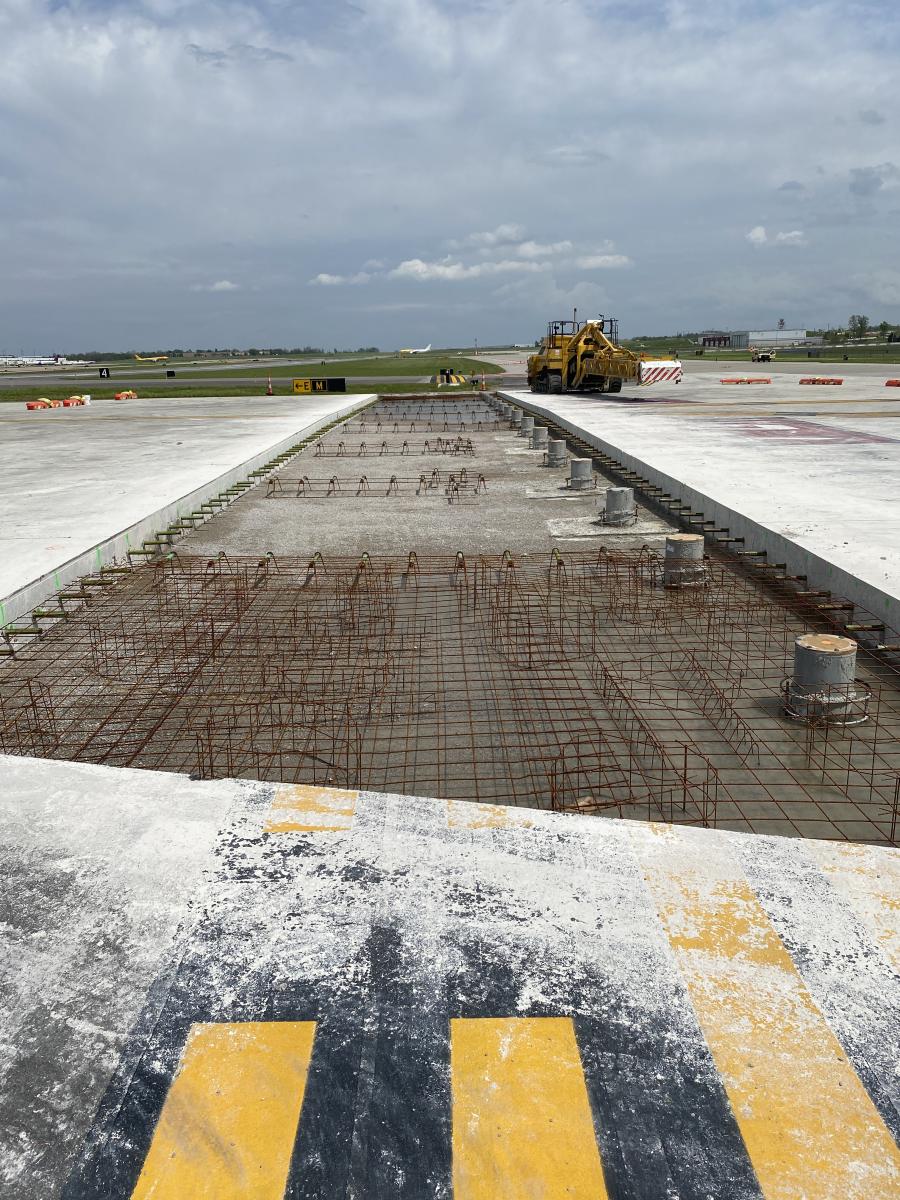 In addition to paving, the rehabilitation of the runway included installing more than 2,400 lights and nearly 200 illuminated signs. The lighting installation comprised fully one third of the project. The new LED lights are more energy efficient, producing 350 fewer metric tons of carbon dioxide per year. The LED lights have a life expectancy of approximately 10 years, rather than a few months with the former lights.

Samantha Kleem, vice president of operations at The Harper Company, highlighted the cooperation between her team and Eaton Asphalt, who performed half the milling and the asphalt paving. Bansal Construction was another key partner, handling the electrical installation.

"The level of coordination required in this project was intense," she said. "Sometimes one of us would complete a phase of the work and a partner would be on the runway within minutes. Frankly, we are all relieved to have met the deadlines. It was a great sense of accomplishment for our team, for the airport and for the engineering firms."

For 18 days, the construction teams were on the hot seat as they worked on an area where two runways intersected. Two of the four runways at CVG were out of commission.

"This timing was very important as we needed to get everything done by mid-October when the e-commerce activities start ramping up for cargo operations," said Kleem. "During that window of time our contractor had to mill and resurface all the asphalt paving, complete electrical and drainage operations. We also had to rebuild the shoulders. Not only did we have to get the work done, but we had to meet high quality standards for the material we were placing and for the compaction levels."

With the new runway all but complete, officials at CVG can tick off several jobs that will increase the airport's impact on passenger or freight needs in the area.

Last fall, CVG opened a new rental car and ground transportation center. The project cost $175 million to complete. The 1.5-million-sq.-ft. facility will encompass 2,700 parking spaces and will be used by 11 rental car companies.

"This facility is connected to the terminal and will save time for our travelers and enhance the CVG experience for the future," said Candace McGraw, CEO of CVG.

The continued expansion of cargo and e-commerce operations at CVG is highlighted by DHL and the Amazon Air Hub located at the airport. By the end of last year, Amazon's 600-acre facility was operating a dozen flights per day, including millions of packages every week. The Hub represents a $1.5 billion investment in the northern Kentucky region.

FEAM AERO is constructing a second hangar at CVG. The $40.2 million facility will encompass 150,000 sq. ft. of hangar and storage space. The facility will be able to accommodate wide-body aircraft types up to a 767 fully enclosed and have three parking spots. The project will be completed by the end of 2023.

"This new operation will provide ample aircraft maintenance capacity for CVG's growing cargo operations," said Fred Murphy, CEO of FEAM AERO. "This need for expansion confirms that we are in the right place, at the right time with the right partners." CEG