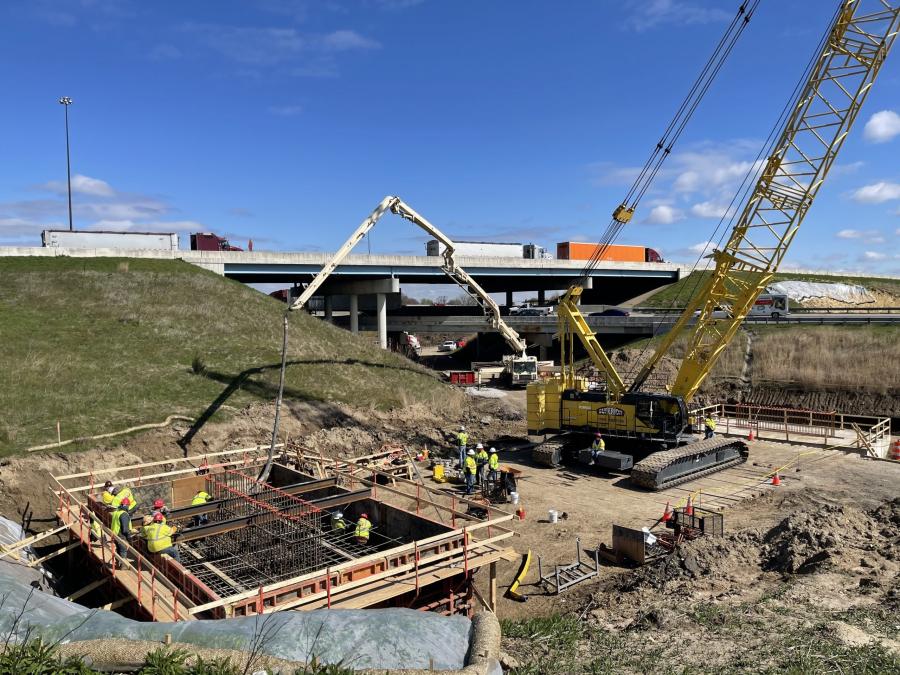 The North Split in downtown Indy closed on May 15 to allow crews to continue work on the $329 million project to rebuild bridges and roadways that are part of the state’s second-busiest interchange. (Indiana Department of Transportation photo)

In Indiana's capitol, May usually signifies fast cars at the Indianapolis 500, but this year, the month also focused on other kinds of traffic. The North Split in downtown Indy closed on May 15 to allow crews to continue work on the $329 million project to rebuild bridges and roadways that are part of the state's second-busiest interchange.

Portions of the North Split were built around 50 years ago. Substantial increases in traffic volume since then have it operating at full capacity just at the time that it nears the end of its useful life.

"The project started because of the condition of the roadway and bridges," said Jennifer Hashem, public information manager of Superior Construction, the general contractor on the project. "The interstates were constructed in the 1960s and ‘70s, and the infrastructure requires replacement. The pavement throughout the interchange is well beyond its lifespan and needs constant repair to remain safe and functional."

In addition, all 32 bridges in the project area have deteriorating components: 11 of them have only two to five years of remaining service life left. This project will replace all pavement within the project limits and repair or rebuild deteriorating bridges.

Not only is the infrastructure in poor condition, but due to approximately 214,000 vehicles traveling on the interchange daily, crash rates are higher there than the statewide averages for urban interstates. Peak travel hours often see stopped or slowed traffic. 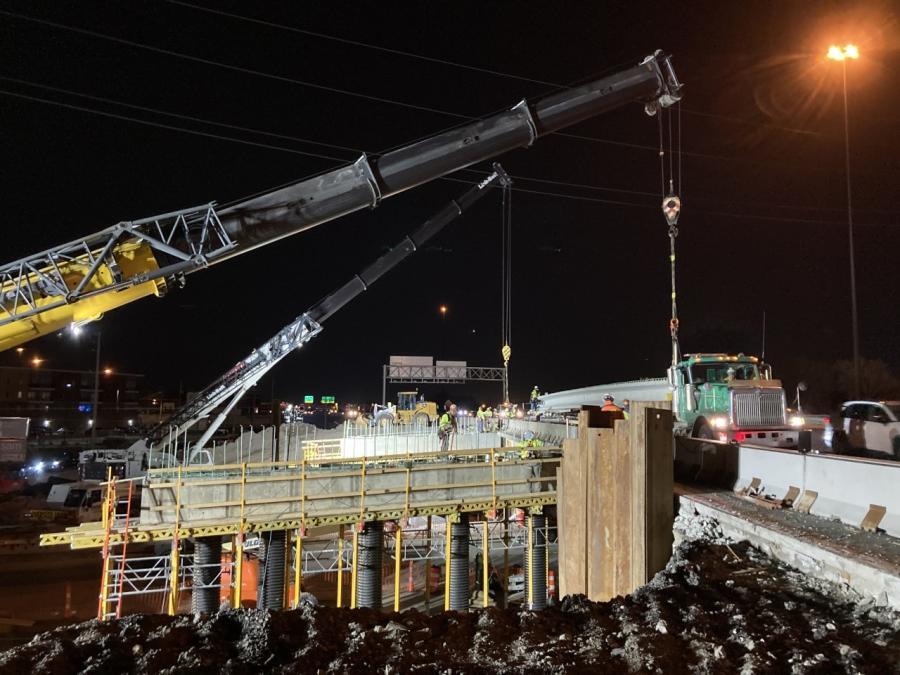 She blamed the frequent merges, weaves and lane changes over short distances within the interchange for increasing the potential for crashes. They cause driver confusion and disrupt traffic flow. A reconfigured interchange will address these safety concerns by providing fewer points of conflict and reducing congestion.

Typically, she pointed out, projects are planned and designed for 20 years after the construction timeframe in order to take into account projected future conditions.

The North Split Project is intended to rehabilitate, reconstruct and reconfigure the interchange to provide both safety and operational improvements. In addition to replacing all existing pavement, work includes replacing and/or reconfiguring entrance and exit ramps. Six bridges will be rehabilitated, while 43 existing bridges will be replaced with 44 new ones. Underpasses will receive wider sidewalks and underlighting to make the area safer and quieter. 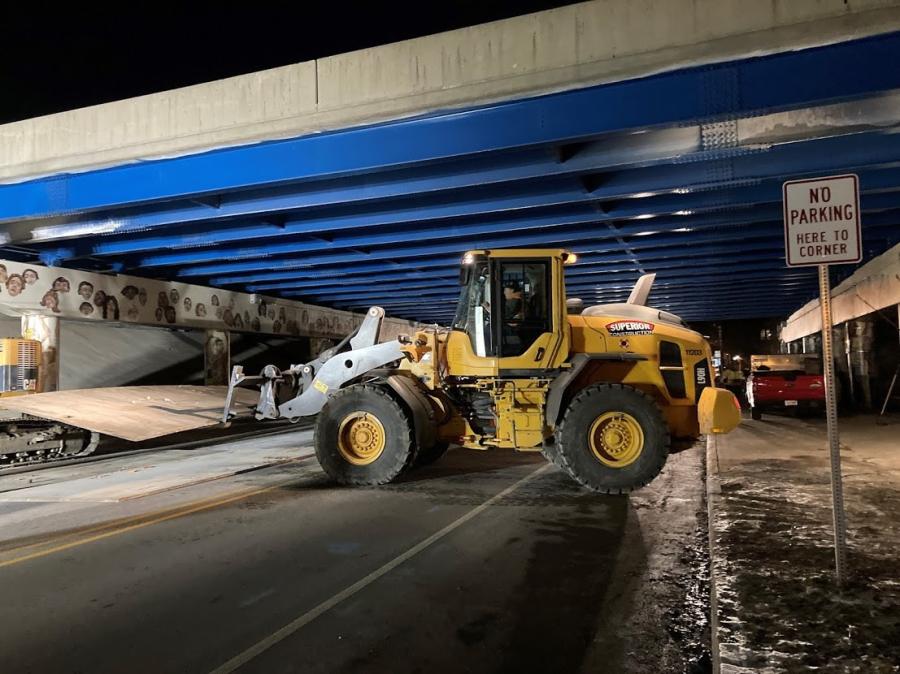 This is the first time a project has been planned that will completely reconstruct the interchange, bridges and pavement since the North Split was built in 1968. When work is completed, the interchange will have a smaller footprint, thus eliminating the need to acquire additional Right of Way.

"The project is to minimize interstate widening by not adding through lanes," said Hashem.

The limits of the proposed project are from the I-70 Valley Avenue bridge to the east, the I-65/I-70 and Washington Street interchange to the south (approximately 370 feet south of Washington Street) and the I-65 Alabama Street bridge (to Illinois Street along 11th and 12th Streets) to the west. The total work length of the project is 3.1 mi. and the total work area is approximately 185 acres. Within the reduced footprint of the interchange, crews will install landscaping, vegetation and landscaped side slope treatments.

To reduce the project's impact on adjacent historic neighborhoods, two ramps will be permanently closed. All I-70 traffic from the east will no longer have access to the Pennsylvania Street exit ramp and traffic on the Delaware Street entrance ramp will no longer have access to I-65 South or the collector-distributor road serving North, Michigan and Ohio streets and Fletcher Avenue.

To further benefit local neighborhoods, aesthetic design guidelines that were developed during the Context Sensitive Solutions public outreach process and an environmental study phase outline changes to local streets within the project area. One of its suggestions regarded wider sidewalks and underlighting for the underpasses to make them safer.

One of the most noticeable changes will be the elimination of what locals refer to as "the Big Weave." Currently, vehicles traveling on I-65 and I-70 must crisscross paths just after the South Split in order to stay on the same interstate when they reach the North Split. The crossing of two streams of traffic over a short distance is known as a traffic weave, which can contribute to congestion and crashes.

The curve will be easier to navigate than the current curve from the south leg to the east leg, which INDOT admits is "abrupt" and considers the cause of crash rates being twice as high as at other Indiana urban interstates.

Eliminating the Big Weave will improve safety and remove the worst of the bottlenecks in the interchange, without the need to add new through lanes. Closing the Pennsylvania Street exit ramp from westbound I-70 removes another weave.

Preliminary utility work began in the winter of 2020, with nighttime road closures during bridge demo. Due to the magnitude of the project, it will require two construction seasons, with most of the work taking place throughout 2021 and 2022. Over the course of the 18-month project, Hashem expects to see crews put in around 600,000 manhours.

"Since the majority of the project is being built on the same footprint as the existing interstate," Hashem explained, "this project will be executed in multiple construction phases."

Site prep will be done in phases, with movement closures. 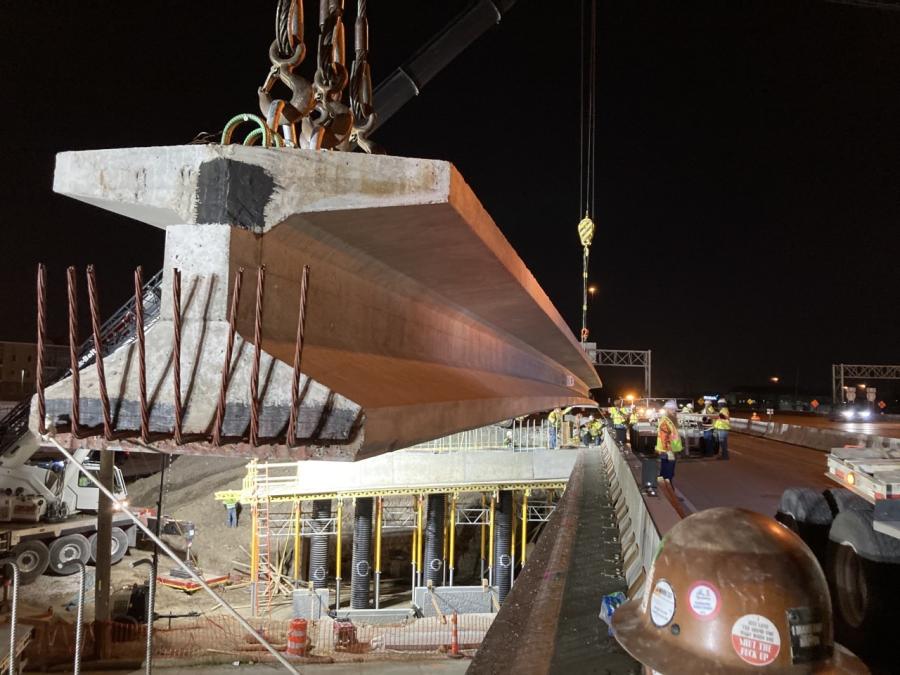 During the winter and spring, crews will work overnight (10 p.m. to 5 a.m.) whenever possible to reduce the impact to traffic. In the current phase of construction, the interstates through the North Split interchange are closed. Crews are working 24 hours a day.

Superior Construction is allowed to work up to a specified noise level until 11 p.m. During nighttime construction, INDOT construction crews will monitor noise levels at the site and create a noise "snapshot" the following morning. Based on those readings, adjustments are made to the type and timing of work to be performed. The project team will continue to monitor noise levels, make adjustments as needed and work to keep the levels at or below those allowed per contract.

Hashem said the biggest challenges for site prep are working in close proximity to the traveling public, ensuring that traffic movements remain open and working close to the historic neighborhoods in the downtown area.

While construction work in the early months of 2021 is outside the existing roadway area and causes little disruption to traffic patterns, the North Split will be closed for 18 months to block all traffic from I-65 and I-70 between the Split and Washington Street. INDOT also is scheduling shorter-term closures of surface-level streets while demolition and rebuilding of overpasses are taking place.

"This is an earthwork import job with more than half a million cubic yards of borrow," Hashem said. "Earthwork will be done by utilizing existing dirt from within the phases, as well as importing dirt from offsite borrow pits."

Grading will remain in its existing form, she said. To complete the full job, crews will use roughly 57,000 cu. yds. of concrete and approximately 63,000 tons of asphalt sourced from Irving Materials Incorporated (IMI).

For bridgework, 48 piers will be constructed. The biggest pier is Structure 34 inside of the interchange, which is 21 ft. wide and 40 ft. high.

"We'll be using all different kinds of equipment," Hashem said, "including, but not limited to loaders, dozers, excavators, cranes and dump trucks."

For paving work, they'll use:

Since Indianapolis is called the Crossroads of America, every day of roadway shutdown on this project means disruption to the traveling public across the nation. Hashem said trying to reduce the amount of movement closures was the biggest challenge — and the biggest accomplishment — of this project.