Reconstruction of I-75 Interchange to Improve Safety, Visibility 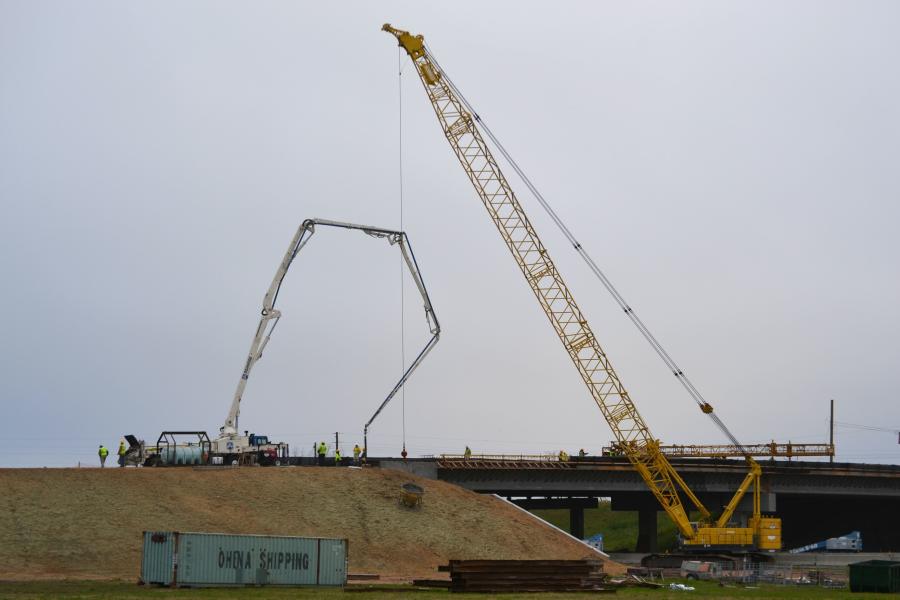 Work began last August on the Georgia Department of Transportation’s (GDOT) $49 million Reconstruction of I-75 Exits 29 and 22 in Lowndes County.

Work began last August on the Georgia Department of Transportation's (GDOT) $49 million Reconstruction of I-75 Exits 29 and 22 in Lowndes County. Reames and Son Construction Company Inc. (RSCC) has been executing a variety of road and bridge elements.

Reconstructing Exits 29 and 22 will improve traffic flow and capacity and improve visibility for drivers exiting the ramps, according to a GDOT press release. “\The bridges were built in 1960 and the design is outdated for current and projected traffic. [The] bridges will be widened to four lanes with turn lanes, paved shoulders and concrete medians. Northbound ramps at Exit 22, U.S. 41/SR 7/North Valdosta Road near Valdosta, will be reconstructed as a conventional diamond design. Southbound ramps will remain as is. At Exit 29, all ramps will be a conventional diamond design. The new bridges will be built adjacent to the existing overpasses, which will not close during the first phase of construction and until traffic can be moved onto part of the new overpasses.”

There has been a need for a rebuild for some time.

“It's a big bridge initiative and a tremendous investment on the part of GDOT,” said Tim Golden, who represents Georgia's 8th congressional district on the state transportation board. “These bridges were a major priority for me when I was first elected to the board. They are vital entry points to Hahira and Valdosta and I am extremely grateful to the many people at GDOT and throughout the community who helped make this happen.”

Exit 29 is the state Route 122/Main Street interchange at Hahira and Exit 22 is U.S. 41/SR 7/North Valdosta Road near Valdosta. According to GDOT, the existing bridges are narrow, which makes it difficult for motorists at the top of the ramps to see oncoming traffic. Both routes are two lanes and SR 122 doesn't have turn lanes. A short SR 7 westbound turn lane for traffic to go south on I-75 often backs up, which blocks through traffic.

“Traffic projections are estimated for a 20-year period and the design must accommodate that figure,” said GDOT's Nita Birmingham, district communications officer, southwest Georgia district office. “Staged construction and utility relocation pose the biggest challenges. They have to be resolved daily on a case-by-case basis.”

The design life for bridges designed with the AASHTO Bridge Standard Specifications is 50 years, according to GDOT's office of bridge design. However, this is more of a probability number for determining loads than actual service life of the bridge. With routine inspection and maintenance as provided by our GDOT Bridge Maintenance Unit and the moderate climate conditions of the state, Georgia bridges will typically have many more years of service life with many lasting for 75-plus years.

GDOT is doing all it can to minimize traffic impacts, but the outside shoulders between the entrance and exit ramps for Exit 29 is SR 122 at Hahira will remain closed for construction of the new overpass. Concrete barriers are on site, but are moved out to block the inside lanes only as needed — the lanes are not continually blocked as they are part of impacting I-75 traffic as little as possible 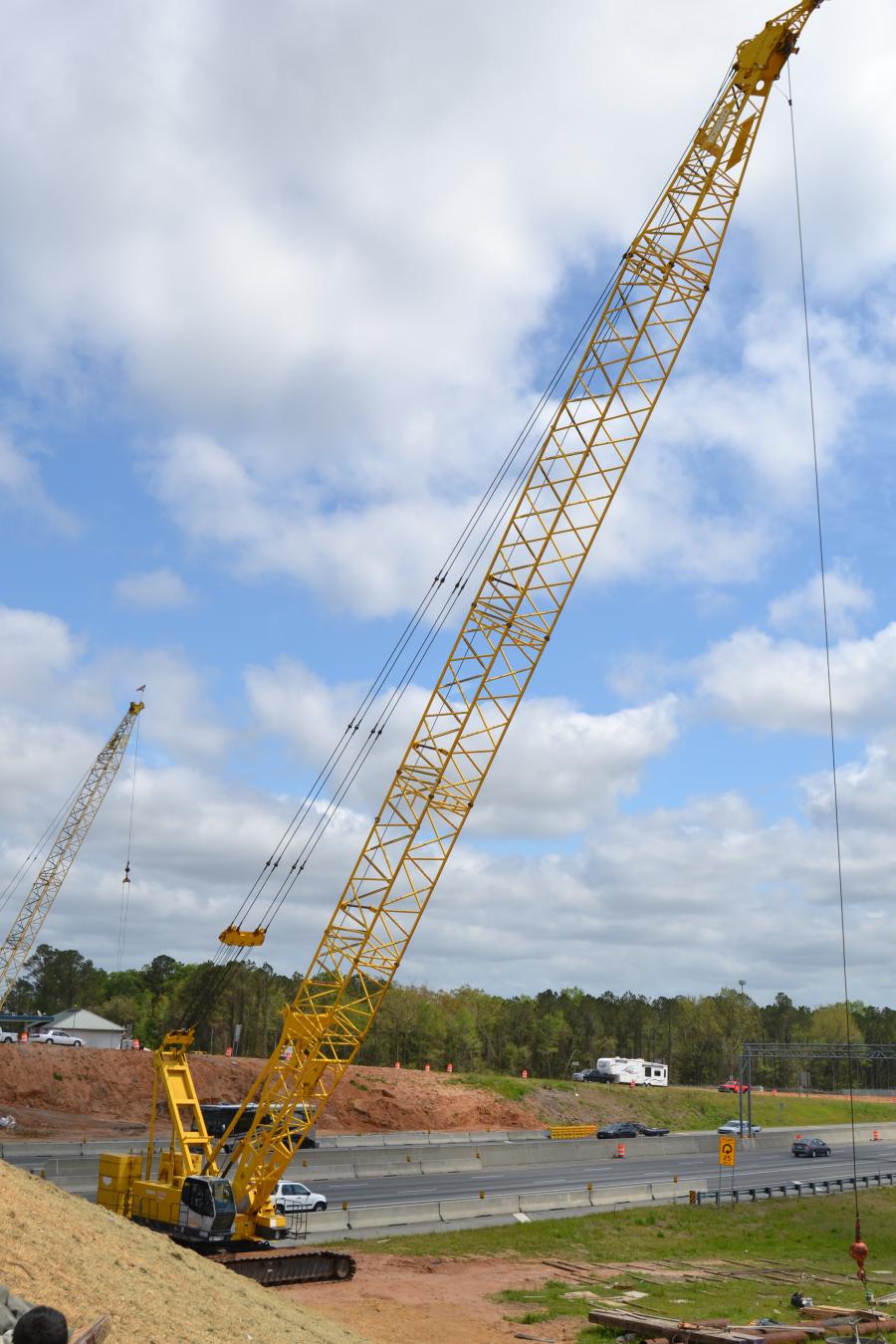 Reames and Son, so far, has completed the following elements of the project: mechanically stabilized earth wall at both sites; bridge beams set at both sites; and decks pours at both sites for two lanes of the new overpasses. The goals for the 2018 construction season are earthwork, bridges, stage construction and utility relocation.

In terms of the design, Reames and Son has suggested changes to the design that have been accepted, such as raising grades to match existing pavement to decrease full depth construction areas.

“The widening of the roads hasn't started yet,” said Birmingham. “Clearing and relocation of utilities is still being done. Overall, the biggest challenge is working on the project while the ramps and overpasses remain open to traffic. The bridge construction is ahead of schedule.”

On an average day, there are about 25 prime contractor and 35 subcontractor employees on site.

“Concrete barriers were initially installed at night to block off the inside northbound and southbound lanes as needed for construction,” said Birmingham. “The setting of bridge beams, which requires traffic pacing, has also been done at night to minimize the impact to I-75 traffic flow. The recent deck pour at Exit 22 over the northbound lanes started at 1 a.m. because the pump truck had to be parked in the outside/right northbound lane of I-75.”

On average there are about three GDOT personnel on-site, which is providing opportunities for newer GDOT employees to experience working on a large project.

The upgrading and replacement of aging infrastructure is a priority across the country and one that the Georgia Department of Transportation (GDOT) is taking seriously, particularly for smaller bridges in rural areas.

Last May, GDOT, when discussing the $49 million reconstruction of I-75 Exit 29 in Lowndes County, also referred to 16 other bridge replacement projects in southwest Georgia that were awarded within the past 12 months are scheduled to be advertised for bids.

Structurally deficient and/or functionally obsolete bridges on and off the state highway system are being replaced with structures that meet current Georgia DOT guidelines, according to a GDOT press release.

GDOT Transportation Commissioner Russell McMurry noted that many of these aging bridges are in rural areas and that replacing them is good for rural Georgia where farmers and agricultural-based industries need to move products to market. Some bridges being replaced have posted weight limits due to deterioration, with one that shut down by GDOT.

“Many of these bridges are not on the state route system,” said GDOT's Nita Birmingham, district communications officer, southwest Georgia district office. “Most local government entities do not have the resources to replace bridges on county roads. For fiscal year 2018, GDOT plans to invest $301 million in repairing and replacing bridges and $369 million in fiscal year 2019. GDOT inspects all bridges every two years and prioritizes repair and/or replacement based on need and funding.”

These projects are helpful to local contractors, who must be pre-qualified to bid on them.

“Most of our bridge projects and state route resurfacing projects are done by local contractors,” said Birmingham. “However, GDOT offers routine maintenance opportunities for smaller businesses. These contracts are for activities such as vegetation clearance, pavement preservation, guardrail repair, shoulder widening and short line striping. We do not resurface or repair city or county roads. That is the responsibility of the local governments, which can apply for a Local Maintenance Improvement Grant [LMIG] from GDOT to assist with their local road needs. Most of our district is considered rural. We currently have a number of maintenance resurfacing projects under way on state routes with many more coming.”

The pavement rehabilitation cycle for asphalt in Georgia is every 15 years.

“That is not a guarantee the road would be resurfaced during that time,” said Birmingham. “We have annual inspections of pavement and a roadway could be moved up or down on the schedule depending on its condition. GDOT does not widen city or county roads, only state routes. We currently have several state route widening/reconstruction projects under construction or coming up.

“The most significant of those is the widening/reconstruction of SR 133 from Valdosta to Albany, a total of 66 miles in Brooks, Colquitt, Worth and Dougherty counties,” she said. “This is broken into 10 separate projects; two have been completed, three are under construction and scheduled to be completed this year and the remainder haven't been let. The SR 133 corridor is in the Governor's Road Improvement Program (GRIP), a system of economic development highways that, when complete, will connect 95 percent of Georgia cities with populations of 2,500 or more to the Interstate Highway System. It will also place 98 percent of Georgia's population within 20 miles of a four-lane road.”

GDOT is spending close to $40 million in southwest Georgia on bridge replacements, which is providing work for many general contractors — large and small.

For more information on these projects, visit www.dot.ga.gov.