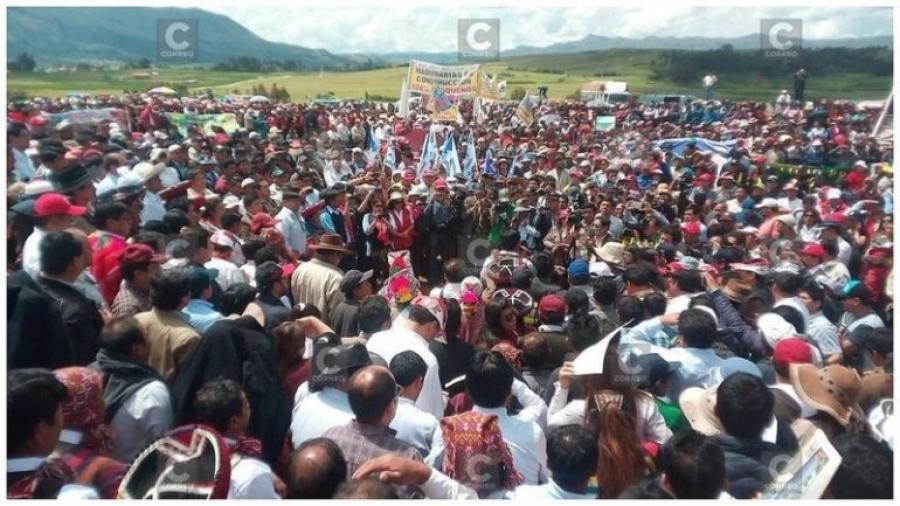 Residents in Peru's southern state of Cusco have threatened protests which could affect Machu Picchu tourism over the government's delay in starting construction of the Chinchero airport.

Peru's government under former President Ollanta Humala awarded the Kuntur Wasi consortium a $659 million contract in 2014 to build a new airport in the Chinchero district an hour outside Cusco, the former capital of the Inca Empire and launching point for tourists visiting the Machu Picchu ruins.

But construction which was set to begin today was delayed as the government wrangles with contractual technicalities and politics. President Pedro Pablo Kuczynski's government says it found risks to the state in the proposed financing of the $509-million airport, while its proposed solution has also come under fire.

“[We opted for an alternative] since the contract is detrimental [to the state] because it does not set a ceiling on interest rates, so [the contractor] wants to charge any interest rate,” transportation minister Martin Vizcarra told El Comercio. “So we have assumed the financing for the next five years … while construction progresses, and we will not pay the $589 million in interests, which is too much.”

Under the original contract, the state would guarantee financing for Kuntur Wasi to build a $500 million airport which would be paid back over 15 years. The consortium partners Andino Investment Holdings and Corporacion America, neither of which are a construction firm, will operate the airport for 40 years.

The government argues that since the contract did not cap interest, the rates obtained by the companies in the consortium could cost the government $1.12 billion, $590 million of which would be interest payments.

This month the government introduced an addendum to the contract which would shift the majority of the financial burden to the state. Finance minister Alfredo Thorne told a press conference that the poorly written contract required the project to be converted from a public-private partnership into a public work.

“Under the initial proposal the consortium takes out a loan which we finance, especially the interest, and the consortium would only use this money five years later,” Thorne said. “So we were financing five years of debt for absolutely nothing in return.”

But the government's proposed solution met criticism from the director of Peru's infrastructure regulator, Ositran. Patricia Benavente resigned after losing a vote to approve of the addendum, citing the state's increased financial responsibility in the project from 29% to 81%. She says that level of investment defeats the point of granting Kuntur Wasi operating rights for 40 years.

The government says that the state's financial burden was not significantly altered, only the timing of payments. It argues that frontloading its investment also incentivizes efficient design by the consortium, which will be responsible for maintenance costs over the life of the contract. They point out that they also increased the breach-of-contract penalty from $8 million to $80 million.

Despite approval from Peru's comptroller and Development Bank of America (CAF), the finalizing of the new contract was effectively stopped when the opposition-controlled Congress advised the government not to sign the addendum following media reports that a key executive in Andino Investment Holding, Ximena Zavala, is the sister of Cabinet chief Fernando Zavala.

Congressman Victor Garcia told El Comercio that the authors of the airport contract were the same officials who wrote up public contracts ultimately awarded to Brazilian firm, Odebrecht, which is embroiled in multimillion-dollar bribery scandals in Peru.

When news of the delay reached Cusco this morning, over 3,000 people marched in the Chinchero district where the airport is to be built. They say that President Kuczynski has three days to come to Cusco and begin construction on the airport or they will block roads and carry out protests in an indefinite strike.

Cusco's Alejandro Velasco Astete airport, located within the city of 400,000 people, is not large enough to accommodate the influx of tourists visiting the Machu Picchu ruins. An average of 4,460 daily tourists visited Machu Picchu from January through October 2016, an 11% increase from the same period in 2015, according to Peru's tourism ministry.

The new airport, slated to open in 2020, will be located an hour outside Cusco in the Chinchero district. The Chinchero airport will be Peru's second largest and able to accommodate international flights from Miami as well as other South American capitals. Currently international tourists much reach Cusco via the Lima's congested airport.

Protests have halted visitor traffic to Machu Picchu twice in the last two years. In October 2015, state government leaders and local unions blocked transit out of Cusco to demand the repeal of a law which would allow private companies to provide services at some of Peru's archaeological sites.

Last November residents of the Machupicchu district blocked the rail line which carries the vast majority of tourists to Machu Picchu to demand the train stop selling souvenirs and lunches to passengers, among other concessions.