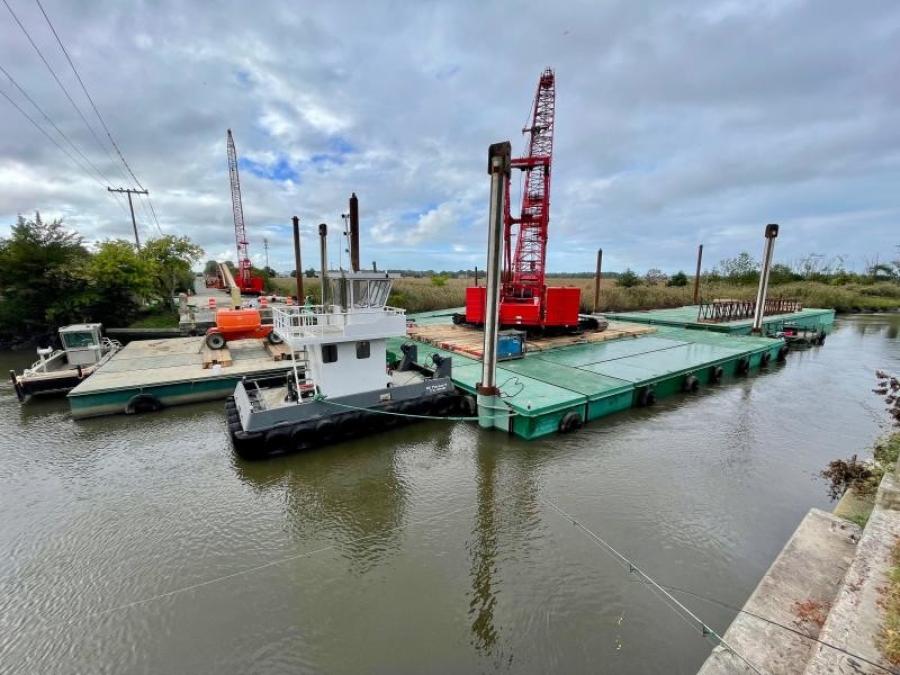 An $18 million project is under way that will see cranes, now looming over the river, dropping in 30 new, prefabricated sections of concrete deck and steel beams. (Dennis Forney photo)

On Oct. 4, the Delaware Department of Transportation (DelDOT) began piloting an $18 million rehabilitation of the weathered DE Highway 1 bridges over the Broadkill River east of Milton in Sussex County.

Pending the weather, DelDOT has planned the project to be completed by next spring.

The site is in the state's coastal region just a few miles west of Delaware Bay.

The old decks and beams of the historic crossing have deteriorated to the point of needing replacement, reported the Cape Gazette in Lewes, Del. The concrete is cracking on both the northbound and southbound bridges, and rust has plagued much of each span, according to the coastal Delaware news source.

According to DelDOT, the rehab effort involves replacing each of the existing concrete decks and barriers, putting new bearings in place, constructing new bearing pedestals, cleaning, and painting the steel members, repairing cracks and spalls in the concrete piers and abutments, restoring the pile jackets, and placing riprap for erosion protection. In addition, minor roadway approach reconstruction also will take place.

Prior to the start of the project, the contractor, R.E. Pierson Construction Co., from Pilesboro, N.J., had barges laden with cranes anchored to the Broadkill river bottom, putting them at the ready to begin the heavy lifting and lowering of 30 prefabricated sections of concrete deck and steel beams onto each set of supports for the new bridges.

DelDOT and R.E. Pierson are building the project one two-lane span at a time, with the southbound traffic bridge closed first. The dual-lane approaches to the bridges are being narrowed to single lanes so northbound and southbound traffic can be diverted onto the span not being worked on.

Bridges over the Broadkill at this location date back to the 1800s and possibly as early as the late 1700s, the Cape Gazette noted. To the north and east, the broad, salt meadows of the Great Marsh spread out toward Delaware Bay. The Broadkill meanders through the marshes before emptying into the bay at Roosevelt Inlet in nearby Lewes.

Fed by the streams and creeks rising out of central Sussex County, south and west of the crossing, the Broadkill's waters become fresher. The land also begins to rise, and the river's shores begin supporting more hardwood forests.

It is at this narrowing point, where the ground hardened and proved more supportive for a crossing than the soft marshes, that many varieties of bridges have been constructed over the course of three different centuries.

The Broadkill crossing also aligns with an ancient north-south byway used by coastal Native American communities around Lewes and the territories of a variety of tribes northward on the Delmarva Peninsula and above.

Today, the New Road bridge over Canary Creek near Lewes and the Broadkill bridge both provide the most natural access from the northerly coastal communities to inland Sussex communities.

Then as now, bridges are busy places and critical to efficient transportation, especially in a region of Delaware so pervasively defined by waterways large and small.