Rehab of Northampton 'Free Bridge' in Pennsylvania to Resume in 2021 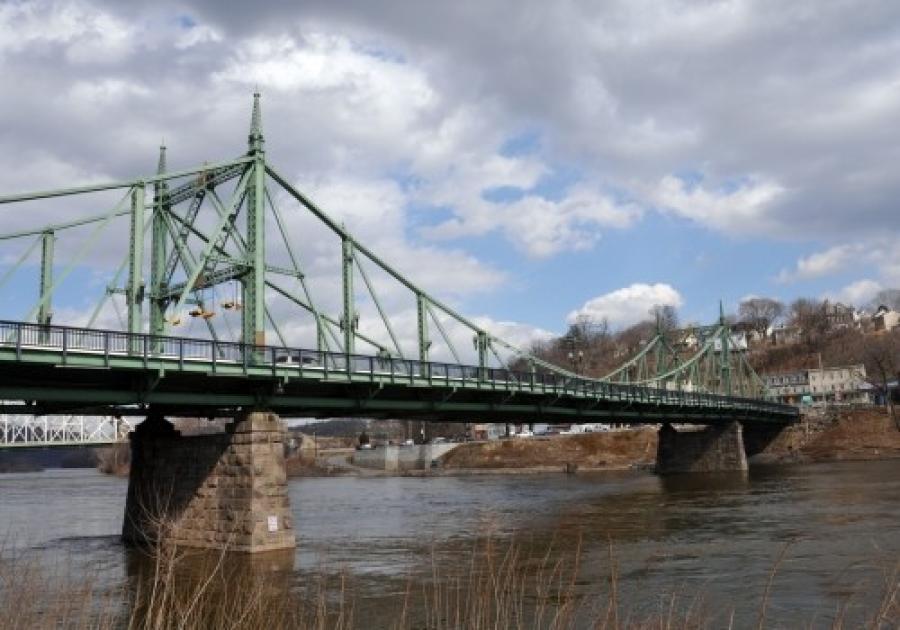 The Delaware River Joint Toll Bridge Commission (DRJTBC) said June 8 that it will start repairs later this year on the free bridge connecting Easton, Pa., and Phillipsburg, N.J., a project that was delayed several months due to COVID-19.

The bridge commission is preparing for a rehabilitation/improvement project at the agency's iconic Northampton Street Toll-Supported Bridge. Despite the name, the bridge is colloquially referred to as the "free bridge" to distinguish it from the Easton-Phillipsburg Toll Bridge a short distance upstream. The Northampton Street Bridge was last rehabilitated nearly 20 years ago.

The rehab of the 125-year-old bridge over the Delaware River should run into 2023, LehighValleyLive.com reported. It will include repairing steel eye-bars at the bridge's center that were reconstructed after a 1955 river flood and replacing the two deteriorating fiberglass walkways on the structure. A new coat of paint also will be applied, but plans call for retaining its iconic green color, referred to by the commission as "bridge green" or "antique bronze."

The project's core objective is to extend the Easton-Phillipsburg free bridge's useful life, according to the bridge commission's website, which it hopes will head off major repairs that could necessitate long bridge closures for at least 15 years.

Crews will work on the bridge, below the bridge and at the masonry abutments at both ends of the structure. The commission wants the construction activities staged so that traffic across the Easton-Phillipsburg free bridge is not impacted, such as preventing disruptions of Pennsylvania-bound travel that would force drivers to use the tolled crossings of the nearby Easton-Phillipsburg (U.S. Highway 22) Toll Bridge.

GPI/Greenman Pederson Inc., of Lebanon, N.J., is the engineering firm in charge of designing the multi-faceted project. When construction activities commence later in 2021, it will coincide with the 100th anniversary of the year the tolled crossing became toll-free after being acquired by the states of Pennsylvania and New Jersey.

The Easton-Phillipsburg free bridge is the most heavily used span of the DRJTBC's 12 non-toll bridges, according to the commission. In 2019, it carried a daily average of 16,900 vehicles across the Delaware River.

A wood-covered toll bridge was the first span at the site, opening on Oct. 14, 1806. It served the Easton-Phillipsburg area in eastern Pennsylvania and western New Jersey for 89 years until it was replaced by a span made of steel and wrought iron. That structure was completed in early 1896, according to the commission. The new bridge also charged tolls and would continue to do so for the next 25 years.

The privately tolled crossing became a "free" bridge shortly after the two states jointly purchased it on Aug. 2, 1921, from the former Easton Delaware Bridge Co. for $300,000.

The current bridge has been rehabilitated and repaired multiple times, most notably after the historic 1955 Hurricane Diane flood that destroyed its center span.

The DRJTBC is planning a virtual open house about the Easton-Phillipsburg free bridge rehab for 6:30 p.m. on June 22, that will include a presentation followed by a question-and-answer period for the public. The session will be held via Zoom and teleconferencing; the web address and phone number will be announced soon and posted on the commission's website at www.drjtbc.org.