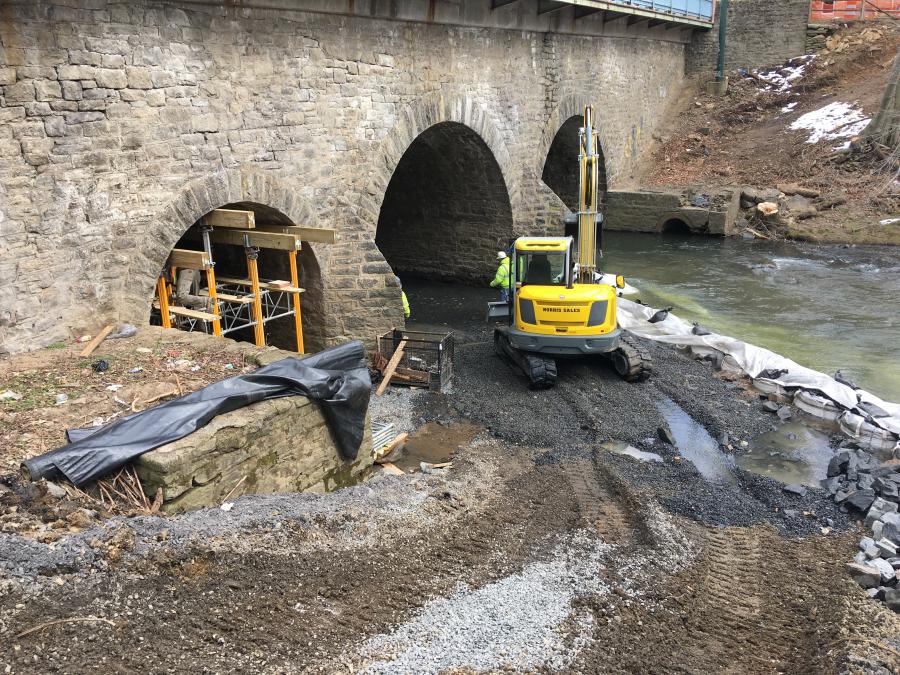 The Frankford Avenue project began on March 26 and will continue through the end of August at a cost of approximately $3.2 million. (Alex Craft of Loftus Construction Inc. photo)

The oldest bridge still in vehicular use in the United States is undergoing a rehabilitation to allow it to continue its work in the future. 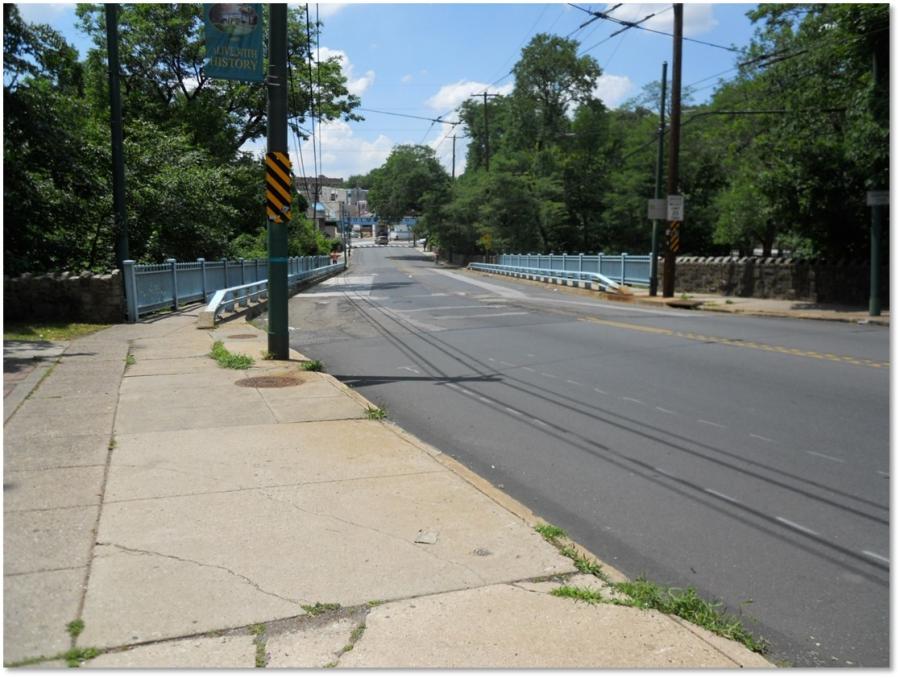 The U.S. 13 (Frankford Avenue) bridge runs over Pennypack Creek in Philadelphia, Pa. It is the first of seven structurally deficient Pennsylvania bridges to enter a rehabilitation phase through the Pennsylvania Department of Transportation (PennDOT). The Frankford Avenue bridge and two others in the project are listed on the National Register of Historic Places.

“This illustrates our effort to address structurally deficient bridges throughout the state — enhancing the strength, structural integrity, and longevity of these historic structures,” said Pennsylvania Gov. Tom Wolf. 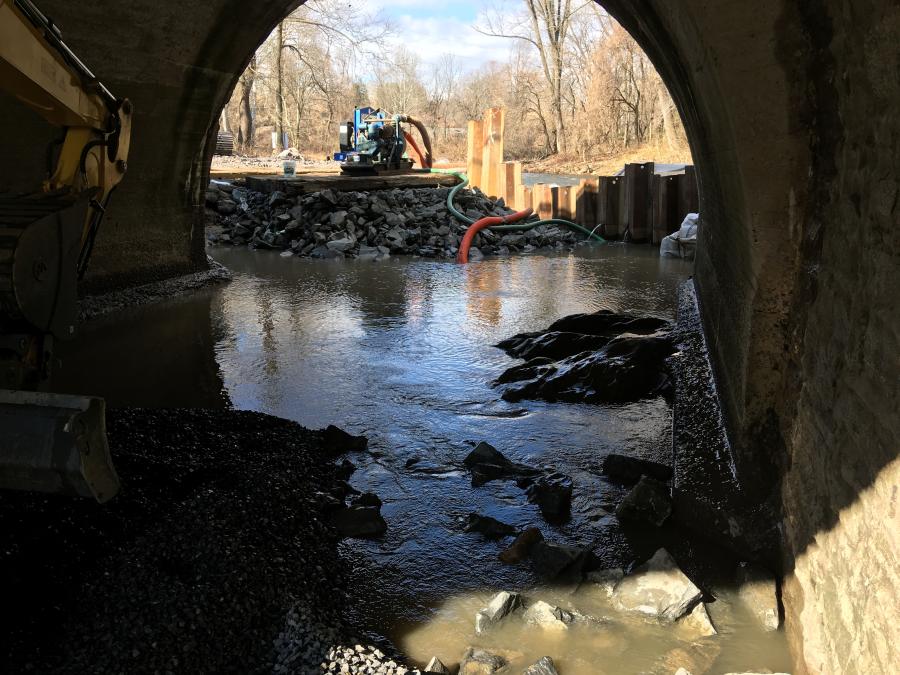 The Frankford Avenue project began on March 26 and will continue through the end of August at a cost of approximately $3.2 million. The overall contract for all seven bridges was awarded to Loftus Construction Inc., for $7,220,000. Financing is 80 percent federal and 20 percent state. Work on the overall project is expected to be completed in late 2019 or early 2020.

The Frankford Avenue Bridge was originally built in 1697. It was reconstructed in 1893, and is a three-span stone masonry and concrete closed spandrel arch structure. The 50-ft. wide structure is 73 ft. long and carries about 14,745 vehicles a day, including Southeastern Pennsylvania Transportation Authority's (SEPTA) Route 66 trolley.

“This project represents a proactive approach by PennDOT,” explained Bob Kent, community relations coordinator of PennDOT's Engineering District 6. “While assessing the bridge following the 2015 vehicular impact, PennDOT's bridge engineers saw other items that needed to be addressed. These types of bridges are very susceptible to freeze-thaw cycles, and the bulging in the north spandrel wall was getting to the point where corrective measures were needed. This work allows us to perform the work in a controlled fashion, so that we can remove the historic fabric carefully and accomplish the project.”

Kent reported that similar work has been successfully completed on 65 other masonry arch structures in PennDOT District 6 (Philadelphia, Bucks, Chester, Delaware and Montgomery counties); but none of those are this old.

Kent reported that the contract calls for the complete rehabilitation of the bridge. This includes the removal of existing pavement, sidewalks and earth fill; as well as relocation of the numerous utilities located within the fill.

“A utility bay will be created under a new concrete pavement constructed along the centerline of the bridge to house the majority of the utilities,” he said.

Existing stones will be removed and salvaged to create in-kind reconstruction of the north spandrel wall.

In addition, the contract calls for placement of a lightweight concrete fill material and the construction of partial width reinforced concrete moment slabs with integral concrete and steel traffic barriers (PA Type 10M barriers) that are similar in appearance to the existing traffic barriers.

Sidewalks will be rebuilt, and the existing pedestrian railings will be cleaned and painted brown.

A bituminous wearing surface will be placed and all masonry elements will be cleaned and repointed as required.

Scour protection measures (filling holes in the streambed) also will be performed, and a section of parapet wall that was damaged by a vehicular impact in 2015 will be rebuilt in-kind. 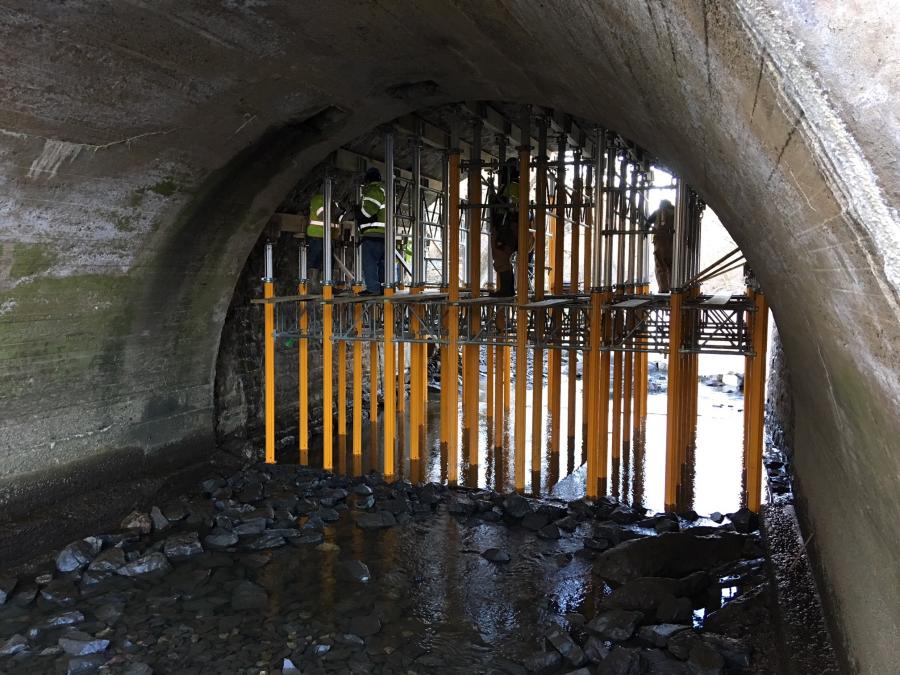 “The primary objective of the project is to reconstruct the portions of the masonry arch and spandrel walls that have exhibited various degrees of deterioration and failure,” explained Kevin J. Loftus, president and CEO of Loftus Construction Inc. “The enormity of reconstructing the oldest bridge in the country is by far the most unique feature of the project. The work will be completed using most of the existing stone and will replicate the existing appearance when finished. The fill over the arch will be replaced with lightweight concrete to further strengthen the arch. Ancillary work related to paving, SEPTA facilities and a variety of city and privately-owned utilities will be replaced and accommodated on the reconstructed structure.”

Loftus noted that the timeline required by PennDOT is ultra-aggressive and will require extended days, weekend work, and potentially come second shift work.

“The Pennypack Creek is volatile during storms and could impact the centering system installed to support the arch during reconstruction,” he said. “It is our experience on similar projects that structures of this type often require more extensive repairs than originally anticipated, thereby requiring substantial field engineering and cooperation between PennDOT and the contractor.”

According to Loftus, the road will be closed from March 26 to Aug. 28, barring unforeseen circumstances, and the work will be complete by late September.

Loftus explained that the Group T contract is for a total of seven bridges that spread throughout the Delaware Valley, and all will be completed by Loftus Construction.

“The bridges will be completed over a two-year time period and are comprised of masonry and concrete rehabilitation,” he said.

Loftus formed Loftus Construction Inc. in 1994, and the company is a heavy civil/bridge construction firm based in Cinnaminson, N.J., and working throughout the Delaware Valley and New Jersey.

“We count PennDOT, SEPTA, PA Turnpike Commission and various counties and municipalities amongst our public clients,” Loftus said. “We have done substantial negotiated work for the Navy at the Lakehurst Naval Air Station, now part of the Super Base. We also have completed both large and small structures projects for private clients like Toll Brothers and Brandywine Realty Trust, and several others.” 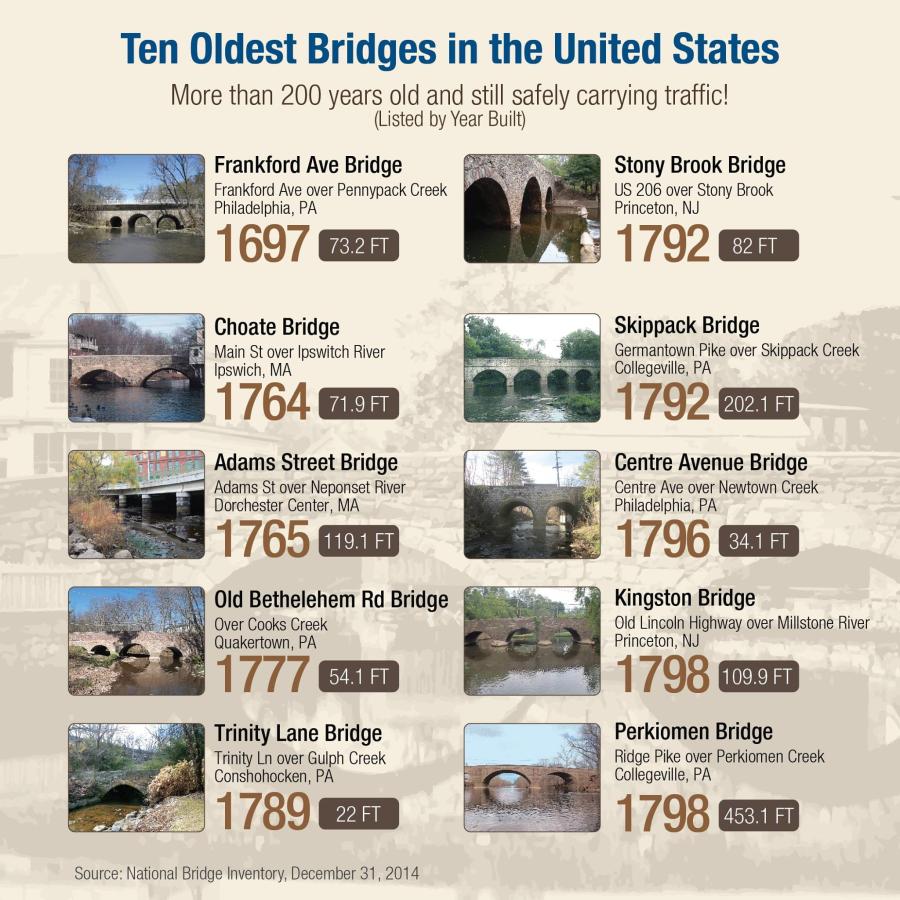