Remembering Our Past The Advent of the Modern-Day Skid Steer 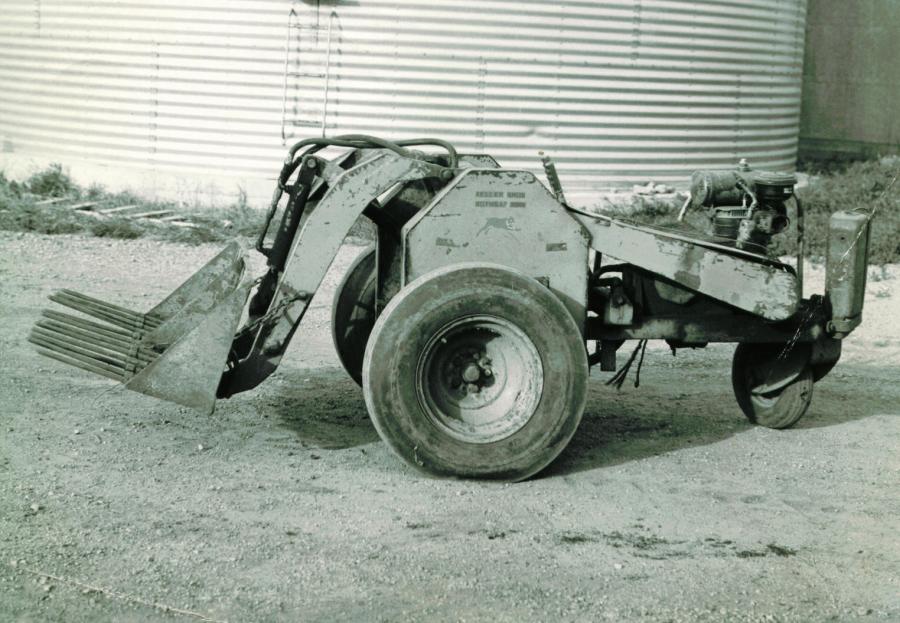 The original “Keller Self-Propelled Loader.” The belt-and-chain driven loader was a three-wheeled scooping machine powered by a 6.6-hp (4.9 kW) Kohler engine with the driver seated astraddle the controls just ahead of the motor.

In 1958, Louis Keller drove his truck into the barnyard of western Minnesota turkey farmer John Sonstegard. He entered the building where Sonstegard was working and told the farmer he had a machine outside that would efficiently clean his manure-laden barns. The farmer agreed to take a look at it. It was not love at first sight.

Keller's "toy" was the progenitor of the modern skid steer compact loader — specifically, the Bobcat loader. Keller and his brother, Cyril, had developed the machine two years earlier for another farmer and were shopping it around.

Sonstgard's dismissal obviously was not the end of the story. After the farmer strode back into his barn, Louis Keller didn't slink away. Showing the indefatigable belief that marked his inventive career, Keller turned to the farm foreman and offered to clean a barn for free. The man agreed and Keller returned some days later with his machine.

With Keller at the controls, the little loader scooped up manure and topped off five waiting trucks so swiftly that the truckers couldn't keep up with him. Finally, Sonstegard himself walked into the area where the loader was working and scolded Keller again, this time for not telling him how well the machine would do the job. He then ordered two loaders.

The story of the blacksmithing Keller brothers of Rothsay, Minn., has become a familiar one, about how they personally upended the construction machinery idea that bigger is better. The dimensions of their "toy" loader became the forerunner of a compact equipment market that still is expanding today. Tens of thousands of skid steer loaders are sold every year.

Turkey farmer Eddie Velo gave the Kellers the germ of the idea in 1956. He approached the brothers about building a small loading machine that could operate nimbly on a second floor. The Kellers accepted the challenge, agreeing to charge only for materials if they tried and failed.

The gamble paid off. The Keller's built the first machine in just six weeks and, in February 1957, Velo was invoiced for what was called the "Keller Self-Propelled Loader." The belt-and-chain driven loader was a three-wheeled scooping machine powered by a 6.6-hp (4.9 kW) Kohler engine with the driver seated astraddle the controls just ahead of the motor.

It rolled on two standard car tires situated right behind a 52-in.-wide bucket (132 cm), with a smaller, swiveling caster wheel at the rear end. The bucket was raised and lowered hydraulically using a pair of foot pedals. The nine-ft.-long (2.7 m) machine was steered using two levers operating the power-transfer belts. With one wheel rolling forward and the opposite wheel rolling backward, the loader pivoted in its own length.

"Everyone wanted a steering wheel," Cyril Keller said. "Other machines had hydraulic controls operated by your hands, but now your feet were doing it. It was totally new."

After building and selling a half-dozen loaders, the brothers knew they were on to something. Bankers and community leaders in Rothsay and nearby Fergus Falls weren't so sure. Neither community was willing to come up with $250,000 to set up a plant to build the Keller machine.

So, Anton Christianson, an uncle of the brothers, had another idea.

Christianson sold agriculture implements for Melroe Manufacturing, a company located in Gwinner, N.D., about 70 miles west of Rothsay. When one of four Melroe brothers, Les, visited the company's Elbow Lake, Minn., dealership where Christianson worked, Melroe was asked to drive to Rothsay and check out the patented loader. After seeing it demonstrated, Melroe invited the Kellers to display it at the Melroe exhibit at the 1958 Minnesota State Fair.

The brothers were asked to develop an improved "Melroe" loader and were assigned three employees to help fabricate parts. After the first six loaders were built, Louis Keller settled in to oversee continuing development and Cyril hit the road selling them.

"They asked me to go across Iowa and see what I could do, so I did and sold four machines," Cyril said. The company sold 25 Melroe loaders the first year and, more importantly, placed the loader in dealerships across the region.

The Keller's collected and shared a $15 royalty from each machine sold, a formula that remained unchanged over the years even as the sales price of the skid steer loaders climbed.

As the loader grew in popularity, market forces began to shape the machine. Cyril reported back to his brother at the factory that the rear caster wheel's inability to handle soft earth was a recurring problem. After the two brothers talked through the matter, Louis began to tinker in earnest. His solution was to get rid of the caster wheel and put an additional drive wheel on each side of the main housing.

Because all four wheels were fixed, however, turning the machine was an engineering challenge. "Louie kind of figured that out," Cyril said.

First joining the wheels on each side by chains and controlling them through the patented clutch system, Louis then determined through trial and error that a 70-30 weight distribution would let the front or rear set of wheels skid sideways in a turn. A loaded bucket lightened the rear wheels, an empty bucket lightened the front wheels. This weight shift allowed the loader to pivot.

Several years before he and Cyril tackled the self-propelled loader, Louis built and sold the first tractor-mounted ribbon auger snow blower and then the first walk-behind snow blower.

"Everything he worked on, he learned from," said Louis Keller's son, Joe. "He was always quick to see when something wouldn't work. He would tell people, 'I am just as confident that it will work as you are that it won't work."

Firmly believing that a machine that lacked steerable wheels could somehow be turned, Louis Keller gave birth to the skid-steering system. With nothing else like it in the market, the Melroe compact loader was set loose to corner the market as an extremely nimble machine of tremendous utility.

Cyril Keller retired in 1984. He stepped back some 15 years after Louis, who left the company only to pursue another project. He wanted to build a smaller loader — a "mini-Bob" — that would fit through three-foot entranceways. Bobcat executives weren't interested, so Louis set up his own shop at home and methodically downsized the skid steer.

As the idea came together, the company got interested. In 1971, Bobcat sent the prototype and a larger model to a dealership convention in Phoenix, Ariz. In two days, the mini-Bob, later dubbed the M371, attracted 950 dealer orders. It ultimately stayed in production longer than the other exhibited machine.

Louis designed numerous attachments for the skid steer. He also introduced tracks to give the loaders additional traction. Because Bobcat again showed little interest, Louis turned to his daughter Marilyn and her husband, George Loegering. The couple geared up and manufactured the Loegering Tire Crawler Track, which spawned the industry's compact track loader segment.

Louis' well of innovation never went dry. When he died four years ago, Louis Keller had sketches of ideas he hadn't gotten around to fully developing, Joe Keller says.

The skid steer story has earned the Keller brothers official state and industry recognition in Minnesota, North Dakota, and California. Some of their papers are in the Smithsonian Institution. The American Society of Agriculture Engineering honored them with its "Historic Landmark" award, an honor only periodically given out. Fortune Magazine saluted the pair by naming the skid steer loader one of the 100 best American-made products in the world.

Just three years ago, a woman paid a particularly bright tribute to the skid steer loader. Cyril Keller told with relish how the woman reacted when her betrothed showed her a diamond engagement ring. "I would rather have a Bobcat, " she announced. She told her (probably stunned) future husband that she had learned to drive a skid steer at age nine and the machine still held a special place in her heart. Of such testimonies are legends made.