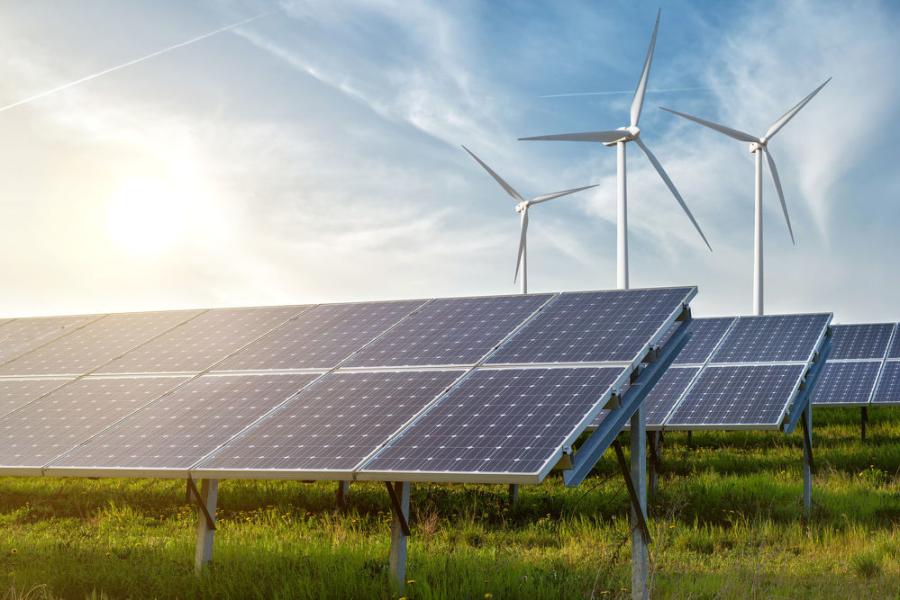 Renewable energy ventures create jobs and boost the local economy. In rural Colorado, more than 6,300 jobs have resulted from renewable energy projects since 2000. They’ve generating almost $400 million a year in economic activity for the eastern part of the state.

As American Wind Week 2020 kicked off with a tribute to the wind industry workforce the week of Aug. 9, the outlook for the renewable energy sector as a whole is strong. A multitude of both wind and solar projects as well as retooling plans launched this summer across the country have buoyed the heavy machinery industry, creating both temporary and ongoing construction jobs.

Total construction starts increased 6 percent in June, according to the Dodge Index, marking the second consecutive monthly gain in starts following the COVID-19-induced declines in March and April. In fact, utility/gas plants moved 108 percent higher in the month as more than $2 billion in renewable power projects were launched.

With these projects, New York's will advance its goal to obtain 70 percent of its electricity from renewable sources by the year 2030. The projects translate into more than 2,000 short- and long-term jobs and increases in local tax payments.

Once the projects are completed, New York's carbon emissions should equate to 300,000 fewer cars on the road.

On the West Coast, the $600 million Golden Hills Wind Project in Sherman County, Ore., got off the ground, as did the $438 million Athos I solar facility in Desert Center, Calif.

With jobs to fill, the renewables sector is attracting workers from other markets. Unpredictable ups and downs — and the fast crash this year due to the COVID-19 pandemic — have driven many career employees from the fossil fuel and oil and gas markets toward jobs in wind and solar.

Jobs creation and an energized local economy are two of the points that sell renewable energy projects. In rural Colorado, more than 6,300 jobs have resulted from renewable energy ventures since the year 2000, generating almost $400 million a year in economic activity for the eastern part of the state.

A study from Denver, Colo.-based environmental group The Western Way shows that 40 projects, including seven in development or under construction, are set for completion by 2024. By year's end, nearly 5,000 megawatts of power will have been generated, and another 1,100 megawatts will be added as projects are completed during the next four years.

The study noted that the economic impact of renewable energy project construction in the region totals nearly $6 billion. Plus, it's generated close to 13,000 jobs from both construction workers and the dollars they spend.

New York State will be the site of a large-scale solar project in Chautauqua County, that will include a 20 megawatt battery energy component. Renewal Energy Developer ConnectGen predicts the South Ripley Solar Project will create about 600 jobs during peak construction and 220 full-time equivalent jobs.

The project will contribute a meaningful amount of renewable energy toward the state's identified clean energy supply goal of 70 percent of electricity generated by 2030. It should supply enough electricity to power approximately 60,000 average homes in New York annually.

Under a plan to install 30 million solar panels in Florida by the year 2030, five solar projects recently launched in the northeastern part of the state. Approximately 200 jobs are anticipated with the newest project, in St. Johns County, according to Florida Power & Light.

Baker, Clay, Nassau and Union counties are home to other solar farms under construction, expected to add 500 permanent jobs to the area. Some 1,200 workers will be needed to fill jobs at the peak of construction.

In Kentucky, a 50-megawatt solar park is to be constructed in the western region of the Bluegrass State. U.S. developer Community Energy reports it signed a 20-year power purchase agreement with Henderson Municipal Power & Light.

The park will generate 117 million kWh annually once it's completely online, in 2023. Community Energy announced in May a similar agreement with Big Rivers Electric Corporation for 100 megawatts of solar parks in the state.

Minnesota Power is investing $40 million into three solar projects with a goal of tripling its solar portfolio through the addition of 20 megawatts of renewable energy.

Daily Energy Insider reports that if the Minnesota Public Utilities Commission gives the project the nod, the three facilities will be located in the northern part of the state. Drawing from existing electrical infrastructure, they'll begin construction next year.

Blowing in the Wind

The Energy Information Administration (EIA) reports that utility-scale solar generating units are predicted to grow by 17 percent in 2020. Wind generation is close behind, and should see a 14 percent growth spurt this year. Both on- and offshore wind farms are more visible than ever now.

In the Montana Rail Link Yard in Laurel, Mont., the towers for PacificCorp's Pryor Mountain Wind project sit, waiting for delivery to the job site. Arriving by train, the towers will wind up in Bridger, Mont., on a large wind farm installation project there. Spencer Hall of PacifiCorp reported that four structures were being put up earlier this month.

"I think there's going to be 10 in the next week or two," Hall said in an interview with the Billings Gazzette. "Folks in the area can expect see a lot of trucks going by." 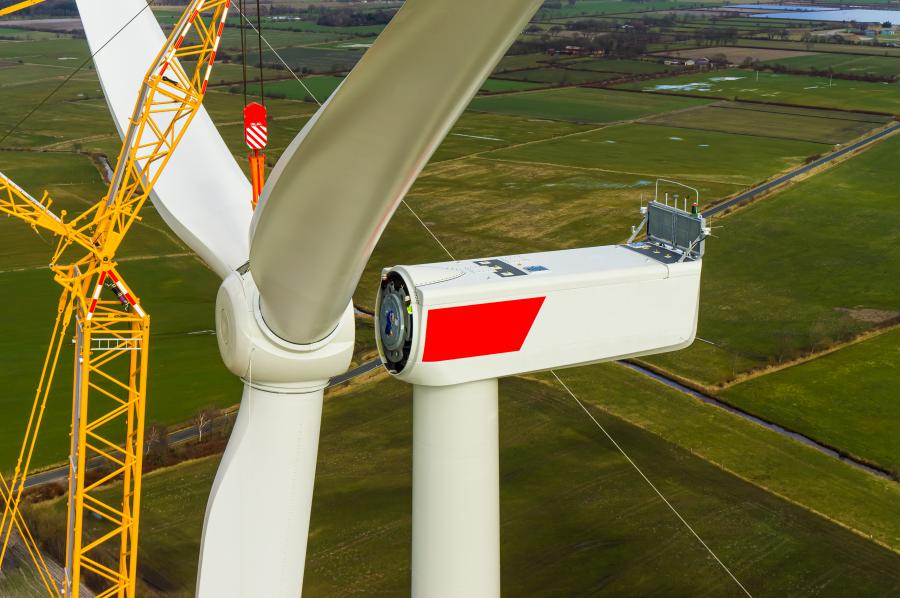 At its peak, the project will see 300 workers on the 114-turbine farm site. Some 240 megawatts of capacity is the goal for what will be the largest wind farm in Montana, providing renewable energy for out-of-state customers.

Specialized flatcars were designed to transport the lengthy turbine blades and other components.

Construction equipment is carried to the railyard by truck, and a crane will load the parts onto trucks for transport to Bridger.

Mortenson Construction of Minneapolis is the project's general contractor. The company will oversee public road improvements and creation of access roads to each turbine site, as well as foundations, underground collection, substation, operations and maintenance building and towers.

"We are delighted to be working with PacifiCorp to construct our fifth wind project in the Big Sky State, which will increase the state's wind energy portfolio by 30 percent," said Tim Maag, vice president and general manager of Mortenson's wind energy team. "Montana has great potential for wind energy and manufacturing, as it is known to be one of the U.S.'s windiest states."

Once it's online, Pryor Mountain Wind will increase energy by 30 percent and generate enough power for 76,000 homes.

Clean energy storage is trending in the renewable energy construction sector. Electrical energy can be stored when electricity is plentiful and inexpensive or when demand is low. The energy can then be returned to the grid when demand and prices go up.

As prime contractor, Catamount is responsible for site work and construction of the infrastructure, power distribution and utility connections. Northern Reliability will oversee the battery energy storage system, including design, component integration and containerization, on-site construction, installation and testing.

The Pinnacle Ridge Solar and Storage project is slated for completion by the end of this calendar year.

Writing for calmatters.org, he points to two shovel-ready storage projects, the Eagle Mountain pumped hydroelectric project in the Inland Empire and the San Vicente Pumped Storage Project in San Diego.

"Together, these projects will support more than 20,000 good paying jobs, many in underserved areas with skyrocketing poverty and unemployment rates," said Hunter.

The projects also will support industries ancillary to construction, such as building materials, heavy equipment and transportation. And, apprenticeships will be a part of these construction crews, he said.

Another trend in the energy sector is renewable reformation, where fossil-fuel processing facilities are retooled to handle renewable energy in one form or another. In Cheyenne, Wyo., the last barrel of crude was being processed at the Cheyenne Refinery before the plant is repurposed to produce renewable diesel.

"We ran the last barrel of crude on August 3 and expect to run the off final intermediates and products inventory in August," Tim Go, HollyFrontier's chief operating officer said during the company's second-quarter call to investors. "We will then begin the conversion of certain units for renewable diesel production and continue to anticipate the Cheyenne Refinery conversion to be completed in the first quarter of 2022," he added.

The company also plans to build a pretreatment unit at its Artesia, N.M., refinery for feedstock flexibility for the renewable diesel unit being built at the plant.

Enel has a goal of expanding its position in the national market. The company plans to install about 1 gigawatt of battery storage capacity across its new and existing wind and solar projects in the United States over the next two years.

As renewable resources become mainstream in the U.S. energy sector, the need for more and bigger production and storage facilities will grow. These mega projects are a boon to both local and state economies. For the construction sector, they spell demand for heavy equipment and full crews on the job site. The outlook is long-term, but the picture is a bright one. CEG