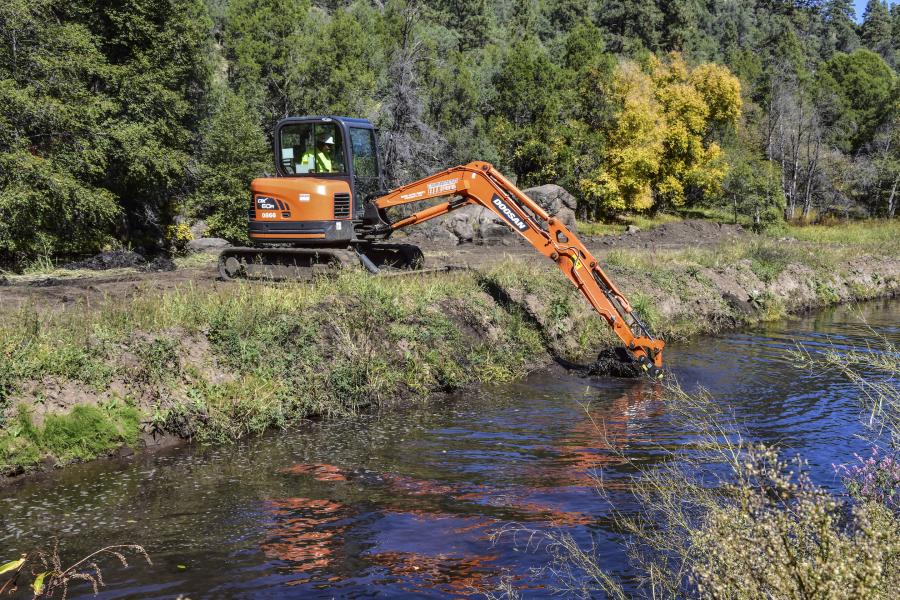 The Doosan DX60R met the weight criteria (under 17,000 lbs.), was equipped with a long-arm option that provided additional reach and was perfect for working on the river.

Five years after the largest wildfire in the history of Arizona burned nearly 841 sq. mi. (2,178 sq km), there are signs that the area is slowly coming back to life. Regrowth is taking place in the national forests, businesses and tourists are returning and there is a new awareness of the importance of managing the land and clearing away debris.

At the Black River Pump Station, located at an elevation of 6,000 ft. (1,829 m) in the Point of Pines area of the Natanes Rim, the staff continues to deal with the fallout from the mammoth fire by removing sediment from the river in order to maintain the pumping capacity of the facility. This is certainly not a routine job. A unique trolley system and a special excavator are required to access the river and remove the lingering effects of the fire.

To meet the specific demands that the pump station has for a machine to regularly clean out the river, a local rental company, San Carlos Equipment Rental, and the nearby Doosan heavy construction equipment dealership came up with a very efficient solution. A Doosan DX60R crawler excavator has been working at the site for about a year and a half, and according to Black River Pump Station foreman Ken Key, “it is doing an excellent job of removing sediment and debris from the channel in front of our five high-capacity pumps. All the operators really like using the excavator.”

The 11,000-acre Bear Wallow Wilderness, part of the Apache National Forest, has been a popular destination for camping, hiking, fishing and other outdoor activities. It is home to black bears, deer, elk and smaller mammals, birds and reptiles. This part of the White Mountains has some of the largest acreage of old-growth Ponderosa pine in the Southwest.

That is where sparks from an abandoned campfire started what became known as the Wallow Fire on May 29, 2011. The blaze was finally brought under control on July 8, 2011. Smoke from the fire extended as far north as the Great Lakes. Dozens of homes and businesses were destroyed, and 6,000 people had to be evacuated. The fire cost government agencies $72 million to suppress and almost $40 million has been spent for assessment, cleanup and rebuilding.

The fire came within 15 to 20 mi. (24 to 32 km) of the Black River Pump Station. Employees watched as the winds shifted the fire toward the east and New Mexico. However, it wasn't long until they felt the impact of the record-breaking fire.

“We noticed problems in the river as soon as the first rainstorm after the fire began,” Key said. “The monsoon season starts on June 15 and, sure enough, that initial rain delivered ash, leaves, silt and other debris right to the pump station, which was forced to shut down for a time. Several creeks run into the Black River so the buildup of unwanted material rose rapidly. Since the monsoon season typically lasts until September, we had a long summer of dealing with the effects of the Wallow Fire.”

After evaluating the problem facing the pump station, the management team took action. The first step was to create a channel or catch basin in the river just before the debris enters the pumping site. During the monsoon season, the river is about 30 ft. (9.1 m) wide when it arrives at the catch basin which is 15 ft. (4.5 m) wide and 60 ft. (18 m) long.

“That reduced the possibility of the river having a straight shot into the pumping plant,” Key said. “The debris accumulates in the catch basin, allowing us to keep it from damaging the plant and our five 300- horsepower, 2,300-volt vertical centrifugal pumps. We need to keep the pumps fine-tuned at all times.”

To clean out the catch basin, the Black River Pump Station team initially used a tractor loader backhoe that they owned. The distance from the office to the river is 300 ft. (91.4 m) down a steep embankment. The only way to deliver equipment to the plant is to use a trolley with a maximum carrying capacity of 17,000 lbs. (7,711 kg). The tractor loader backhoe exceeded the weight limit so it had to be dismantled every time it went up or down.

Rental Store Has the Answer

In seeking a better equipment solution, the management team turned to another enterprise on the San Carlos Apache Indian Reservation. The rental store, which opened in 2012, is filling a much-needed void for construction rental in the area.

“As far as I know, this is the only reservation that has a construction equipment rental store,” said Leon Thompson, office manager of the facility that has six full-time employees. “It is owned by the Peridot Enterprise District, which is part of the San Carlos Apache Tribe. With limited rental options in this area, some of our customers from off the reservation have to make quite an effort to come here. They may have to travel even farther to rent from other stores.”

The rental operation, which shares a building with a hardware store, specializes in construction equipment such as excavators, Bobcat skid-steer loaders, tractor loader backhoes and Doosan air compressors. About 80 percent of its business comes from the 1.8-million-acre San Carlos Apache Indian Reservation; the remainder comes from off the reservation.

“Most of our customers are contractors working on the reservation building homes, schools and a new casino,” Thompson said. “We also get some homeowner business. Weather affects a lot of what we rent. When there is heavy rain, roads will wash out. The monsoon season brings us plenty of road repair business.”

The monsoon rains of 2011 played a role in the rental store's involvement with Doosan equipment.

After initially trying to use its existing tractor loader backhoe to clean out the river in front of the pump station, the staff looked for an alternative. Coincidently, the rental store had been evaluating the Doosan brand of equipment.

“We had tested them at the Doosan Real Operation Center,” said Thompson, speaking of the hands-on Doosan product testing and operating facility near Tucson. “We really liked all the different Doosan machines, and we figured they would be a sound addition to our rental inventory.”

The DX60R excavator was quickly rented by the pump station. The machine met the weight criteria (under 17,000 lbs.), was equipped with a long-arm option that provided additional reach and it was perfect for working on the river, according to Key and his team.

“After using the backhoe and renting another brand of excavator, we all agree that the Doosan machine is the best,” he said. “Five of us use the excavator, and we have all found it to be comfortable, easy to operate and productive. It is a good product.”

“It is really a nice size machine for the rental market,” he concluded. “Both our Doosan excavators have held up well and do exactly what they are supposed to do.”