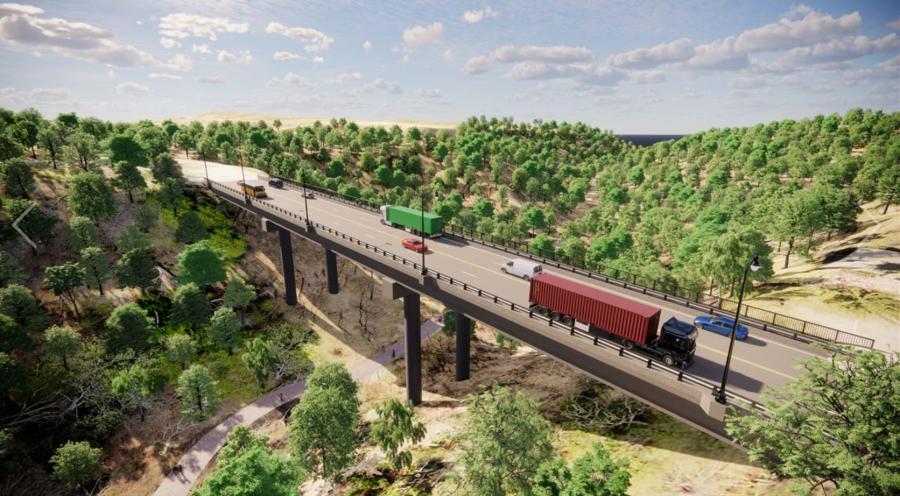 The city of Pittsburgh and the Wolf Administration finalized a grant allowing the Pennsylvania Department of Transportation to design and construct a new structure at the site of the Fern Hollow Bridge. (PennDot rendering)

The Pennsylvania Department of Transportation (PennDOT) announced March 8 that the construction on a replacement for Pittsburgh's Fern Hollow Bridge, the span on Forbes Avenue between Squirrel Hill and Point Breeze that collapsed Jan. 28, could begin in late April

Cheryl Moon-Sirianni, PennDOT's district executive, told the Post-Gazette that most of the construction will take place in 2022. Her department is overseeing the replacement of the bridge for Pittsburgh under an emergency grant of $25.3 million from the federal Department of Transportation.

The bridge's finish date will depend on how quickly the pre-cast concrete beams are available, she said, adding that the final cost also will not be determined until the final piece of design is completed. But, she said, it could be less than the full grant, which would leave money for other projects.

"We're going to build from the bottom up, starting with the substructure," Moon-Sirianni continued. "With this design-build approach, we can still be putting the finishing touches on [the design for] the top while we're working on the substructure."

Currently, crews are performing field work, including surveying, core borings and lab testing as part of geotechnical investigation, and environmental assessment as cleanup of the collapse continues. They have installed erosion and sedimentation controls such as compost filter socks, rock check dams, crane mats at stream crossings and stabilizing disturbed areas with straw and seed.

Under ordinary circumstances, a project is fully designed and put out for bids before work begins, but with the emergency declaration PennDOT was able to choose the designer and contractor in advance so they could work together and complete the project faster.

PennDOT said the team of international design firm HDR and general contractor Swank Construction Co., of New Kensington, Pa., settled on the design in consultation with the city and various civic and historical groups.

The new bridge through Frick Park, which will begin with construction of the substructure while design work continues, will be made of composite pre-stressed concrete I-beams, the state agency said.

When asked, Moon-Sirianni confirmed that a shortage of steel "absolutely" played a significant role in choosing pre-cast concrete for the bridge, while noting that using specialty steel could have added 18 months to two years to the building timeline.

The proposed replacement for the Fern Hollow Bridge will have a straightforward design featuring two sets of open columns that resemble double capital Ts on each side, the Pittsburgh news source reported. That will be different than the earlier design, which had supports on each end to avoid intrusion into Frick Park underneath it.

The design team will continue to work with the Pittsburgh Parks Conservancy and the Pittsburgh History & Landmarks Foundation on aesthetic elements of the project, including the possibility of "treatments to the concrete pier columns and bridge barriers, painting of the beams, a stream restoration plan, [and] ornamental bridge lighting," PennDOT explained in a news release announcing the design.

Additionally, the transportation department also will plant trees and restore any damaged areas of the park because of the collapse.

In speaking with the Post-Gazette, Moon-Sirianni explained that the bridge will remain the same length and width, so there will not be time-consuming work changing the road approaches at each end. It will also include four 10-ft.-wide travel lanes, two-ft.-wide shoulders on both sides, a five-ft.-wide sidewalk on the north side, and a 10-ft.-wide shared-use path for bicyclists on the southern side of the span.

Scott Bricker, executive director of Bike PGH, suggested that PennDOT take another look at the configuration of the bridge. For safety reasons, he recommends two lanes for motor vehicles, a reduced speed limit and bike lanes on each side of the bridge as well as better crosswalks at entrances to the park.

"I don't think Forbes [Avenue] has enough traffic that it needs to be four lanes," he explained. "We want to see a bridge reopened. We're also going to have it for the next 100 years, so we want to do it right."

The collapsed bridge, which had been rated in poor condition for more than 10 years, injured 10 people. The cause is still under investigation by the National Transportation Safety Board, which could take 18 months to reach a decision.