Replacement of NJ Rt. 3 Bridge Over Hackensack River in Secaucus is Planned 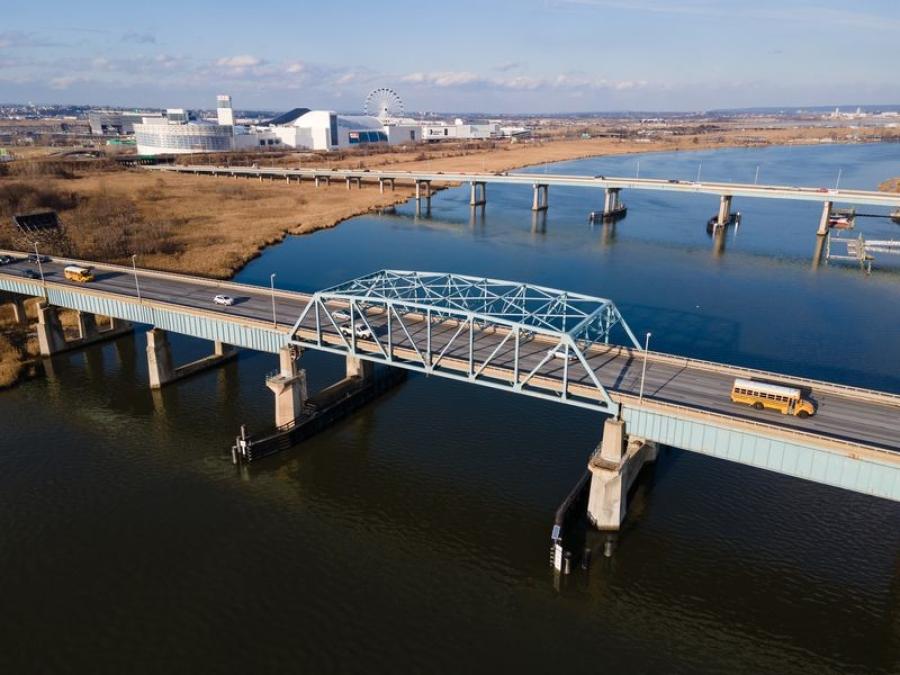 The current eastbound NJ Route 3 bridge over the Hackensack River is one of the state’s most troubled and will be completely replaced.

The current eastbound NJ Route 3 bridge over the Hackensack River is one of the state's most troubled and will be completely replaced. It also is one of 502 bridges in the state that need improvements or overhauls.

When it is built, the new NJ Rt. 3 bridge will be sturdier and may also include the capacity for a light rail system extending west through Secaucus and over the river to the American Dream mall and MetLife Stadium in East Rutherford.

"That is, in and of itself, a potential game changer," Murphy explained. [The light rail line] is an option we will have as a state, and obviously an option we want to pursue."

"This is going to be a reality," Menendez said of the new bridge during a news conference near the current bridge. "We're not standing here today and saying, ‘We look forward to trying to fight for monies for a bridge that's going to do this or that.' The money's here, the design is going to begin, and that means we are going to see success."

Funding for the $143.6 million project will come from President Biden's $1.2 trillion infrastructure bill.

New Bridge Still on the Drawing Board

Diane Gutierrez-Scaccetti, commissioner of the New Jersey Department of Transportation (NJDOT), said the current NJ Rt. 3 river span is in "the worst condition of any bridge in the state."

She described the replacement project as being in the design phase now, and physical work on the bridge will likely not begin for two years. There also is no timetable for when work would end.

A press release from Menendez's office said the new bridge would be built north of the existing bridge, "causing minimal disruption to the flow of traffic."

When construction does commence, Gutierrez-Scaccetti noted, the state will begin by driving piles into the Hackensack River to support the light rail. She added that the NJ Rt. 3 bridge project will not singlehandedly lead into the extension of the light rail system, but it is necessary to make the tracks part of the bridge structure. Waiting to perform the pile-driving would be more expensive, she said, and require a "duplicate set of permits."

"Putting [the supports] in the water is the hardest piece for us," Gutierrez-Scaccetti explained. "Making sure this bridge is ready for [light rail] when we're ready to build it is key. It's the wisest use of our dollars."

NJDOT Hopes Light Rail Can Connect to Other Lines

There are two light rail systems in North Jersey, the Newark and Hudson-Bergen lines. The latter system runs from North Bergen and Weehawken in the north to Bayonne in the south, and to Jersey City's West Side.

The Newark and Hudson-Bergen lines do not intersect.

Although the prospect of light rail is still speculative, Gutierrez-Scaccetti painted a picture of what it could look like at some point.

"We have a vision for the Secaucus Junction train station to make it a hub for those who wish to come and enjoy entertainment at American Dream, or a game at the stadium," she said.

Gutierrez-Scaccetti added that her agency believes the presence of light rail across the new NJ Rt. 3 bridge would allow riders coming from Boston or Washington to enjoy "a nice train ride, get off at Secaucus, and hop on a monorail type system that may allow [them] to travel all the way through without being in [their] car."

Every day 150,000 vehicles travel over the NJ Rt. 3 bridge, which was built in 1934 and has since become the site of frequent repair work, leading to snarled traffic and frustrated drivers.

In his remarks to the Jersey Journal, Secaucus Mayor Michael Gonnelli said a rail system across the bridge would be "fantastic" for taking many of those cars off the road.

In the immediate future, the NJ Rt. 3 bridge construction will create nearly 2,000 jobs, according to Ray Pocino, vice president and eastern regional manager of the Laborers' International Union of North America.