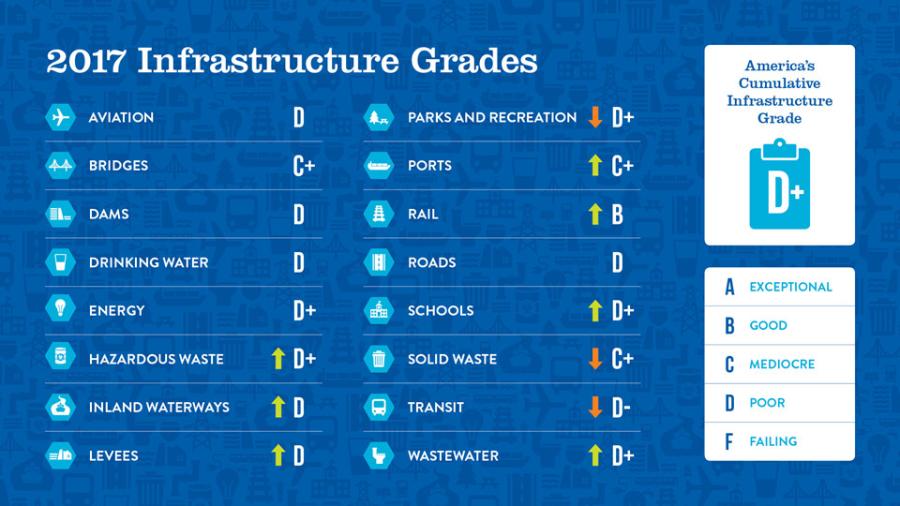 Every four years, the American Society of Civil Engineers (ASCE) produces a comprehensive report grading various zones of infrastructure on both the national and statewide levels. Although infrastructure often goes overlooked or is even taken for granted altogether, it remains our country's lifeblood and serves as the foundation upon which our daily lives are ultimately carried out. With the release of each ASCE report comes the reluctant affirmation of a grim set of facts that many of us already know too well about our most vital — we as a society have allowed our bridges and roads to decay to the point of near ruin.

As with the previous ASCE Infrastructure Report Card, which examined conditions for the year 2013, the cumulative GPA of the United States as a whole is once again a D+ in the organization's latest summary. The individual categories of infrastructure that the ASCE took into consideration is as follows: Aviation, Bridges, Dams, Drinking Water, Energy, Hazardous Waste, Inland Waterways, Levees, Ports, Public Parks, Rail, Roads, Schools, Solid Waste, Transit and Wastewater. Out of the 16 zones of infrastructure that were surveyed, only four received passing grades. The scores ranged from as high as a B for Rail to a D- for Transit on the low end of the scale.

While any of the failing grades should be enough cause for concern, perhaps none is more troublesome than the D that was given to roads. According to the current ASCE report for 2017 (the most up-to-date year available), the U.S. government has been underfunding its highway system for years, resulting in a $836 billion backlog of highway and bridge capital needs as our roads continue to rapidly deteriorate. The majority of this backlog is designated for the maintenance of existing highway systems ($420 billion), while another $123B is needed for bridge repairs, $167B for system expansion and $126B in system enhancements — which accounts for safety, operational improvements and environmental projects.

It should come as no surprise to learn that a large factor in why our country's roads are so poor has to do with an increase in the overall amount of congestion/usage. Of the country's 100 largest metro areas, all but five saw increased traffic congestion from 2013 to 2014. Additionally, the report states that 2016 saw a record high in total vehicle miles travelled. According to the national transportation research group TRIP, 21 percent of the nation's highways had poor pavement condition in 2015. Since 1971, the private nonprofit organization has researched, evaluated and distributed economic and technical data on surface transportation issues.

Even though a C+ is certainly a better grade to receive than a D, this mark should still not be considered acceptable when it comes to something as important as our country's bridges. The U.S. has 614,387 total working bridges, and almost four in 10 are 50 years or older, the ASCE reports. Of those 600,000-plus bridges, roughly 56,000 (or 9.1 percent) have been deemed structurally deficient. One point of promise is the ASCE's acknowledgement that the overall number of structurally deficient bridges is on the decline. However, the average age of this infrastructure zone continues to climb, suggesting that many of our nation's bridges are close to reaching the end of their useful life. The average age for a bridge in the U.S. is 43 years old. Most bridges are designed to last 50 years.

The ASCE's grading system was based upon the following criteria: Capacity, Condition, Funding, Future Need, Operation and Maintenance, Public Safety, Resilience and Innovation. Capacity asked whether the given infrastructure's size meets current and future demands. Condition questioned the infrastructure's existing and near-future physical form. Funding, of course, looked at the dollar-amount that government is willing to spend on the structure versus the estimated figure needed. Future Need considered necessary improvements and funding prospects. Operation and Maintenance examined the owners' ability to operate and maintain the infrastructure properly, as well as whether it falls in compliance with government regulations. Public Safety is self-explanatory. Resilience scrutinized the given infrastructure system's capability to prevent or protect against significant multi-hazard threats and incidents. Finally, Innovation explored what new and innovative techniques, materials, technologies, and delivery methods are being implemented to improve the infrastructure.

"ASCE looks forward to working with business leaders, the federal government and Congress to solve this problem for Americans today and in the future," said Robin Kemper, the engineering society's president. "It's time to return our ‘D+' infrastructure to the world-class status it once had." CEG