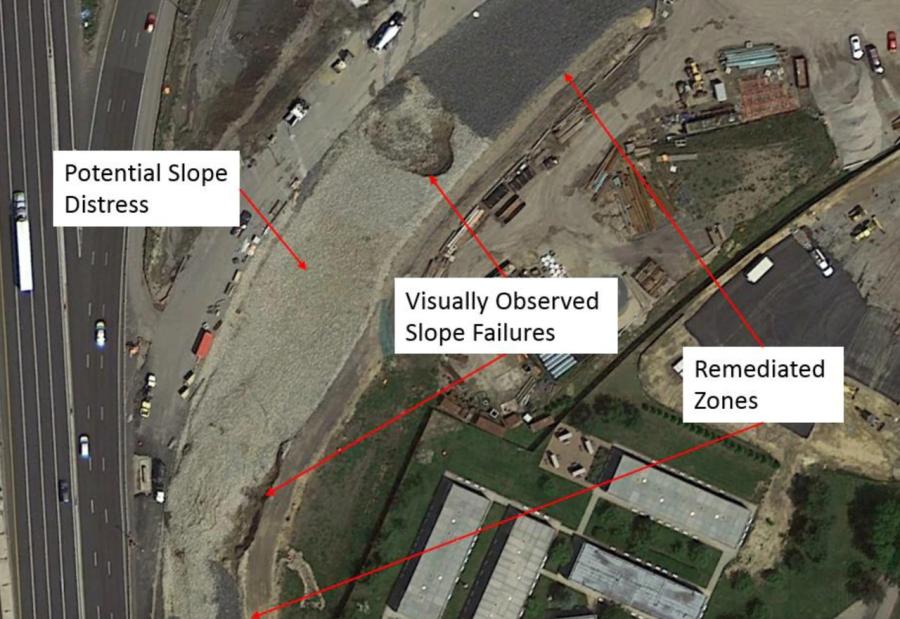 For more than a year, people in New Jersey have wondered what caused a large retaining wall at a major construction site along Interstate 295 to partially collapse.

Now, they are finally getting answers.

A report commissioned by the New Jersey Department of Transportation (NJDOT) showed that inadequate building materials and "a history of slope instabilities" years in the making contributed to the collapse of the roughly 30-ft.-tall and 19-ft.-wide wall in March 2021.

"The report lays out the contributing factors behind the collapse and we have been assured by [NJDOT] that steps are being taken to address these issues before rebuilding Wall 22, which we understand is expected to be completed by the summer of 2023," New Jersey U.S. Rep. Donald Norcross and Assemblyman Bill Moen said in a joint written statement released June 1.

Wall Found to Have a Suffered a ‘Complex Failure'

Investigators discovered problems had begun at Wall 22 long before it collapsed last year on the interstate ramp under construction — part of the $1.1 billion South Jersey Direct Connection highway project to unclog one of the region's worst traffic bottlenecks.

First conceived in 1985 and designed to seamlessly unite I-295 with New Jersey Highway 42 and I-76, construction finally began in 2013 and is expected to wrap up in 2027, WCAU-TV noted, but the final contract of the project is not even expected to be up for bidding until 2024.

The Philadelphia Inquirer reported June 6 that signs of instability had already appeared in the structure as early as 2016, according to the forensic engineering report. The newspaper obtained a copy of the report through an Open Public Records Act request.

New York-based Hardesty & Hanover LLC, the firm hired to investigate the collapse, concluded that Wall 22 in Bellmawr suffered a "complex failure" that included displacement of sandy fill soil used to build the embankment and slope underneath, as well as a faulty foundation.

The 700-page report meticulously documents what went wrong, the Inquirer reported, but does not address how the wall will be rebuilt, at what cost, and whether taxpayers or the contractors involved will pay for it.

Several contributing factors to the collapse were identified in the report:

Early the next morning, workers discovered some of the tiles of the wall bulging out as well as fissures on top of the structure and standing water at the base with drainage pipes yanked out of place.

No one was injured in the failure because the elevated roadway supported by the wall was not open to traffic.

Problems Had Persisted for Years

The Philadelphia newspaper described Hardesty & Hanover's investigation as being like an archaeological dig: Some layers were excavated with a backhoe, and then, in critical areas, the engineers conducted tests and combed through blueprints and construction documents.

According to their findings, in May 2016 a large sinkhole was found on the grading work for the wall and roadway. A larger area near the sinkhole was identified as "potential distress" of the slope, the investigators noted. When Wall 22 was constructed, beginning in 2018, it was placed over an area of wet soil, the report discovered.

Later, work was stopped for several weeks in February 2019 after several concrete panels in the wall, secured with metal straps driven into the embankment, were discovered to have shifted out of place. Moisture in the backfill material "may have caused the embankment to expand when frozen and displaced the panels," the report said.

Two years later, around March 11, 2021, just days before the collapse, workers noticed the first cracks in the pavement above the wall. The cracks were reexamined again five days later, the investigation's analysis noted, but no changes were reported. However, on March 23, workers noticed "a significant settlement" of the pavement.

"Discussion with NJDOT personnel who observed paving in this area recall [seeing] ‘soft spots' in the subbase which indicates that some distress may have existed months before the cracks were noticed for the first time around March 11," revealed Hardesty & Hanover. "This distress, along with observations during the paving process, further validates that the system exhibited signs of instability before failure occurred."

Is Smooth Traffic Ahead for South Jersey Drivers?

Eventually, the roadway will form the core of southbound I-295, carrying seven lanes toward Delaware. Now, drivers must negotiate Al-Jo's curve, with its brutal merge onto N.J. 42, before merging again onto the southbound interstate.

The Direct Connect project was designed to smooth traffic flow at what has historically been a very congested interchange of I-295, I-76, and N.J. 42. Not only does the tangle of roadways lead to Delaware, but the interchange also is a major gateway to Atlantic City and other New Jersey Shore areas to the south.

An ancillary project, the $200 million Missing Moves, is being built nearby to improve local links to N.J. 42 in Bellmawr, Mount Ephraim, and Gloucester City.

If the work on South Jersey's Direct Connection extends into 2028, it will come close to rivaling the length of time it took to build Boston's Big Dig. That massive engineering effort involved, among other things, digging two long tunnels to carry interstates beneath downtown Boston and under the harbor to Logan International Airport. The construction there lasted from 1991 to 2006.

By the time the Direct Connection project is finished in 30 or so years, though, its construction may not take as long as the rebuilding of the 51 mi. of I-95 in Pennsylvania. That effort, in fact, is likely to take much longer to complete than either the Big Dig or the South Jersey projects, the Philadelphia newspaper noted.

"As I like to say, if you had a child entering kindergarten when construction began, they could get a master's degree in engineering and be working on the project before it's finished," Moen said.