Restaurant owners decided to take a picture of a busboy serving a waiter on the restaurant’s “new terrace.” 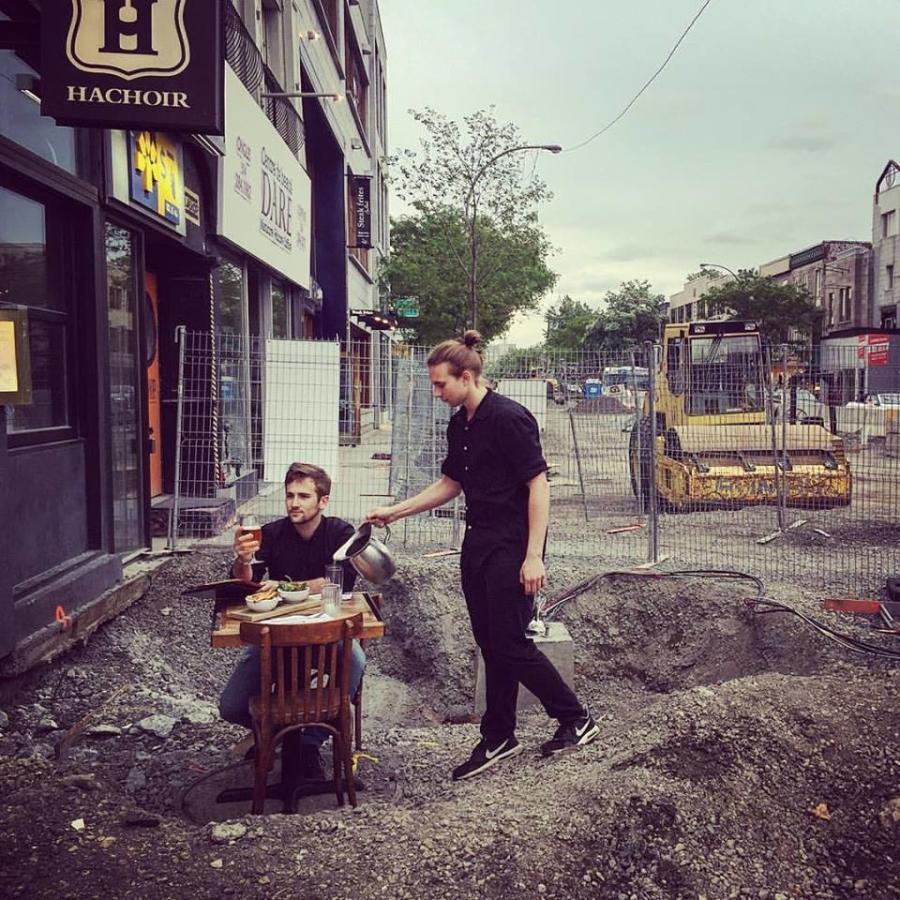 Image courtesy of Facebook. A Montreal restaurant is fighting the frustration of being located in the middle of a major construction zone with humor.

The website Scottish Constuction Now is reporting that a Montreal restaurant is fighting the frustration of being located in the middle of a major construction zone with humor.

The Hachoir restaurant is located at the intersection of Rachel and St-Denis streets — both of which are under construction.

So co-owner Alain Dussault decided to take a picture of a busboy serving a waiter on the restaurant's “new terrace.”

The picture clearly struck a chord on Facebook, where it has been “liked” and shared thousands of times since it was posted Thursday night.

“A lot of people are sympathetic to the situation. A lot of people find it funny, which I like,” Dussault told CBC Montreal's 'Homerun'. “We can tell that the construction is bad but we take it with a grain of salt.”

Like many merchants on St-Denis Street, Dussault hasn't escaped the aesthetic and financial strain of the ongoing construction.

“It's a mess. There's a big hole in front of the restaurant. You cannot cross. The sidewalk is blocked so you have to go around like a big loop,” he said, adding that it's the third summer in a row that his restaurant is affected by the construction.

The recent stretch of construction began in 2015 because St-Denis Street, between Duluth Avenue and Marie-Anne Street, requires new sewer and drinking water pipes. The construction work won't wrap up before November 2016.

Dussault estimates he lost 25 per cent in sales in the last month. But he also said that his restaurant's networks and loyal neighbourhood customers have allowed Hachoir to fare better than most businesses.

Though the city and contractors have been giving him conflicting information, he says he's happy that at least the sidewalk next to the restaurant was reopened Friday.

Dussault said affected storekeepers are meeting Monday to decide whether to leave the SDC, the St-Denis merchant's association, over the way it's handled the situation.

Until then, Dussault is taking a pragmatic approach.

“What can we do really. Things have to be done,” he said. “Hopefully they're going … as quick as they can.”