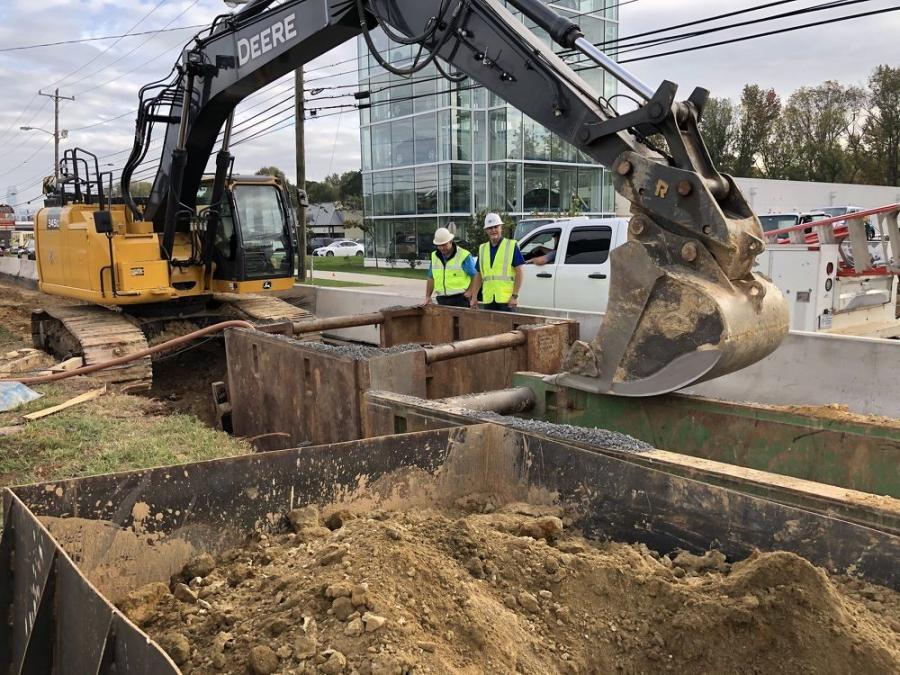 The new pipe installation parallels the old water main, with work going on between the two sets of lanes along South Boulevard between Scaleybark Road and Worthington Avenue.

Anyone who has regularly driven around Charlotte, N.C., in the last couple of decades can attest to its seemingly never-ending growth. New skyscrapers are erected each year in the uptown, along with multi-story residential apartments and condominiums in the trendy neighborhoods nearby.

New roads and bridges also are constantly being built, most notably the ongoing work at the interchange of Interstates 77 and 85, on the western edge of the central business district.

Many Charlotte neighborhoods, districts and streets also have been revitalized in recent years. The best example may be the South Boulevard corridor, a high-profile roadway that begins on the west side of uptown and I-277, where it becomes a busy and narrow four-lane avenue running south past a mix of older homes, upscale apartment buildings, businesses and shopping areas.

Just 20 years ago, though, much of the corridor was a blighted area of unused and deteriorating industrial plants, mills and warehouses. Since then, it has rebounded in spectacular fashion, due in large measure to new investment, adaptive reuse and the construction of Charlotte's light rail, known as the LYNX Blue Line.

With Charlotte's population growth having swelled to almost 900,000 people, much of the city's old infrastructure, which had served it well for decades, now needs to be updated. 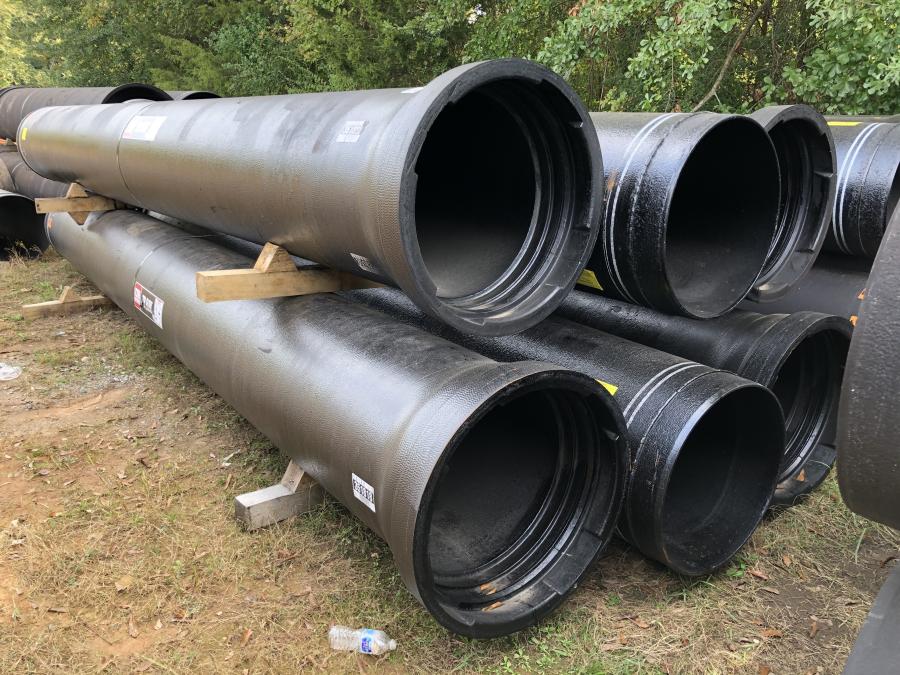 One such utility improvement is the South End Water Main (SWM) Project, which desperately required an improvement because of both the high rate of development in that part of town and the fact that the existing water line was put in during the 1930s, when Charlotte had less than 100,000 residents.

The SWM included sewer line restoration in its initial phase of work. Phase II, now under construction, is the installation of a new water line installation right down the middle of South Boulevard.

"The area serviced by this water system is experiencing a high rate of infill development and the existing water system cannot accommodate projected growth," read the project's description on the city of Charlotte's SWM website. "A new and larger pipe, which will be double in diameter of the existing pipe, is required to serve customers."

Fortunately, Help Is Nearby

That is where the experienced crews from R.H. Price Inc. can be found working on a $19.5 million contract from the city to replace the aging 12-in. water main with a 24-in. pipeline.

Based in Charlotte, R.H. Price was founded more than 30 years ago by Jimmy Price, who still serves as its president. Since its formation, the company has successfully completed a wide range of municipal water and sewer projects in the metro region. Like the SWM, many were designed to rehabilitate existing water and sewer lines — removing and replacing existing lines — while also maintaining service to customers.

"Before my father started the company in 1987, he had been working in the same industry for a while and decided to go out on his own because he saw the region's potential for growth," recalled his son, Stephen Price, vice president of R.H. Price. "Since then, we have done hundreds of projects — from water main replacement upsizes throughout the uptown to large infrastructure water transmission mains all over Mecklenburg County. Our crews have also installed difficult sewer replacement upsizes and a bit of rehabilitation as well."

Among those works was the Stevens Creek trunk sewer installation and stream restoration project as well as the Ramah Creek sewer interceptor, both in Mecklenburg County. The latter project was successfully completed by R.H. Price five months ahead of schedule despite working through an excessive quantity of rock.

Outside of the city, the contractor has in recent years finished similar jobs in Mooresville, N.C., and in South Carolina's York and Lancaster counties.

Each was done to accommodate the utility needs for the Charlotte area's influx of people and companies. 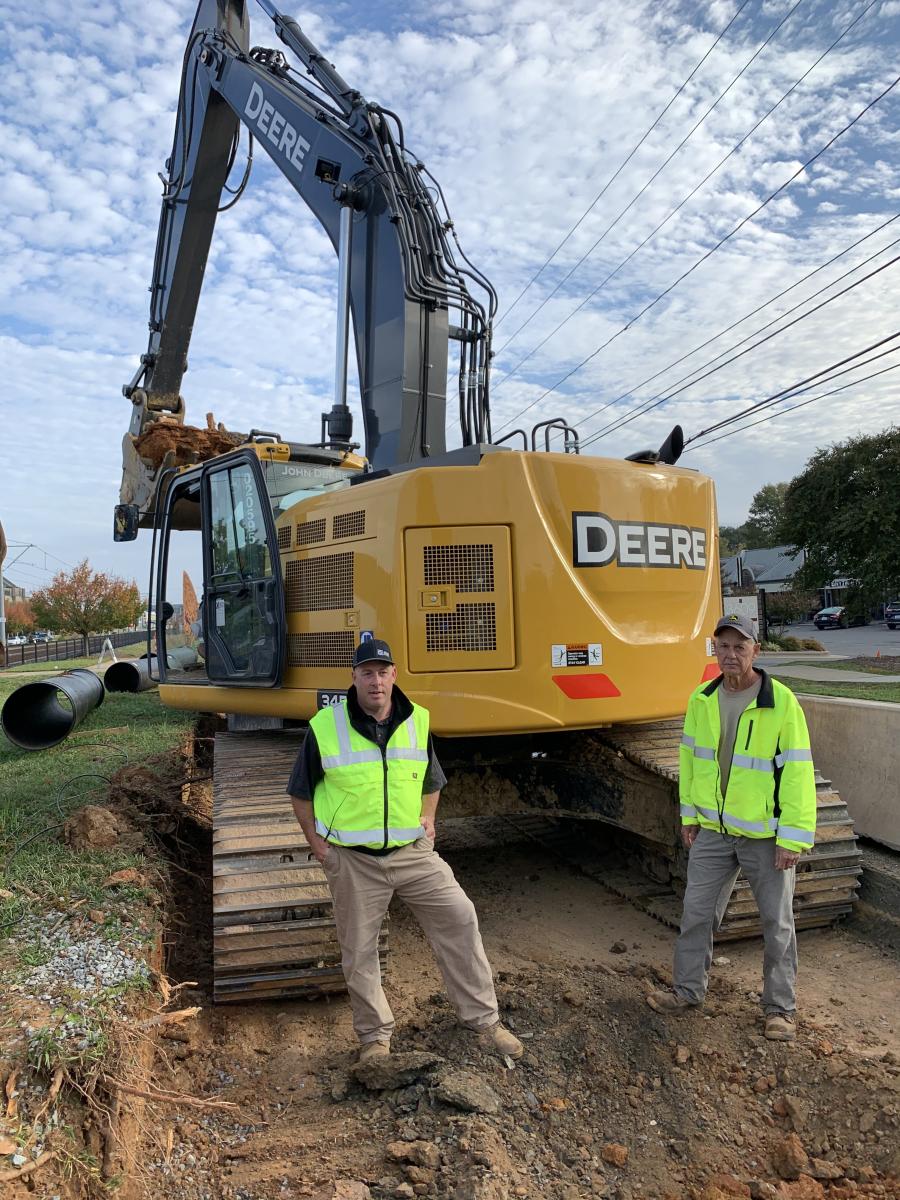 Over the years, R.H. Price's projects have ranged in length from a few hundred feet to more than 20,000 ft., with pipe diameters from 2 up to 64 in.

"[On the SWM we] are putting in a little less than 10,000 feet of water main," Stephen Price explained. "We are going through and upsizing the existing main and replacing or connecting to all the water meters, plus putting in new fire hydrants, valves, etc."

The new pipe installation parallels the old water main, with work going on between the two sets of lanes along South Boulevard between Scaleybark Road and Worthington Avenue. The utilities contractor also is performing its work close to the light rail tracks.

As the contractor for the design-build project, R.H. Price has teamed with Stantec, a global engineering firm with an office in Charlotte.

"We were selected because of our experience installing large water mains in urban environments, so the city has confidence in us to get this project done," Price said.

His company began working on the SWM Phase II project last fall with an anticipated completion in 2022.

New Water Main Made to Last

According to Price, the water main pipe is made of ductile iron, a long-lasting and durable pressure-class 250 that contains a cement lining on the inside of the pipe and an asphalt coating on the outside. In addition, it has a welded bead on the spigot of the pipe. He described it as a U.S. Pipe TR Flex Restrained Joint system that, after pushed in, allows crews to install wedges that slide in against that bead so that the pipe cannot come apart.

"The 24-inch pipe will quadruple the capacity of its predecessor," he explained. "The water volume is about 25 gallons per foot, but when you start talking about flow rates that is a bit more complicated because several factors come into play, such as velocity, pressure, head loss, etc."

Finding solutions to working within a tight area several feet below ground is a specialty of R.H Price Inc., both in rural areas and high-density urban settings such as that found at the SWM project.

Stephen Price said that his experience has taught him that when working in an older urban area, like the South Boulevard corridor, one should always expect the unexpected. 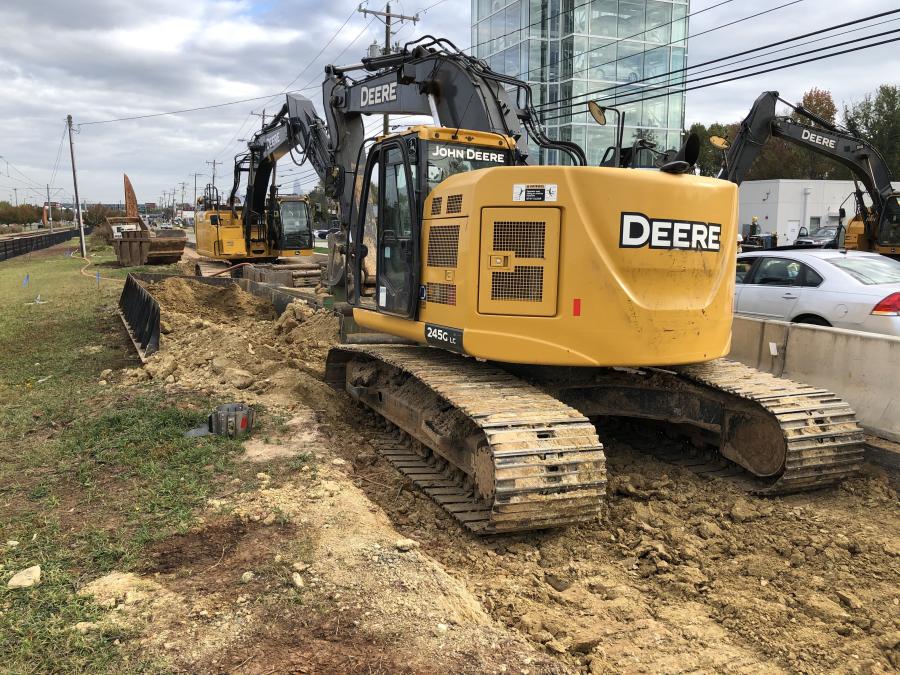 "There are going to be a lot of unknown utilities that we will come across in this section of town," he explained. "But one of the major challenges of the project is the narrow work zone in which we work. In a lot of places, we have only a 14-foot-wide area in which to function."

Excavating in a crowded neighborhood also presented the problem of where to put the dirt that Price's crews scoop up. After thinking through the dilemma, he came up with a novel way to both move material out of such a narrow hole and put it where it would not disrupt vehicle traffic.

"On a lot of the project, we can't even swing the excavator arm around 180 degrees without stopping traffic," he said. "So, we decided to take a steel plate and turn it into a sled so that we could put dirt directly on top of the excavation and shift [the plate] longitudinally from where we are digging to where we are backfilling. By doing so, it enables us to work within that 14-foot-wide zone without holding up traffic and having to spin a 180 for every bucket of dirt that comes out of the hole."

The COVID-19 pandemic has at times lessened the number of vehicles on the road since R.H. Price began on the project. When that occurs, Price's crews try to get as much work done as they can to take advantage of the lighter traffic.

"But this is a major corridor, and we are also reducing South Boulevard to one lane in each direction to install this water main," he added. "That means miles and miles of traffic backup is another of our challenges as well as a headache for drivers."

By the start of the water main replacement in 2020, Price said that for more than a year his company had been relying on the expertise of John Deere and James River Equipment in Charlotte to identify and supply the contractor with the right machines for the water main project.

Already a long-time proponent of John Deere equipment, Price chose to bring those machines to the SWM project, especially because of the capabilities of the JD 345G LC excavator, the only one he has seen, "that offers the 80,000-pound reduced tail swing and the longer stick, giving us a little longer reach.

"Just to have the additional reach and strength over a 55,000-pound machine is what we needed," he added. "It has been great."

James River Standing By to Help

Since 1977, the combination of experience, culture and focus on customer service has resulted in James River Equipment becoming one of the most distinguished and widely respected John Deere dealers in the country. Its Charlotte branch is one of 20 locations in North Carolina.

According to Stephen Price, R.H. Price and James River Equipment have worked hand in hand for about eight years.

"We have been extremely happy with what we have gotten through James River. On this project, we have eight pieces of John Deere equipment and a lot of other machines James River provides us too."

James River's Charlotte full-service location maintains a garrison of professionals standing by to render assistance to its customers, a fact that reduces the anxiety levels of many area contractors.

Price works primarily with Jeff Fink at James River Charlotte. When a maintenance issue crops up on one of his machines, though, Price first contacts James River Service Dispatcher Keith Kafka and Service Manager Mike Young.

"Since we started with James River, they have helped us with a lot of things and even agreed to service some smaller machines that we didn't get from them," Price said. "So, overall, it has been a great working relationship."

R. H. Price Inc. is located at 5226 Beatties Ford Road in Charlotte. For more information, call 704/395-0672, email [email protected] or visit www.RHPrice.us. The Charlotte James River Equipment dealership is located off I-77 Exit 18, north of the I-85 and I-77 interchange, at 9550 Statesville Road. For more information, call 704/597-0211 or visit www.jamesriverequipment.com/locations/charlotte-nc/. CEG