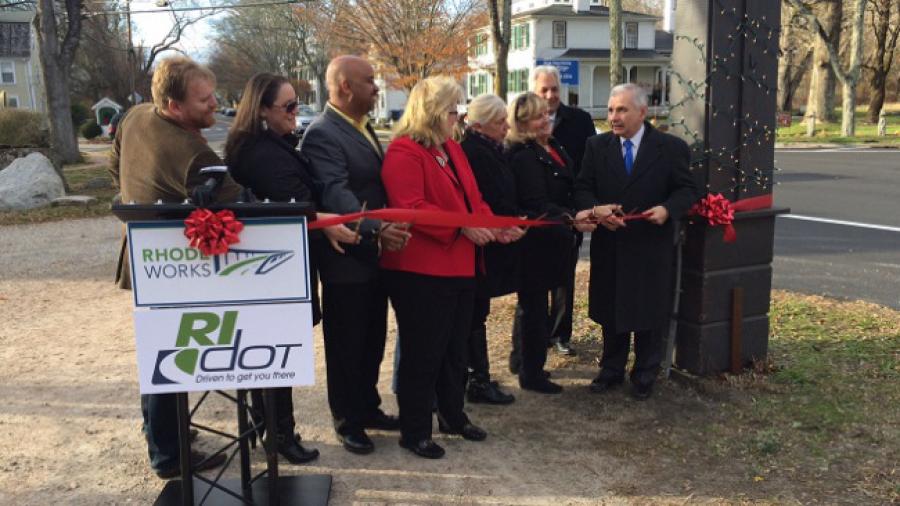 RIDOT) officials were joined by Sen. Jack Reed at a ceremony to mark the completion of a resurfacing project to address poor pavement conditions on parts of Route 138. via http://url.ie/11nkz

Rhode Island Department of Transportation (RIDOT) officials were joined by Sen. Jack Reed at a ceremony to mark the completion of a resurfacing project to address poor pavement conditions on parts of Route 138 in the South Kingstown villages of Kingston and West Kingston. The $1.1 million project wrapped up on budget and two weeks ahead of schedule.

RIDOT resurfaced about 1.5 mi. (2.4 km) of roadway on certain sections of Route 138 between Fairgrounds Road in West Kingston and approximately 700 ft. (213 m) east of the intersection with Route 108 in Kingston. This included most of the heart of historic Kingston village and the Kingston Railroad Bridge. The project began in late September to provide relief for motorists from poor riding surfaces until a more comprehensive resurfacing project is scheduled.

“For the second week in a row, we're pleased to visit South County to deliver the good news that we've completed work ahead of schedule,” said Peter Alviti Jr., RIDOT director. “With thousands of people using Route 138 every day, we at RIDOT understand the importance of making sure our roadways create a positive first impression for the state.”

“I am pleased to have delivered federal funding to help make our roadways safer and smoother. Ensuring all our streets and roads are in good condition takes an ongoing team effort and significant investment. I commend RIDOT and Gov. Raimondo for taking concrete steps to advance transportation projects like this and I will continue working at the federal level to help rebuild and enhance our transportation infrastructure,” said Reed, the ranking member of the Transportation, Housing and Urban Development, and Related Agencies (THUD) Appropriations Subcommittee, who secured $12 million in federal funds for road improvements along Route 138.

“Completion of this project is an excellent example of what happens when state agencies work together to serve the public,” said David M. Dooley, URI president. “I am deeply grateful to the leadership and workers of the Rhode Island Department of Transportation for hearing our concerns and acting on them with urgency. Route 138 in Kingston Village is now a much safer, smoother and more pleasurable way for our students, faculty, staff, alumni and visitors to get to the campus.”

The resurfacing project is the first in a series of projects to address roadways, intersections and bridges along the Route 138 corridor in South County, as outlined in RIDOT's 10-year plan. Combined, approximately $28 million will be invested in the corridor.

• Route 138 Kingstown Road Contract 1 — An initial roadway reconstruction project for Route 138, from Railroad Avenue to Route 108, with construction funding of $9.45 million programmed starting in Federal Fiscal Year 2020. The project includes new roundabouts at the intersections of Route 138 and Plains Road and Route 138 at the entrance to the Keaney Athletic Complex.

• Route 138 Kingstown Road Contract 2 — A second roadway reconstruction project for Route 138, from Route 2 to Fairgrounds Road, with construction funding of $7 million programmed starting in Federal Fiscal Year 2022. The project includes a new roundabout at the intersection of Route 138 and Route 2.

• Roundabout at Intersection of Route 138 and Route 112 — Construction of a roundabout at this intersection in Richmond, with construction funding of $1.5 million programmed starting in Federal Fiscal Year 2022.

• Bridge Group 25 — Bridge preservation activities at three small bridges along Route 138, crossing Mitchell Brook, the Chipuxet River and Chickasheen Brook, all in South Kingstown. These are part of a larger 37-bridge preservation project with construction funding of $9.26 million programmed starting in Federal Fiscal Year 2023. Bridge preservation activities address minor bridge repair issues that, if left unchecked, would result in more extensive rehabilitation or replacement projects, which are on average three to four times as expensive to complete. CEG