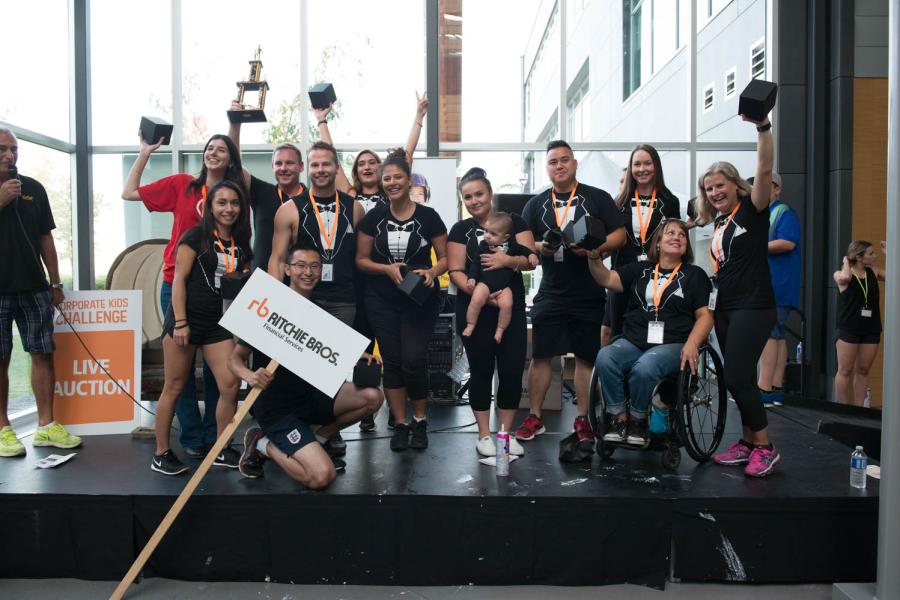 For the past eight years, Ritchie Bros. has hosted dozens of corporate teams from the greater Vancouver area to participate in a charity sports day challenge to raise funds for KidSport B.C., a community-based sports funding program that provides grants for financially disadvantaged children to participate in amateur sports.

Helping others can be fun. Just look at the massively successful Corporate Kids Challenge held every September at Ritchie Bros.' headquarters in Burnaby, B.C.

For the past eight years, Ritchie Bros. has hosted dozens of corporate teams from the greater Vancouver area to participate in a charity sports day challenge to raise funds for KidSport B.C., a community-based sports funding program that provides grants for financially disadvantaged children to participate in amateur sports. In total, the event has raised more than $1.1 million for KidSport, including $138,000 raised at this year's event held on Sept. 9.

"I think the Ritchie Bros.' Corporate Kids Challenge is the best charity event in Canada, and it raises an unbelievable amount of money, allowing us to help more than 500 kids participate in a season of sport each year," said Pete Quevillon, director of KidSport B.C. "We are so fortunate to have Ritchie Bros. as a member of our family—their support is so much more than just a corporate partnership. The level of commitment from the entire organization is ongoing, well outside the actual event day, encompassing literally thousands of hours of volunteerism and amazing fundraising. Quite honestly, I don't know of another corporation that displays this level of passion for a cause."

The Corporate Kids Challenge is designed to bring out the kid in you. The full-day charity event held every September, brings corporate teams together with a series of special guest teammates, including Canadian Olympians, local athletes and celebrities. This year's event featured John Herdman, head coach of the Canadian women's national soccer team; Canadian Olympians: Elizabeth Gleadle (javelin) and Evan Dunfee (race walking); and many others. The event also includes a silent and live auction.

"We believe strongly in the power of sport to teach the life skills necessary to build future leaders in our communities," said Todd Wohler, chief human resources officer of Ritchie Bros. "We started this event as a corporate charity initiative, but it has turned into so much more —

now every year our employees run their own fundraising initiatives leading up to the event and this year they raised more than $13,000! Getting involved with KidSport has helped grow our company culture in more positive ways than we could have imagined."

Onsite for this year's event was Ravi Kahlon, MLA (North Delta) and parliamentary secretary for Sport and Multiculturalism, and also an athlete who competed on the Canadian national field hockey team for 12 years, to present a donation to KidSport from the province of B.C.

"Since taking on the role of parliamentary secretary of Sport six weeks ago, I've been travelling the province talking with sports groups, mostly at the grassroots level, and the one thing you hear consistently is that it's getting increasingly difficult for kids to get involved," said Mr. Kahlon, at the Corporate Kids Challenge event. "That's why the work being done by KidSport and the Corporate Kids Challenge is critically important and I want to thank Ritchie Bros. and all the companies here for getting involved. Our province has committed $400,000 to KidSport this year and I hope this continues and grows because it's critical that our kids get the opportunity to participate in sport — I wouldn't be here without it."

Ritchie Bros. plans to host the Corporate Kids Challenge again in 2018. To learn more about the event and how you can help, visit www.rbauction.com/kidschallenge.