Rock Fall Closes Portion of I-70 in Colorado

A large rock fall incident on Interstate 70 in Northwestern Colorado on Feb. 15 is still in the process of being remedied. 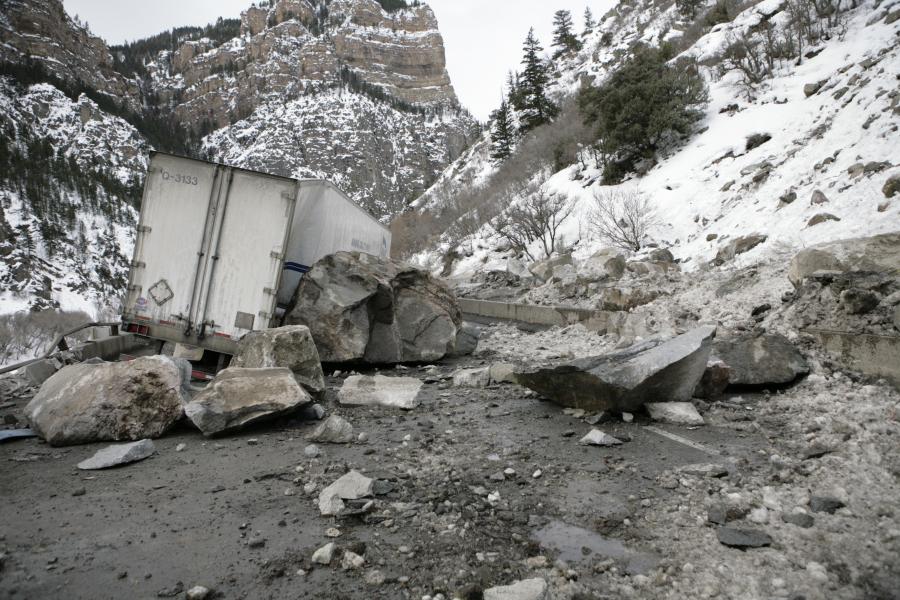 Tracy Trulove/Colorado Department of Transportation photo A semi suffered heavy damage in the Feb. 15 rockfall incident on I-70 in Glenwood Canyon. No injuries were reported.

A large rock fall incident on Interstate 70 in Northwestern Colorado on Feb. 15 is still in the process of being remedied.

The rock fall occurred in Glenwood Canyon, which is in Garfield County, around 2:30 a.m. Colorado Department of Transportation (CDOT) crews flagged traffic throughout the day as they worked to clear boulders. A second slide incident in the same location occurred at 9:03 p.m. that night. About an hour later, CDOT fully closed I-70 through the canyon for safety.

Initially, CDOT's geohazards team was on the site and also evaluated the location by helicopter. They determined that there was damage to the roadway, retaining wall, bridge and guardrail.

A semi-truck was caught in the second slide and disabled, but no injuries were reported. The Colorado State Patrol helped to clear out any semis and passenger vehicles that were stuck in the canyon.

CDOT crews and contracted rock fall workers began rock scaling at the location in an attempt to bring down any additional debris. As a safety precaution, crews also installed rock fall mitigation fence on the westbound lanes.

Rock scaling operations brought significantly more debris down from the slope than originally anticipated. Rock fall crews worked to stabilize the slope in addition to the mitigation fencing. Crews also worked to remove the damaged wall and guardrail in the westbound lanes.

“Safety is our number one priority,” Amy Ford, CDOT communications director, said. “There is a lot of work yet to be done.”

Weather created a challenge on some days.

“We could not fly a helicopter to bring airbags and tools to the rock face,” said T. J. Blake, CDOT deputy maintenance superintendent on one particular day. “Crews had to haul everything up by hand and that set us back several hours.”

In addition to the challenges the weather caused for the mitigation progress, it also created further movement in the rock fall area that crews had to address. In addition to installing 160 lft. (49 lm) of new fencing on top of the barrier, crews worked to bring down more rocks from the mountainside with pry bars, airbags, and some explosives.

Initial repairs were made to the roadway, bridge, and guardrail as necessary, while working towards designing a follow-up mitigation project and providing project cost estimates. It is estimated that the damage caused by this rockslide event could range from $2 million to $5 million.

Once the interstate was deemed safe for travel, a pilot car configuration was set up to direct single-lane, alternating traffic along a 6-mi. (9.6 km) section, with traffic being staged on the east side of Hanging Lake Tunnel and the crossover at the Grizzly Creek rest area further west. The Grizzly Creek, Hanging Lake and Shoshone rest areas were closed during the duration of the pilot car operation. Bair Ranch (on the east side) and No Name (west side) rest areas remained open.

“Certainly this is the longest closure that we've had for a scaling effort in my experience working on the Western Slope in the last 20 years,” said David Eller, regional transportation director. “The challenge here is that you can only put so many people in the slide zone at a time and proceed safely.”

“For example, in the last couple of days we have dislodged four boulders weighing between five and six tons each,” he said.

On Feb. 25, a new configuration was announced in a media conference call.

“We have some good news,” said Ford. “We are excited to announce that we are going to be able to open the corridor in our head-to-head operation by this afternoon, and I'll give you a sense of what that is and what it isn't. As we told you, we thought we'd be in the pilot car situation for several days — we have certainly been there now most of this week, and we have been working very, very hard. We've continued to do some of the rock fall mitigation on the road as we come in and continue to protect this environment — we are in the process of placing fences on the westbound lane, and we will be continuing to do that here through the next few weeks.

“Our helicopter has been flying in and out as we have been getting started on the permanent rock fall mitigation and that is going to be a long term ongoing process, and more specifically, on the eastbound lane, we had several holes on our shoulders where they had been pushed through by the rocks, and what we have been able to do is to plate those and verify that they are safe. We have gone in and moved barriers and the like, and what we have been able to do now is starting this afternoon, by about 4 [p.m.] or so, we will be opening the corridor in a head to head configuration.”

Ford noted that they would be in a restricted environment as far as how wide the lanes are. Specifically, there are 12-ft. (3.65 m) wide lanes, but because of rock and the condition of the plates covering up some of the holes, there are no shoulders.

“So because of that, from a safety environment perspective, we are going to continue to run the head-to-head traffic behind a pace car — not a pilot car — going eastbound, and there will be a pace car going westbound,” she said. “So what cars will do as they come into this environment, is they will still stop at a controlled space as you're coming into that 6-mile corridor — that's where we've had the stops before. A pace car will take them down the road and then release them on the other side, and they'll turn around and bring back the next side. There will be two cars going in this configuration in a 24-hour operation, which means that we will not be having the long term closures from 9 a.m. to 4 p.m. throughout the middle of the day the way we have been for this last week.”

Ford noted that there would still be delays and intermittent closures due to the additional work occurring in the area.

“For instance, if we're flying in our helicopter and we need to land for getting equipment and that kind of thing on the mountain, we will be holding the traffic,” she said. “When we do all of that, with that additional work, we will do a lot of advance notification on our signage and the like to let people know how long that closure will be, but it will not be a 9 to 4 closure — a shorter term closure. What we do hope though is because we will be able to run the head-to-head traffic in the 24-hour period now that we won't have the long queues that have been happening as a result of people waiting for us to open up the pilot car situation. So we're very excited to have gotten to this point.”

Tracy Trulove of CDOT noted that four pace cars would be working, including two Colorado State patrol troopers and two from a traffic control company.

Ford noted that it will be about a month or so before they are able to open two lanes in each direction — back to the original configuration of the highway.