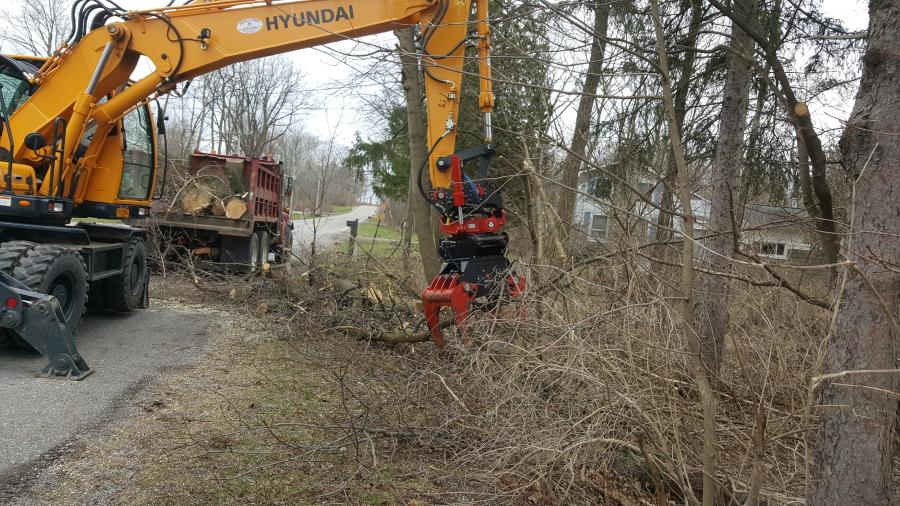 The Hyundai 180W-9A 38,000 lb. wheeled excavator equipped with a Rototilt RT60 rotating coupling system being used to clean up brush.

The county purchased a log grapple attachment, a 6-ft. ditching bucket and a 3-ft. digging bucket to give the excavator the ability to work in a wide variety of applications.

“The Hyundai with its rotating coupling system and wood grapple has already proven itself to be extraordinarily valuable to the county in an unfortunate emergency situation,” said Chris Klein, fleet maintenance supervisor of the Genesee County Highway Department.

In March of this year, the Rochester area was struck by an unusual, prolonged, powerful wind event. For several days, the area was hit by a low level jet stream that caused 70 to 80 mph winds to strike, causing, among other things, a significant amount of downed tree and limb damage that also took out power to more than 100,000 homes in western New York for more than a week.

“We immediately experienced the benefits of having a mobile, wheeled excavator that could travel throughout the county creating no surface damage to our roads and equipped with a highly flexible grapple system that allowed us to work in some very tight situations using just a single employee cleaning up debris in the safest manner possible,” Klein said. “The rotation of the grapple also makes it extremely adept at being able to turn and position cut up trees and to place them very precisely on the back of trucks, allowing us to get maximum load capacity from each vehicle while we clean up debris.”

When purchasing the Rototilt system, there were some design features that attracted Genesee County to Rototilt, specifically when it came to the log grappling system. In most cases, a log grappling system requires that the excavator be equipped with two separate sets of double acting hydraulics, which consists of an approximately $12,000 hydraulic system. The Rototilt system only requires a single set of hydraulics, which reduces the hydraulic system cost by about one-third.

The Rototilt system also has a quick coupling system, which allows hydraulic attachments to be changed out from inside the operating cab of the excavator by a single person in just seconds. This ease of changing out attachments has been available in pin grab systems for mechanical attachments for years, but only until recently has this been an option in a hydraulic coupling system, according to the manufacturer.

“The time and safety benefits are tremendous,” said Klein “A machine can switch from using a 360-degree tilting ditching bucket, to a digging bucket, to a log grapple, all in just seconds. Another added benefit to this is needing just a single machine and a single operator on a project that in the past would have required multiple machines to address various excavating challenges due to the amount of time it would take to change out the hydraulic attachments.”

Phil Marcello, Genesee County heavy equipment operator who is primarily assigned to the Hyundai excavator and its Rototilt system has been very pleased with the equipment.

“I have been very impressed with our new Hyundai and it attachment system,” he said. “When traveling from site to site down the highway at a speed of 23 mph, the Hyundai drives very smoothly. It's very powerful, and when I am working with it, whether it be excavating or loading a load of logs, the machine is very stable.

“When the machine was delivered to us, George & Swede gave us excellent training and shared valuable product knowledge,” Marcello added. “The controls are state-of-the-art with all functions performed by a joystick, eliminating the need for foot controls. When switching out the attachments using the Rototilt, it is great not to have to leave my cab or do any heavy lifting or pounding to switch out the attachments.

The Hyundai excavator has a vibration setting that allows Marcello to evenly spread a load of dirt from the bucket versus dumping the pile and using the sides of the bucket to spread it.

“When doing log and tree work with the excavator and the log grapple, the flexibility of the attachment and the mobility of the excavator has been a great time saving tool,” he said. “The cab has tremendous visibility; the seats are air ride, the cab is air-conditioned, putting me in a very safe and comfortable environment to do dangerous work.”

“The Hyundai three-year warranty, along with a package of standard features that included a backup camera, back blade, air-ride heated seat, air conditioning and solid glass doors, added to the value of this purchase,” Klein said. “We have also been extremely pleased with the support provided to us from George & Swede. Previous to purchasing the excavator, we have also purchased three Hyundai wheel loaders from George & Swede. They give us great support with service and parts. Their inventory of parts satisfies our needs and their response time when service is required has always been exceptional. There was a case where we actually had someone on site within minutes.”

Genesee County is located in western New York State about halfway between Rochester, N.Y., and Buffalo, N.Y. The county has a population of 58,000 and covers an area of 500 square miles.