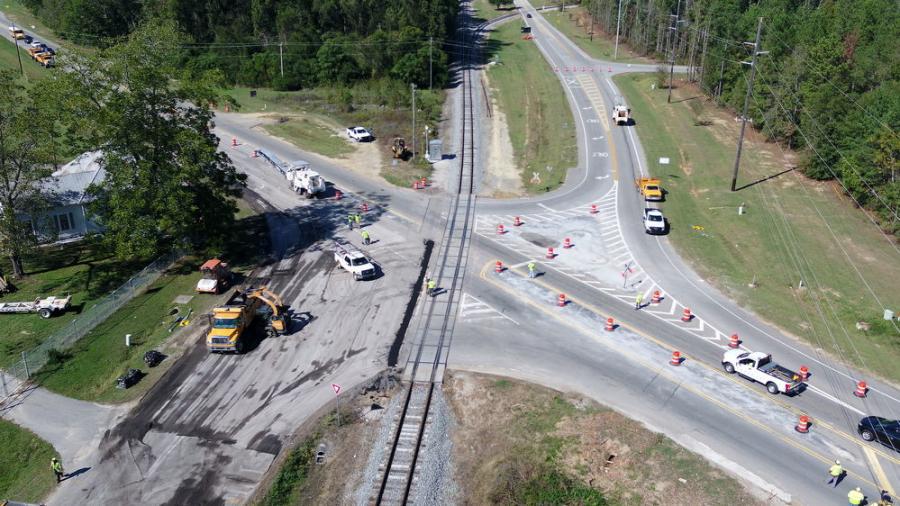 An overhead view of what the intersection looked like prior to GDOT’s facelift.

The city of Sandersville recently received a new distinction — it is the only municipality in the state of Georgia that includes a roundabout with a railroad crossing in the center.

The reconfiguration of the GA 242 intersection at Hospital Road and Waco Mill Road just inside the Sandersville city limits was recently completed at the beginning of this year. According to Kyle Collins, district communications specialist of the East Central office of the Georgia Department of Transportation (GDOT), construction was completed for less than $200,000 under the Quick Response program for traffic operational projects. 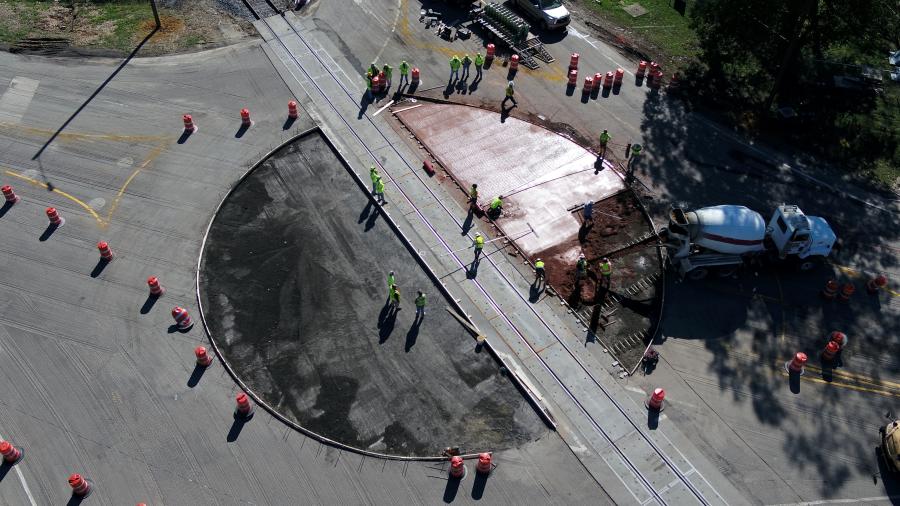 The official start date for C & H Paving, the prime contractor, was Nov. 1, 2019. Collins stated that the project ran later than planned because cold weather delayed the striping. Final work was completed on Jan. 6, 2020.

Todd Price, GDOT district preconstruction engineer, reported that requests for a change to the intersection began in the summer of 2017. An earlier project that opened to traffic in July 2014 reconstructed this location to give drivers a "right out only" scenario to access GA 242 coming from Hospital Road or Waco Mill Road. In addition, left turns from GA 242 were restricted, which made traffic loop around to connector roads to the east at Ridge Road or to the west near East Church Street.

According to Collins, motorists were not following the traffic rules and some of the maneuvers were unsafe.

Ben Tarbutton III, president of the Sandersville Railroad, was wary of the roundabout concept at first.

"When then District Engineer Jimmy Smith mentioned to me the roundabout concept, I went to the intersection and viewed the traffic flow," Tarbutton said. "The public was using parts of the configuration as a roundabout already. I told [Smith] that if GDOT was able to configure a roundabout that did not increase our grade crossing surface width that we would go for it, and they took it from there."

Price noted that a train going through the center of a roundabout was a new concept for the state.

"When we researched it early on, we only ran across a few in the entire U.S.," Price said. "Pressure came from that aspect knowing whatever we put on the ground had to work."

GDOT Design Engineer Foster Grimes served as a Sandersville roundabout plan leader. He stated that he focused on providing a workable layout.

"I felt like we could get the large trucks through there safely," he said. "We had enough pavement and width to build this existing space. It's great knowing that we have something unique to Georgia and the entire country." 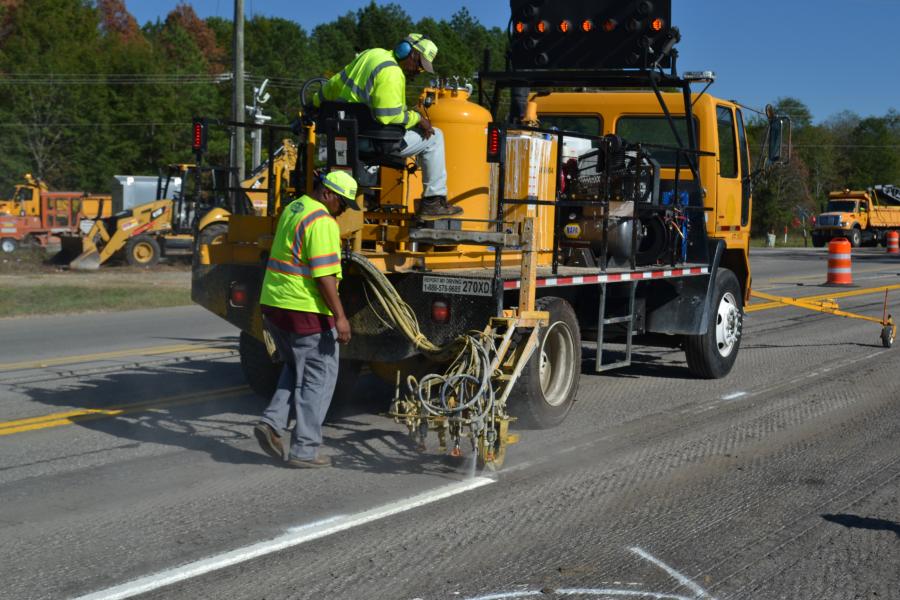 "We were able to gain experience on how these projects actually get built and contribute to cost savings," Frost said. "Conducting these activities in-house was much cheaper than having the contractor do it."

Multiple schedules had to be coordinated to complete the project, including those from the Sandersville Railroad, C & H Paving Inc., C & G Concrete and GDOT. Collins noted that the unpredictable weather conditions leading into the winter months also posed a challenge.

"The Sandersville Railroad worked closely with the project team," Collins said. "They had the crossing arms removed while the work was ongoing."

He noted that extra care was taken when trains passed through the work zone to ensure drivers were alerted.

"Ensuring a safe work environment for the construction workers and the public was our first priority and we were successful in ensuring robust communication between the multiple agencies, contractors and railroad personnel was maintained," said Clay Elrod, general superintendent of the Sandersville Railroad. "Having several state, railroad and contractor workers on site at each stage of construction was recognized early on as a potential challenge for us in ensuring everyone was on the same page. Prior to construction we met with all parties to discuss the planned safety action plan we would later implement listed above and we continued that dialog on the subject throughout the project."

Elrod noted that prior to and during construction, the railroad worked closely with GDOT on several fronts. He explained that a "Stop & Flag" order was in place during construction for all trains approaching the crossing. This required the train crew to physically stop the train prior to entering the at-grade crossing and "flagging" (i.e. ensuring traffic) was stopped for the train with railroad personnel disembarking the locomotive and walking the leading end of the train across the at-grade crossing.

"While GDOT personnel and/or road construction contractors were present at the job site, we also had a railroad employee at the crossing to communicate with approaching trains and GDOT workers to ensure all construction work near the crossing was halted and personnel clear of the tracks before trains were allowed to pass through," Elrod explained. "Since the existing active at-grade crossing signals were temporarily removed and relocated during construction, we provided portable crossbuck signage which GDOT was able to mount to stands, providing motorists with railroad signage they are accustomed to seeing at each entrance to the intersection." 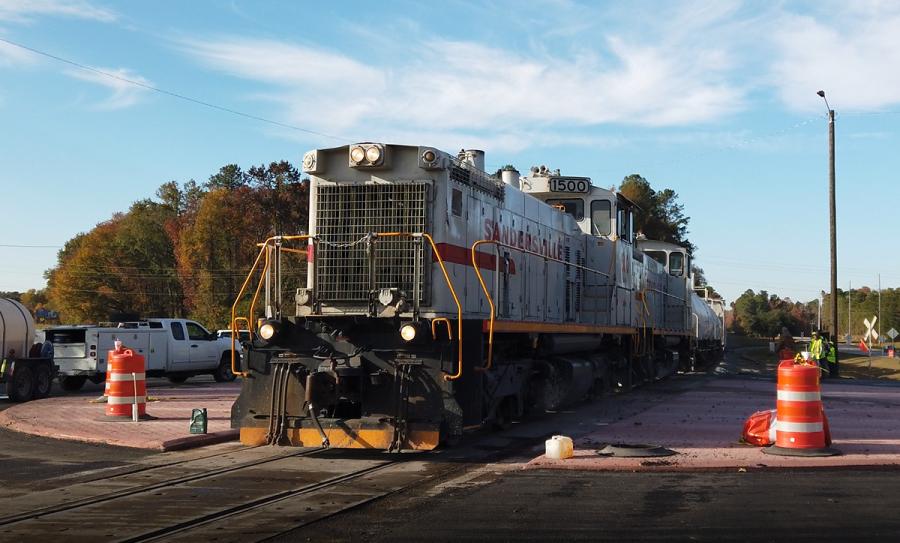 Collins noted that there were really only two subcontractors for this project. Progress Rail, a sub for the Sandersville Railroad, did the gate install. C & G Concrete of Atlanta did all of the concrete work on site.

Collins also reported that the city of Sandersville erected four streetlights for visibility. Active warning railroad devices, such as gates and lighting, were installed to keep the driving public safe during train crossings.

As of 2019, GDOT reported plans to build 20 roundabouts with another 130 on the books to be designed. Daniel Trevorrow, alternative intersections supervisor of GDOT Traffic Operations, said the modern roundabout features two main elements that separate the designs from rotaries and traffic circles that exist in other states or countries.

Every approach is yield-controlled with those in the circle having priority and a slow speed environment, typically 25 mph. The geometric layout is established to achieve those two keys.

Trevorrow said that although roundabouts boost traffic flow, the main perk is safety.

"National studies show huge crash reduction percentages," Trevorrow said. "We are having success in Georgia when it comes to reducing serious crashes with roundabouts." CEG