On a recent hot summer day at a building site in north Raleigh, excavators and bulldozers were busy working to grade the site for a future Lifetime Fitness location. 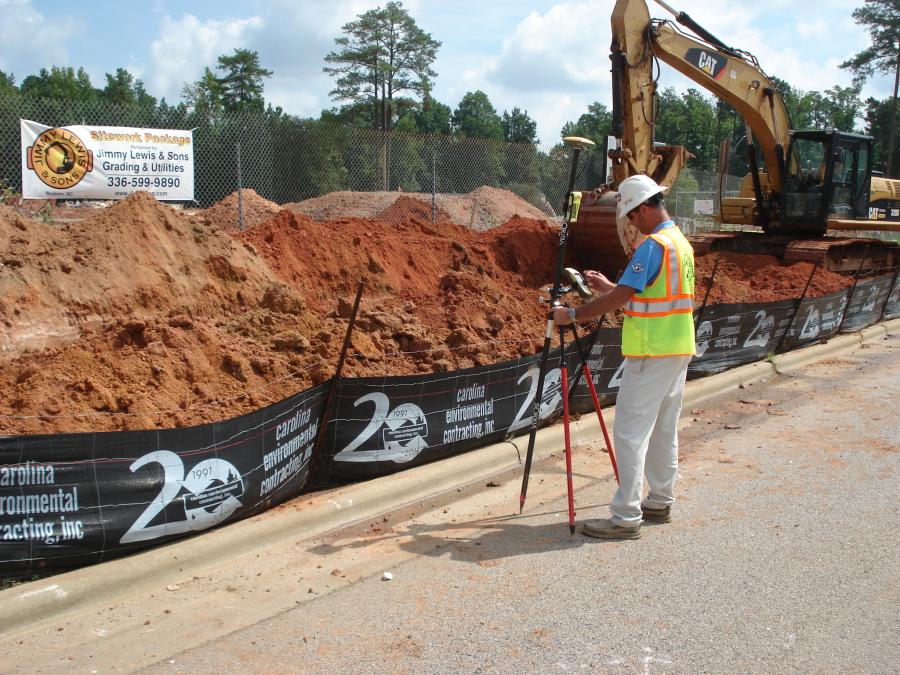 Carter Lewis checks the grade and layout of the project using the Topcon GRS1 system with a Wi-Fi modem connected to the NC VRS Network.

On a recent hot summer day at a building site in north Raleigh, excavators and bulldozers were busy working to grade the site for a future Lifetime Fitness location. The health and fitness center is being built to serve the area’s growing number of residential neighborhoods

At the center of the work was a bevy of equipment operators from Jimmy Lewis & Sons Grading and Septic Tank Services Inc., a 45-year-old company based northwest of Raleigh in the Person County town of Roxboro.

Jimmy Lewis & Sons have worked on the 16-acre Lifetime Fitness site completing grading and erosion control, installing the water, sewer and storm drainage; bringing in and putting down ABC stone; and doing the asphalt paving, as well as the curb and gutter work.

Making the job significantly easier for the company is the fact that it uses Topcon Positioning Systems products in its excavators and dozers. Topcon is among the most reliable and popular makers of GPS systems that use automated grade control technology.

For the last few years, Jimmy Lewis & Sons has been provided with its Topcon systems thanks to Raleigh’s Benchmark Tool & Supply Inc. The dealership has worked closely with Jimmy Lewis & Sons to keep it updated on the newest Topcon technology. Topcon’s latest blade-control automation system, the Machine Control (MC) system, is now being used by the Roxboro contractor.

The advantages of the MC technology are very apparent to Lewis and his operators.

“We like it because of the speed at which it allows us to work,” Lewis said. “The operator knows where he is at all times, he knows his cut and knows his fill. It just speeds up the process and it is easier to put on grade the first time. The operator can see on his screen where he needs to be and at what elevation he needs to be vs. having a man or two on the ground checking the grade or having the operator get off and on the machine to check the grade.

“I would say that by using this system, we are getting the job done 30 to 35 percent faster, especially when it comes down to finish grading.”

Benchmark has been conscientious helping Carter’s company match the right Topcon systems with his equipment. For instance, the Topcon X-63 Indicate Excavator Control System has been installed in a Komatsu 300 excavator used by Jimmy Lewis & Sons. The MC² system is utilized in the company’s Caterpillar D5 and D6 dozer.

“The X-63 system shows the operator where his desired cut elevation is at all times,” said Lewis. “So it basically shows you where you need to be and it shows your bucket coming across the proposed line so that you then know when to stop cutting.”

He added that his firm employs an engineer or surveyor to build a model of each job site that can then be digitally downloaded onto the X-63 system (MC²), as well as onto Topcon’s GRS-1 (geodetic rover system) handheld receiver and field controller. That allows the excavator, the dozer, and the guys on ground, each with handheld GPS, to know where they are on the site at all times.

“What we do is we set that at just a couple tenths above sub-grade, we cut to that mark and then we let the dozer come in behind it and clean it up.”

Lewis said that his firm used its MC² system-equipped bulldozers to place sub-grade for 5 mi. (8 km) of new railroad tracks at a CertainTeed gypsum board plant on Hyco Lake, near Roxboro. Additionally, through Benchmark, he bought a pickup truck mount for a Topcon GRS-1 in order to ride along the rail line to double-check the grades and perform layout work.

Lewis first became aware of the array of Topcon products several years ago during a Benchmark-sponsored event.

“I was invited to ’Clay Day’ where they teamed up with an equipment company and had some demos on display,” Lewis said. “I was interested in what Topcon was all about, got to talking to Benchmark’s representative John Mooney about it and was soon sold on it.

“Benchmark has really provided excellent support over the years,” Lewis siad. “I can’t say enough about John and Mike Gaillard. They have been a great help — John on the sales and support side and Mike on the machine control.”

Jimmy Lewis and his wife, Portia, started the company in 1969 with one truck and a single backhoe, digging footings and installing septic systems. One of their first projects was a Collins & Aikman plant in Roxboro.

“My mother’s father was a contractor and he helped them get started,” Lewis said. “He knew the general contractor there and was able to get my dad started on the ground level. He grew from there to small site work projects and residential clearing, grading and septic installation.”

The company used to do lots of residential work, which once accounted for as much as 80 percent of its work. Now, Lewis said, new-home sites make up only about 10 percent of its business, with the rest being commercial and industrial site work.

The Lifetime Fitness development is one of the largest site projects that Jimmy Lewis & Sons has ever worked and the firm currently has five projects alone going in Durham, including a Residence Inn and an Aloft Hotel, as well as three apartment complexes.

After graduation from high school in 1995, Lewis joined the company with his father and slowly began learning the commercial side of the business. Later, his brother, Retrac, came on board, as well, and now serves as vice president of the company. Retrac also runs the septic tank division and manages the residential business.

Besides being president, Lewis runs all of the firm’s commercial sites and manages the estimating and bidding team, which includes Jonathan Hatton and Melanie Hill.

Now 70 years old, Jimmy Lewis is still very active in the business, but, Carter said, only if he can keep working in the field.

“My dad will never retire,” Lewis said. “He gets out here and runs the equipment and loves the GPS systems. He doesn’t do the meetings or answer phone calls as much anymore. He just gets on the bulldozers and goes to work.”

Besides employing the Topcon guidance systems with no trouble, he said his dad also uses a smart phone and has a tablet with all his job sites and drawings downloaded onto it.

“Of course, he knows how to grade the ’old school’ way, but he knows how nice it is to have the GPS and look down at the screen and know he is precisely on grade.”