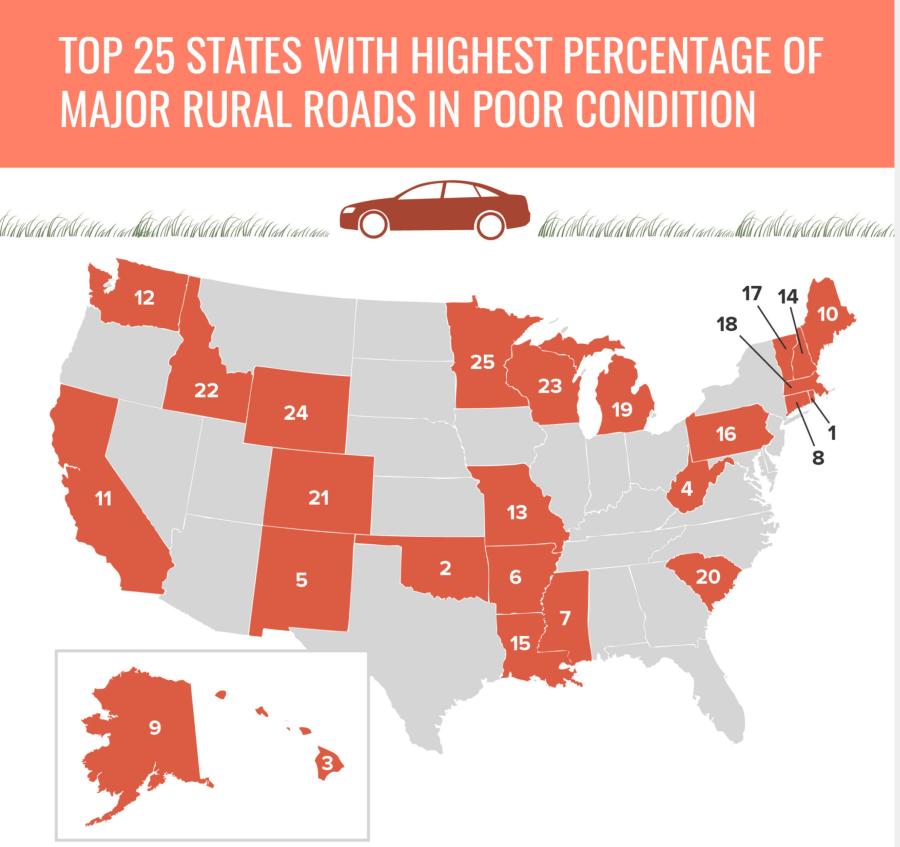 The report, Rural Connections: Challenges and Opportunities in America's Heartland, evaluates the safety and condition of the nation's rural roads and bridges and finds that the nation's rural transportation system is in need of immediate improvements to address deficient roads and bridges, high crash rates and inadequate connectivity and capacity.

The importance of the rural transportation system as the backbone of the nation's energy, food and fiber supply chain has been heightened during the response to the COVID-19 pandemic. Addressing the nation's rural transportation challenges will require a significant increase in investment, but the tremendous decrease in vehicle travel that has occurred due to the COVID-19 pandemic is estimated to reduce state transportation revenues by at least 30 percent — approximately $50 billion — over the next 18 months.

The report finds that the nation's rural roads and bridges have significant deficiencies. Thirteen percent of U.S. rural roads are rated in poor condition, while 21 percent are in mediocre condition. Sixteen percent of the nation's rural roads are in fair condition and the remaining 50 percent are in good condition. Eight percent of the nation's rural bridges are rated in poor/structurally deficient condition, meaning there is significant deterioration to the major components of the bridge. Poor/structurally deficient bridges are often posted for lower weight or closed to traffic, restricting or redirecting large vehicles, including agricultural equipment, commercial trucks, school buses and emergency services vehicles. Forty-seven percent of rural bridges are rated fair. A fair rating indicates that a bridge's structural elements are sound, but minor deterioration has occurred to the bridge's deck, substructure or superstructure. The remaining 45 percent of rural bridges are rated in good condition.

"This report reinforces what many rural Americans already know — our country's rural infrastructure is crumbling," said Todd Van Hoose, president and CEO of the Farm Credit Council. "The competitiveness of our farmers and ranchers relies on an aging network of roads, bridges, waterways and railways that need an immediate infusion of investment dollars. That's why we have partnered with more than 250 national, state and local organizations through the Rebuild Rural Coalition. Previous funding opportunities have overlooked our rural infrastructure in the past. We must invest in the transportation network that drives the base of our economy. We must invest in all aspects of rural infrastructure. And we must do it before we lose our competitive advantage."

"Farmers and ranchers depend on rural roads, highways, and bridges to move their products to market," said Zippy Duvall, president of the American Farm Bureau Federation. "So does the integrity of our food supply chain. Unfortunately, due primarily to lack of investment over several decades, America's infrastructure is in a dire state of rapid deterioration, and recent events show even more the importance of guaranteeing food arrives where it needs to be. Investment in rural infrastructure going forward is paramount to ensure farmers and ranchers can continue to reliably supply the safe and wholesome food Americans need into the future."

The TRIP report finds that traffic crashes and fatalities on rural non-Interstate roads are disproportionately high, occurring at a rate more than double that on all other roads. In 2018, non-Interstate rural roads had a traffic fatality rate of two deaths for every 100 million vehicle miles of travel, compared to a fatality rate on all other roads of 0.88 deaths per 100 million vehicle miles of travel. Rural roads are more likely to have narrow lanes, limited shoulders, sharp curves, exposed hazards, pavement drop-offs, steep slopes and limited clear zones along roadsides.

"You cannot stock grocery stores, resupply medical facilities and rebuild our economy on the backs of broken roads and aging bridges," said Stephen E. Sandherr, the chief executive officer of the Associated General Contractors of America. "Without new federal funding, we will miss this unique opportunity, with traffic at record lows, to repair our rural roads, protect countless construction jobs and restart our stalled economy."

The TRIP report found that America's rural population, which had declined slightly from 2010 to 2016, has since increased, adding an additional 54,000 people from 2016 to 2018. The modest rebound in rural population is likely a result of increased employment and declining poverty, the report found. The rural poverty rate, which is the percentage of people who are making below the amount of money deemed necessary to have a basic standard of living, decreased from 18.5 percent in 2013 to 16.1 percent in 2018, the TRIP report noted.

An analysis of the Status of the Nation's Highways, Bridges and Transit, 23rd Edition, submitted by the United States Department of Transportation (USDOT) to Congress in 2019, indicates that the nation's annual $28 billion investment by all levels of government in rural road, highway and bridge rehabilitation and enhancements should be increased by 28 percent, to approximately $36 billion annually, to improve their condition, reliability and safety.

America's rural transportation system provides the first and last link in the supply chain from farm to market, connects manufacturers to their customers, supports the tourism industry, and enables the production of energy, food and fiber. Rural Americans are more reliant on the quality of their transportation system than their urban counterparts.

"This report shows infrastructure investment must go beyond our nation's major cities and be made in America's rural communities where our food, fiber, and fuel is produced and much of our equipment is manufactured," said Dennis Slater, president of the Association of Equipment Manufacturers. "Manufacturers depend on the roads, bridges and highways in rural America to supply the equipment our economy relies on and that infrastructure is in desperate need of repair and modernization. This is especially true today as our nation fights the COVID-19 pandemic and hopefully looks to rebuild the economy in the weeks ahead. That's why we need our lawmakers to prioritize policies that support the movement of essential people and goods now more than ever."

"The health of the nation's economy and the safety and quality of life in America's small communities and rural areas ride on our rural transportation system. The nation's rural roads and bridges already faced a significant funding shortfall, and that will only be exacerbated by the looming reduction in state transportation revenues as a result of decreased vehicle travel due to the COVID-19 pandemic," said Dave Kearby, executive director of TRIP. "The economic recovery from the pandemic could be hastened by significant investments in our nation's transportation system to support job creation while making needed improvements to our roads and bridges that will serve our economy and enhance quality of life for all Americans for decades to come." 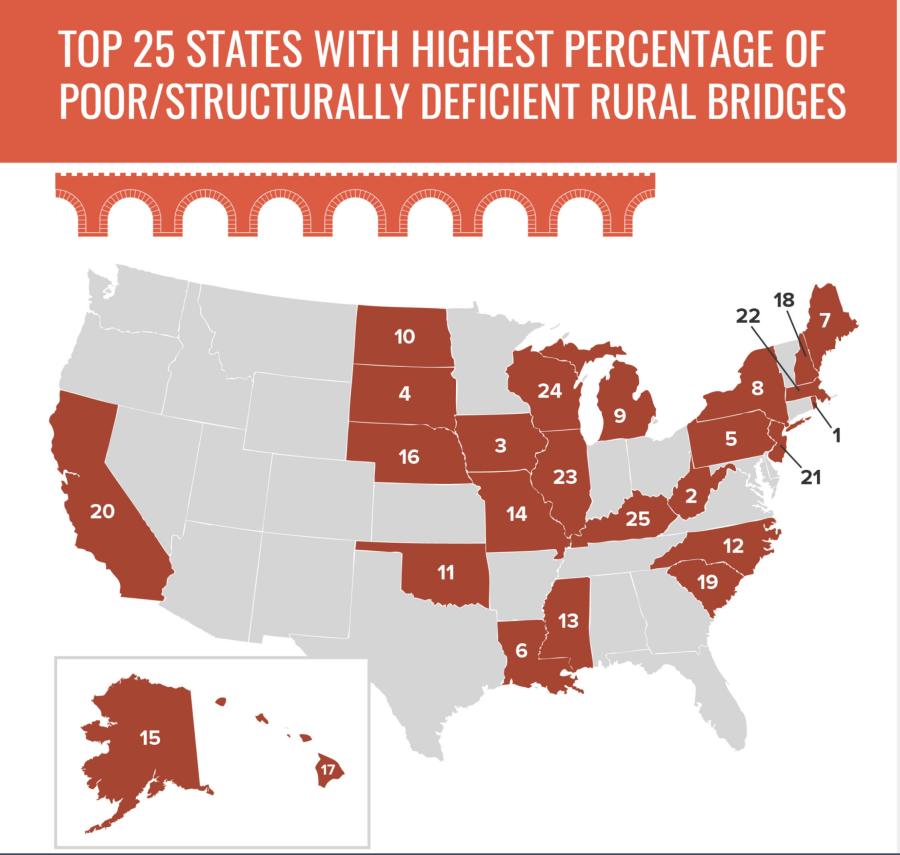